Lots of bloggers and news outlets are reflecting on the debate last night, which most agree that Bill Nye won. Below is a collection of what I have come across. But first, here is the debate for those who missed it and want to watch it online:

Josh Rosenau of the NCSE reflected in detail on how Bill Nye won the debate.

Biologos has several of its fellows commenting and reflecting in a single post.

P. Z. Myers and Jerry Coyne both note that a poll by Christianity Christian Today suggests that Christians feel strongly that Bill Nye won. I suspect that more Christians were hoping Nye would win than most atheists would believe. I wonder how many people who give Ken Ham kinds of answers on surveys are actually being dishonest, afraid that their answer might get back to their church leaders and get them in trouble. Perhaps the state of science acceptance is better than the state of acknowledgement of science acceptance.

Matt Stopera has a photographic round-up of questions from young-earth creationists, most of which illustrate their appalling level of scientific illiteracy.

Ken Schenck was left depressed by the whole thing. I don't agree with his “naturalism is a presupposition” point. If scientists suddenly found that there were indeed fossils in places where current evolutionary theory says they could not be, then the theory would have to change. That is the point I summed up in the meme image I made and shared yesterday. Even atheist scientists who disliked the Big Bang theory because it reminded them too much of Genesis came to embrace it, because of the evidence, just as most Christians did with the age of the Earth when the geological evidence began to pile up (pun intended).

Rachel Held Evans shared some of her previous posts related to evolution and Christianity.

Hemant Mehta asks if the debate was worth it. John Loftus thinks it was and would like to see many more debates of this sort. Jason Rosenhouse explains why he thinks that young-earth creationism has to be approached differently than Holocaust-denial.

Tom Foreman, the debate moderator, reflected on the experience.

Brandon Robertson emphasized that Ken Ham does not speak for him.

Johnny Scaramanga had a piece published in the New Statesman.

Joel Watts thinks Al Mohler's supposedly post-debate comments must have been written even before the debate took place. Travis Mamone also reflected on the debate.

CNN surveyed some of the terrible jokes, as well as the content. 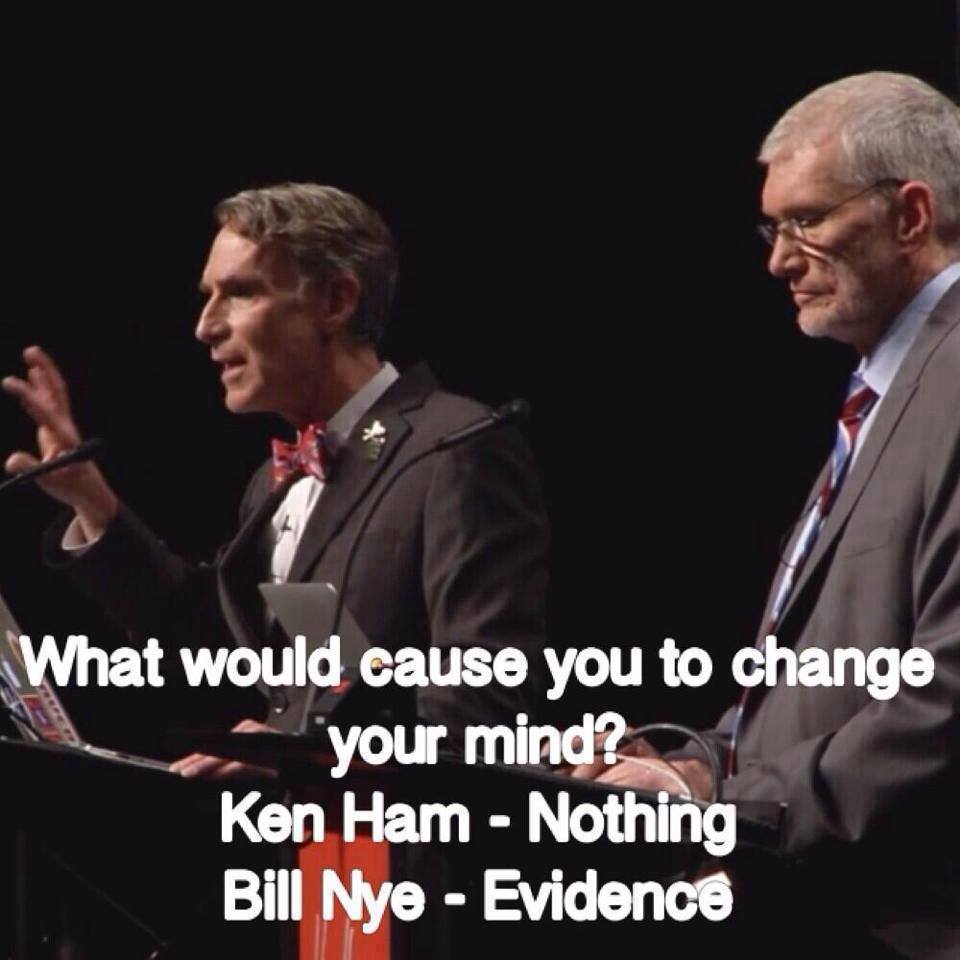 February 5, 2014
People Who Debate Creation vs. Evolution
Next Post

February 5, 2014 What Ken Ham Didn't Say #hamonnye
Recent Comments
17 Comments | Leave a Comment
"Probably the same religion that brought us public schools, mass public hospitals, the scientific revolution, ..."
Chris H Michele Bachmann Cites Famous Social Justice ..."
"I wonder what religion it was that was responsible for the genocide of the Native ..."
Hutchins Michele Bachmann Cites Famous Social Justice ..."
"It isn't necessarily the case that her name was "changed" any more than "Saul" was ..."
James F. McGrath What Jesus Learned from Junia
"Have you by any chance had occasion to read the book, and perhaps now be ..."
James F. McGrath What Jesus Learned from Junia
Browse Our Archives
get the latest updates from
Religion Prof: The Blog of James F. McGrath
and the Patheos
Progressive Christian
Channel
POPULAR AT PATHEOS Progressive Christian
1