I couldn’t resist (with inspiration from a Facebook comment by Carl Beck Sachs) using this Star Trek phrase in reference to the range of views that scholars hold on the hypothetical document Q, proposed to explain the overlaps between Matthew and Luke on material that is not in Mark. (See the bottom of the post for an image that takes the connection further).

Mike Kok has been exploring the evidence for Q on his blog, asking whether Luke knew Matthew’s additions to Mark and Matthew’s special material. The posts highlight important aspects of the question.

And so there is good reason why we do not have an overwhelming Q consensus, but a “Q continuum.” And it makes for a vibrant field with lots of potential for ongoing research.

But I do worry that there are some outside of the field of Synoptic Gospel studies who may be inclined to jump on a particular bandwagon, not because of a decisive case that has been offered for that viewpoint, but because they think it is the clear and definitive solution, only because of a lack of familiarity with just how complex and ambiguous the evidence really is. 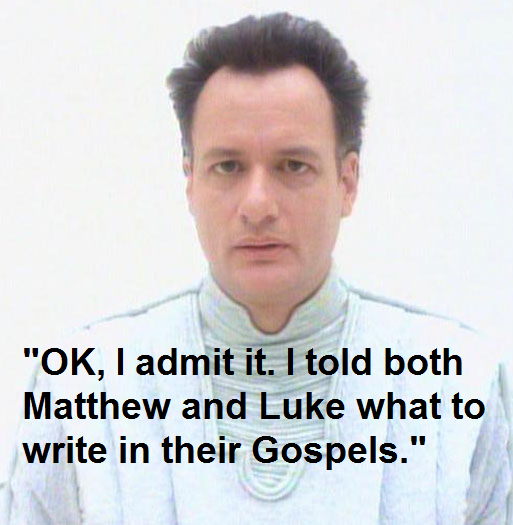 February 18, 2014 Holding Out for a Rapture
Recent Comments
5 Comments | Leave a Comment
"This can be very straightforward. When conception occurs the Spirit of Man enters the fertilized ..."
Bob Shiloh Calling Trump an Antichrist
"I hate that :/"
Sean J Bauman Calling Trump an Antichrist
"I appreciate the comment but was confused by your apparent attribution to me of the ..."
James F. McGrath The Social Status of Jesus
"Yes, indeed!"
James F. McGrath Take Up My Yoke
Browse Our Archives
Follow Us!

America’s New Religion and the Scandal...
What God Wants for Your Life
Books by This Author Books by James F. McGrath