Some might think, given the headline, that this post would be about Richard Carrier. But mythicists aren’t the first or the only fringe stance to try to use math to obscure the weakness of their arguments. P.Z. Myers drew attention to a response to Michael Behe that Ken Miller posted online. You can read it here. PZ writes:

It’s exactly the same game Behe is playing. It was crude, stupid, and ridiculous when J. Random Creationist was doing it, and it’s even worse when a guy with a Ph.D. in biochemistry, who ought to know better, panders to the mob of creationists who don’t even grasp middle school mathematics by using fallacious operations in probability.

Couching dubious arguments in math may impress some, but sooner or later, someone with the patience to engage the math as well as the substance of the arguments will come along to address it.

The problem is that people whose math was weak enough to be fooled by the initial claim, will also be open to being fooled into believing that the response is unpersuasive.

Here’s what Miller wrote by way of introduction to the piece on his website:

Suppose you published a book making a set of very specific claims. Then, after highly critical reviews of your book are published in major scientific journals, an international research team publishes a detailed study in the Proceedings of the National Academy (PNAS) on the very system that was the focus of your book. Great news?  Well, maybe, except for one little problem. That research paper shows, in great detail, why the claims at the heart of your book were wrong. Do you walk away quietly, hoping no one notices?

Not if you’re Michael Behe. Instead, you declare victory, tell everyone who will listen that the research actually vindicates you, and then get your friends at the Discovery Institute to demand apologies from those who had criticized your book. In the strange world of “intelligent design” (ID), that’s how things seem to work. When new scientific findings support evolution, the ID crowd tries to spin things around by pretending they actually contradict it. They’ve done this before, and they’ll probably do it again.

And here’s another sample from later in the article:

Interestingly, Behe’s kind of math would apply only in one very special situation, and that would be if both drugs were applied in similar doses at exactly the same time, so that the emergence of resistance to one would be useless without the simultaneous appearance of resistance to the other. That, in fact, is the reason that multiple drug therapy can be effective against HIV and other diseases. By manipulating the doses of several anti-viral drugs at once, it’s possible to prevent the emergence of resistant strains of the virus. But this situation only prevails under carefully designed therapeutic conditions. You might say, ironically, that it takes “intelligent design” to produce conditions favoring the long odds he demands, conditions that don’t exist in nature.

Click through to read the entire thing. See too Larry Moran’s response to another Intelligent Design proponent.

December 5, 2014 Irrelevant to the Outcome of the Story
Recent Comments
4 Comments | Leave a Comment
Browse Our Archives
Follow Us! 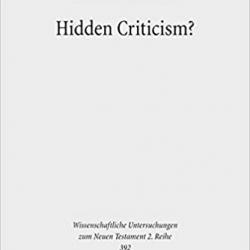 Progressive Christian
Is an Appeal to Consensus an Argument?
Religion Prof: The Blog of James F. McGrath

Faith in a Time of Pandemic - God's...
CV God’s Steadfast Love Endures Forever (7/11) O give thanks to God;...
view all Progressive Christian blogs
What Are Your Thoughts?leave a comment
Copyright 2008-2020, Patheos. All rights reserved.