Doctor Who: The Talons of Weng Chiang

The Talons of Weng-Chiang

is an episode that one could discuss from many perspectives – including an examination of whether it mainly reflects, or at times challenges, racist stereotypes about the Chinese. The choice of a British actor not of Chinese descent to play the main Chinese character is certainly an odd one. And does the presence of slurs represent prejudice or merely an attempt to be historically authentic to its Victorian setting?

The Doctor refers to the criminal gang known as the “Tongue of the Black Scorpion,” and describes their worship of the god Weng Chiang as “superstitious rubbish.” That god was responsible for abundance and making things grow. As always, there is a reality to the god in this episode, and Li H’sen Chang, a magician who serves the god, is also in possession of real powers, having been granted mental powers thousands of years ahead of his time. We ultimately learn that the god is in fact a human time traveler from the future, deformed by the temporal distortion in his only partly successful time travel experiment. The Doctor recognizes the technology, and also the small figure that he recalls as being the “Peking Homunculus” – created to entertain small children, with the cerebral cortex of a pig, it went awry and almost caused World War VI around the year 5,000. And he learns that the person pretending to be Weng Chiang is in fact Marcus Greel, a wanted war criminal in the future, known then as the “Butcher of Brisbane.”

Some of the most interesting discussion on religious themes involves Chang, who seeks to appease his god after having failed him, then comes to hate him. The Doctor asks Chang at one point, “You know he’s not a god, don’t you?” Chang replies, “He appeared as a god, in a cabinet of fire.” Before dying he also mentions seeing his ancestors welcoming him, and refers to the jade bridge of the gods.

In addition to these familiar ideas – things that seem supernatural being either human possibilities in the future, advanced technology, and/or aliens – there is also one more connection with religion, when the Doctor refers to having caught a fish from the river Fleet (now completely covered over) and having shared it with the Venerable Bede. 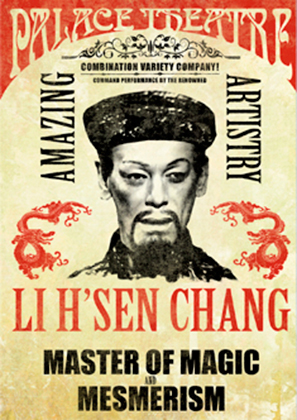 Poster (based on one that appears in the episode) by JGL Design.

March 21, 2015 BioLogos on Patheos
Recent Comments
6 Comments | Leave a Comment
"Yes, of the tribes other than Judah, Benjamin is the one that is likely to ..."
James F. McGrath “To Your Tents, O Israel!” A ..."
"Lol Candace Owens....Candace Owens is a wingnut commentator and rising airhead of the young conservative ..."
Bones Understanding Whiteness
"Is this about Jesus or Dr King? I'm confused."
Robert Limb Historical Jesus Comparisons
"You have provided no basis for your assertions. Until you do my post from real ..."
Bob Shiloh Understanding Whiteness
Browse Our Archives
get the latest from
Religion Prof: The Blog of James F. McGrath
Sign up for our newsletter
POPULAR AT PATHEOS Progressive Christian
1