The episode begins with Sawyer making Jin some tea. Then Smokey and his group return. Kate asks Claire about the thing in the crib, and she says it was all she had. When Cindi asks Smokey what happened to the people who stayed behind at the temple, he says that the black smoke killed them. He them reassures the children who are scared. We see the boy carrying a teddy bear. When Saywer asks what happened at the temple, he says that he is the “smoke thing.” He sends Sawyer to do some recon, to see what the other survivors of the Ajira flight are planning, since he believes they mean to do them harm. He wants to use the plane to leave the island. Sawyer finds a bunch of dead bodies on Hydra Island. Then he sees a woman running through the jungle and chases her. She says she is the only one left. When he says he can take her to his group on the main island, she says “Thank God,” and he replies, “God has nothing to do with it.” The woman calls herself Zoe. Sawyer pulls a gun but then she whistles for her people in the bushes, who have guns. They take him to a submarine (on the way passing a small sonic fence being set up). He is taken to Charles Widmore. Sawyer tells him that he will bring “Locke” to his doorstep so that he can kill him. He says that in exchange he wants safe passage off the island for himself and those with him. He says they have a deal. Then Sawyer goes back and tells him everything. 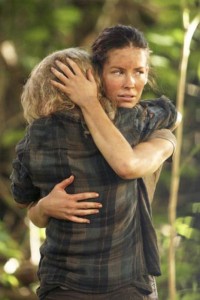 Claire jumps Kate with a knife, planning to kill her for taking Aaron. Smokey intervenes, saying that Kate did what she had to after Claire disappeared, and telling Claire that her behavior is inappropriate. Sayid sits by and watches. Smokey tells Kate that he was the one who told Claire that the Others had her baby. He says that it gave her something to hate, which could help her get through what she was going through, but when Kate told her the truth, that hate got placed on her. Smokey tells Kate that he had a mother who was crazy, a very disturbed woman, and as a result he had some growing pains, problems that he is still trying to work his way through, which could have been avoided if things had been different. He says that now Aaron has a crazy mother too. Later, Claire says she is sorry, she cries and thanks Kate for taking care of Aaron, and hugs Kate.

Sawyer tells Kate that his plan is to get the submarine while Widmore and Smokey fight it out.

In the afterlife, James is in bed with a woman. Then he does the pigeon drop scam with the briefcase of money. She pulls a gun, and it turns out that he is a cop, and Miles is his partner. Later we see him at his desk, calling people named Anthony Cooper. Miles sets him up with a date with Charlotte. She asks him why he became a cop. He says that he came to a point in his life at which he was either going to become a criminal or a cop, and he chose cop. Back at his place, after they make love, she finds his Sawyer file, and he throws a tantrum and kicks her out. The next day, Miles confronts James about going to Australia when he said he was in Palm Springs. That evening we see him eating a TV dinner, drinking beer, and watching Little House on the Prairie. Charles Ingalls tells Laura that people who die aren’t really gone. He goes to Charlotte’s apartment but she tells him that he blew it. James then gives Miles his Sawyer file, telling him the truth for the first time about what happened when he was 9 years old. He says he has been trying to hunt down the grifter and con man named Sawyer ever since he left the academy. He says that when he finds the right Anthony Cooper, he plans to kill him. Then someone crashes into their car and runs, Jamea chases them. It is Kate!

It was interesting to rewatch this episode in view of what we later learn about Smokey and Jacob’s backstory. The entire series has a focus on the baggage that parents leave their children with, and so it was very fitting that that prove to be a key element in the underlying conflict about the island. 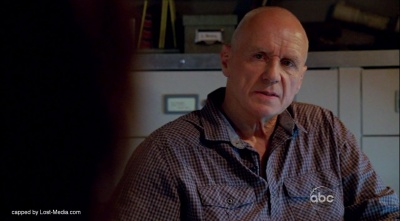 April 20, 2015 The Holy Trilogy
Recent Comments
0 | Leave a Comment
Browse Our Archives
get the latest from
Religion Prof: The Blog of James F. McGrath
Sign up for our newsletter
POPULAR AT PATHEOS Progressive Christian
1 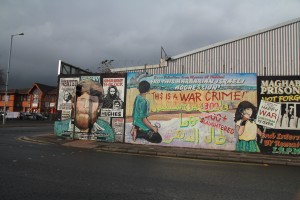