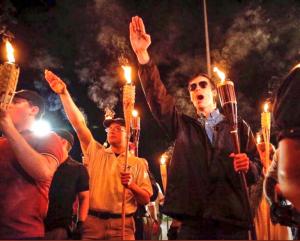 There have long been efforts to ban landmines, primarily for the simple reason that they persist long after the war has ended, when they can blow up and injure innocent people who had nothing to do with the war that led to the creation of the minefield.

Why am I mentioning this at a moment when you’d expect me to be blogging about the Nazi marches in Charlottesville? Because propaganda does the same thing as landmines.

A case in point: The Nazis made efforts to spread their virulent anti-Jewish views to potential allies, including in the Middle East. (If you’re not familiar with this, Jeffrey Herf’s brief article “Hate Radio” will provide an introduction, and then his book Nazi Propaganda for the Arab World, as well as others such as Jihad and Jew-Hatred, can provide still more info if that isn’t enough). They took European claims of Jewish conspiracies and promulgated them, and anyone who has heard a radical Muslim talk about Jews will have heard such claims, and probably will have noticed the similarity.

The Nazis planted ideological landmines in the Middle East, and they are continuing to go off today. The Arabs who embrace those ideas are feeling the impact of weaponized ideas which aimed at turning them into allies of Germany. WWII is long since over, and most Germans today repudiate the views that led to the Holocaust. But the places where those memes were sown continue to be impacted by them, and in turn others are harmed as well. Planting hatred is every bit as dangerous as planting physical landmines – and perhaps more so.

Hopefully you can see the ironies as we consider the conspiracies about Jews voiced by the Nazis in Charlottesville. One of them, Matt Heimbach, turns out to be from here in Indiana. He apparently converted some years ago to (and then was excommunicated from) the Antiochene Orthodox Church, which was brought to the United States by Arab immigrants, another irony. Heimbach expresses the idea that a white genocide is on the horizon, and that he is simply acting to defend his white race. This, of course, is a stance that leads to immigration policies that would keep out the people that brought the faith that Heimbach chose to embrace.

Heimbach and others like him are giving voice to propaganda that includes elements created centuries ago, which were promulgated by our nation’s enemies, and which now flourish not only among Nazis, Klansmen, and other white supremacists, but also among Muslims – whom the former are eager to keep out of “their” country. While some Americans tend to think of Neo-Nazis in the United States as influenced by German Nazism, in fact the direction of influence is the reverse: German racists were influenced by the example of the American South decades before Hitler began his rise to power, and this influenced Hitler and his Nazis.

It is not just propaganda that behaves and causes damage like a landmine. Hatred itself is a landmine. The seeds were sown in the past – sometimes centuries ago, but they have sprouted and spread more recently and then found fertile soil in which to lay dormant until they are watered and invited to find nourishment in the light of the sun once again. The same kind of hatred was used to justify enslavement, then segregation, then discrimination, to say nothing of war against the United States. And on it goes, sometimes taking new forms, but with a clear continuity that can be traced across the years. 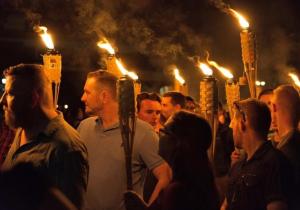 There is, however, one big difference between landmines and hateful propaganda. Landmines, when they blow up, kill other people. Propaganda and hate, when they sprout, will certainly damage the soul, the mind, and the morals of those in which these things take root.

But typically it is others whose lives are lost, who are killed as a result of the “explosion” of hatred “going off.” Another irony in this post is that the same hate-inspired lies about Jews and others can be seen motivating terrorism on the part of both white Nazis and Islamic jihadists. And yet despite embracing the same old propaganda, each will view the other as dangerous, not realizing that it is precisely because of the same sort of virulent propaganda that they view one another in this manner. They will demonize and resist one another precisely because of what they share in common!

And so let’s be sure to notice the sources of the lies that continue to be spouted, and the heritage of the viewpoints and organizations that are becoming more vocal and violent. Even before there was the Nazi party in Germany, there was the Ku Klux Klan. It was founded by people who lost a war that aimed to preserve slavery and destroy the United States in order to do it. They engaged in acts of terrorism. That is what they stand for.

And so don’t believe anyone who sides with these terrorists and yet who claims to be trying to keep the nation safe from terrorists. They may hate other terrorists. But the legacy of the KKK, as of the Nazis when they came along later and looked with admiration at America’s Klan as a model, has always been to achieve their ends through terror.

And then, as now, those who represent love – including but not limited to Christians – must stand against these forces of darkness.

But we must do so in a way that doesn’t fall into the same trap, or step on the same landmine of fear and hate. Acts of hate against the haters, acts of terror purportedly in the interest of ending terrorism but in fact only interested in keeping “us” “safe” from those terrorists, will not end terrorism, but will either foster it in the enemy, or cause it to take root in ourselves, and perhaps both.

And so the minefield will continue to persist and damage if we do that.

Only learning to love in a way that stands against evil while refusing to embrace its terms and methods of conflict can ever clear the minefield – or should I say, the mindfield? – in which hate and propaganda take root. 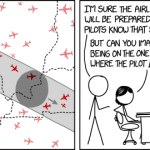 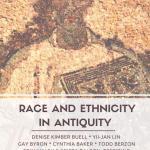 August 14, 2017 Race and Ethnicity in Antiquity at #AARSBL17
Recent Comments
10 Comments | Leave a Comment
"None. Why do you ask?"
James F. McGrath Tampering with the Words of the ..."
"I'm not sure what led you to this bit of satire from almost 13 years ..."
James F. McGrath Obama Confesses To Being Hindu Muslim ..."
"A very long time ago, I realized that Jesus is as much of God as ..."
gloriamarie Divinity and the Learning Jesus
"How in good consciousness can you lie so egregiously, when lying is a sin. And ..."
Bill Hegeman Obama Confesses To Being Hindu Muslim ..."
Browse Our Archives
get the latest from
Religion Prof: The Blog of James F. McGrath
Sign up for our newsletter
POPULAR AT PATHEOS Progressive Christian
1