What Jesus Learned from Junia

I confess that my initial reaction was to dismiss the idea that Joanna and Junia might be references to the same person. But as I resisted the temptation to merely dismiss, and pulled on the thread, I found it led me to discover a number of intriguing intertwined threads that are woven together so tightly that it seems unlikely to be a coincidence. For instance, the tribe of Benjamin (to which Paul belonged) was historically located in and around Jericho, where interaction with other desert dwellers such as the Idumaeans and Nabataeans interacted with the Jewish population. Joanna was the wife of Chuza (a Nabataean name), the property manager of Herod (who was of both Jewish and Idumaean extraction). Paul was a tentmaker by trade, and the Nabataeans historically dwelt in tents, a trade that might naturally have become a focus for a family of the tribe of Benjamin, living as they did at the natural meeting point between Judaea and the Transjordanian wilderness. Junia later married a man named Andronicus, a popular name among those whom the Syrian king Antiochus settled in Cilicia, where Tarsus was located, and Antiochus IV conquered Cilicia and settled a significant Jewish population there from elsewhere in his territorial holdings. Paul had a sister whose family was prominent enough in local civic life that her son could overhear access about a plot against Paul’s life, and be granted access to Roman officials when he showed up with news.

None of this proves anything, obviously. But for Junia to be prominent among the apostles, and Joanna to be among those who were essentially apostles from the description of them in the Gospels, this all seems like more than a coincidence. For Saul’s relative Junia to have been prominent among the apostles and yet unmentioned in early Christian sources other than Romans, and for Joanna to have been prominent among the apostles and yet unmentioned outside of the Gospel of Luke, both seem less likely than that we are dealing with the common phenomenon of Jews using a Jewish name in an Aramaic setting and a similar Greek or Latin one in a Greco-Roman setting. And of those who might opt for Latin, those connected with Herod’s court were among the likely candidates in Palestine, and for Junia to have been a Christian before Paul, that’s the most likely location. Paul’s zeal for his national identity may have been solidified by having a cousin (or other relative) who married a foreigner, and then later it may have been seeing the prospect that his relatives might be killed as a result of his kind of zealous opposition to the Christian movement that created the psychological state that led to his turnaround. As I said, this isn’t “proof” but a striking fitting together of pieces that makes good historical sense.

Once I finish writing the chapter, a lot of this may be even more persuasive – or otherwise, I may have some of the same questions that you do now after reading this brief summary of some thoughts that have occurred to me…

The question of Saul persecuting his own relatives came up in the comments on this post:

Also on this topic: Junia is not alone

Was one of the New Testament apostles a woman?

And a post of mine from years ago, mostly linking to something important elsewhere:

Junia and the Importance of Greek Accents

Connecting Junia and Joanna makes this new entry on the Bible Odyssey website from Helen Bond about the Herodians relevant.

Although we have no evidence that Junia/Joanna visited Corinth, I’ll share this here anyway…

Veils, Hair, and Women at Corinth

Mike Kok will be giving a paper at SBL about another tangled set of traditions and stories that are included in my book:

From a while back, about the woman who is the focus of another chapter in the book: The Truth about Mary Magdalene

The chapters about Mary Magdalene and Joanna are the chapters that seem the hardest to write – ironically, one because there is so little to say with certainty, and the other because there is so much that people at least think they know about her! But I’m excited at the prospect of having a rough draft completed in the not too distant future, and getting feedback with a view to submitting it by next summer.

Finally, let me share the review of To Cast the First Stone that just appeared in Reading Religion recently. 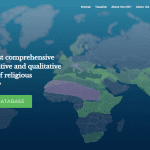 November 22, 2019 Database of Religious History at #AARSBL19
Recent Comments
19 Comments | Leave a Comment
"Intriguingly enough, since you mentioned "No one has suggested that Jesus was merely a carbon ..."
Chris H #JohnTheBaptist Enoch Seminar Nangeroni Meeting Day ..."
"Bestest post,..... My daughter who is incapable of being on the internet due to genetics ..."
davidt Evil In the Youth Group
"From my perspective this comes from a really problematic tendency in neo-liberal thinking to promote ..."
Chris H Jesus Wasn’t Unique
"It definitely seems memeworthy to me!https://uploads.disquscdn.c..."
James F. McGrath Evangelicals, Objective Truth, and the MSM
Browse Our Archives
get the latest from
Religion Prof: The Blog of James F. McGrath
Sign up for our newsletter
POPULAR AT PATHEOS Progressive Christian
1