In the ReligionProf Podcast episode embedded above, I talk to Prof. Ruth Hayhoe, a specialist in comparative education who was recently involved in the production of a book in the field of biblical studies. The backstory is that Ruth is the sister of Suzanne McCarthy, whose writings on her blog I mentioned and linked to on my own blog often. Suzanne sadly died from cancer while working on a book about gender bias in Bible translation, and her sister Ruth, in collaboration with several other family members, made sure it was published. It is now available from Wipf & Stock under the title Valiant or Virtuous? Gender Bias in Bible Translation. In the podcast you can hear more about this story.

Other blogs have talked about the book:

Valiant or Virtuous? by Suzanne McCarthy

Tributes appeared on blogs and discussion boards, including Kristen Rosser’s moving account as well as the following:

Also related to this, Marg Mowczko (who provides one of the endorsements on the book) wrote about texts sometimes used to diminish women. Claude Montonini plans to explore some of those texts further on his own blog:

While the focus of this podcast is Suzanne’s book, I also want to highlight Ruth’s own work as a scholar. Here are three examples from among them: China Through the Lens of Comparative Education (Routledge: World Library of Educationalists, 2015). There is also a podcast where the author is interviewed about the book. Second, a co-edited book, just out in 2018, Religion and Education: Comparative and International Perspectives (Oxford: Symposium books, 2018). Third, Canadian Universities in China’s Transformation: An Untold Story (Montreal: McGill Queens University Press, 2016). A friend is active in the field of comparative education, and teaching in the core about other cultures and nations I often wish I had time to read more widely about the educational approaches and systems in other countries. From my experience of studying in the U.K. and teaching in Romania, I am aware of how significant the differences can be and how they are shaped by and in turn shape a society’s values.

Now, back to the subject of Suzanne’s wonderful book, here are some more links related to ancient and modern women:

For Women In Church, Not Nearly Enough Has Changed

What If Biblical Womanhood Isn’t Biblical?

From the Biblical ‘Woman on Fire’ to Female Kurdish Fighters: The Women Who Mama Up by Tallessyn Zawn Grenfell-Lee

Imagining Motherhood and the Past

Is it a Sin for Women to Wear Pants?

There has been a lot related to remarks by John MacArthur:

Cokesbury to remove John MacArthur books after remarks on women, race, and intersectionality

ERA—Equal Rights for Women—in the US: Has Our Time Finally Come? by Carol P. Christ

Inside Higher Ed had articles on Karen Swallow’s departure from Liberty University and on Women’s Study professors at Southwestern Baptist Theological Seminary.

Letter to the Editor: Experienced Clergy Women Need Not Apply

Racism and Patriarchy—Twin Demons of Abuse

David Raped Bathsheba, and Why That Matters

Why Are So Many Evangelicals Okay with David Being a Murderer, But Not a Rapist?

Women in the Seminary Classroom

An Open Letter to John MacArthur (re: Beth Moore)

Go Home or At Home?

Does Jerry Falwell Jr. Care That He Just Lost a Star Faculty Member?

Why women were singled out in the Salem Witch Trials

More distantly related to the topic is the review of a book about the Sufi mystic Rabi’a that appeared recently in Reading Religion. And finally, from N. T. Wright: 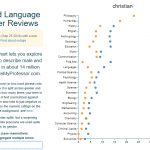 November 21, 2019 What Jesus Learned from Junia
Recent Comments
3 Comments | Leave a Comment
Browse Our Archives
get the latest updates from
Religion Prof: The Blog of James F. McGrath
and the Patheos
Progressive Christian
Channel
POPULAR AT PATHEOS Progressive Christian
1