I have been trying to find a way to turn my feelings into words about recent events. Others have been articulating the most important things that need to be said, better than I could have. And so I will amplify their voices with my own. Sometimes we need to borrow words from others to begin with.

I’ll start with a Facebook friend who said that, if he were still a pastor, he would have called for 8 minutes and 46 seconds of silence in the service on Sunday.

That’s the length of time the police officer had his knee on the neck of George Floyd. He kept it there for minutes after George Floyd was unresponsive.

The editors of the Minnesota news outlet the St. Cloud Times convey the implications of that well:

It was painful to watch people who love Minnesota and the good life we have here come to grips with the casual evil even our Eden holds in its darkest corners.

The difficulty in watching those illusions shatter was nothing compared to the horror of watching what one of us with power was willing to do to another of us without it: crush the light from George Floyd’s eyes as he died face down on a dirty city street, hands cuffed behind him and respectfully asking for mercy.

Floyd died under the knee of a veteran, well-trained Minneapolis police officer. He died while two other officers sworn to serve the public helped hold him down and a fourth stood lookout to keep onlookers in their place. 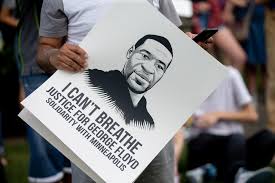 According to the murder charge against Derek Chauvin, Floyd’s neck was under Chauvin’s knee for 8 minutes and 46 seconds. Floyd stopped moving or responding with 2 minutes and 53 seconds left to go before the knee came up.

His alleged crime that day — if he committed one at all, and that is not yet clear —was worth 20 bucks.

For years, skeptics and people who like to assume the best in people (both are traits we admire) have been able to avoid believing that sometimes people die because of deliberate decisions made by officers.

George Floyd’s death has changed that for many.

Floyd did not die in a dark alley where he was mistaken for an armed aggressor. He wasn’t felled by a bullet fired in a split-second decision by an officer who legitimately might be in fear for his life. Floyd wasn’t armed. He wasn’t wearing a menacing hoodie. He wasn’t wielding a toy pistol that looked too real, he wasn’t disrespectful to officers, and he didn’t run. He didn’t do any of the things that have historically left gray area big enough for our denial.

And we all saw the chilling casualness of the man with the knee on his neck, and the absence of action by the other three officers who were not only in a position to save Floyd, but also to bring him to justice if, in fact, Floyd did commit a $20 crime that day.

I live in a country where it is extremely unlikely that a white person suspected of passing a forged check or a counterfeit $20 bill would be executed on the spot for it. I live in a country in which (according to the law of the land, at least) no one is allowed to be summarily executed even for a capital offense, without a trial. There’s no other way to put it than that George Floyd was murdered. The fact that there are police who murder and get away with it show that the system we currently have to address crime prevention in this country is broken beyond repair. I don’t have an alternative to propose. There are at least two ebooks which are currently free that are relevant to this: The End of Policing and Who Do You Serve, Who Do You Protect? Police Violence and Resistance in the United States. I haven’t read them, and this field isn’t my area of expertise, and so I’m not going to propose a solution. But it would still represent progress if the majority of us could agree that we cannot carry on with the police system in its present form. It doesn’t matter that most police may be good people, kind people, compassionate and caring people willing to lay down their lives for others and reluctant to take another’s life even in self defense. The system clearly allows too many police to abuse their authority. The problem might be worse than that and run deeper than most of us realize. But even when matters are given the most positive spin possible, the way things are is clearly unacceptable.

News reports suggest that things are indeed worse than most people have been willing to admit. The actions of police in response to protests about George Floyd’s murder have shown aggression and violence in ways that the police are not supposed to, and do not do when present at all protests. Clearly the nature of the protest, and the color of the skin of the majority of protesters, makes a difference. And that is nothing new. If we consider slight tweaks to the status quo sufficient, we are part of the problem. More radical change is clearly needed.

Another Facebook friend wrote, “I grew up in conservative environments where the Boston Tea Party was celebrated as an act of freedom out of frustration at tyranny and oppression…” Another posted this: 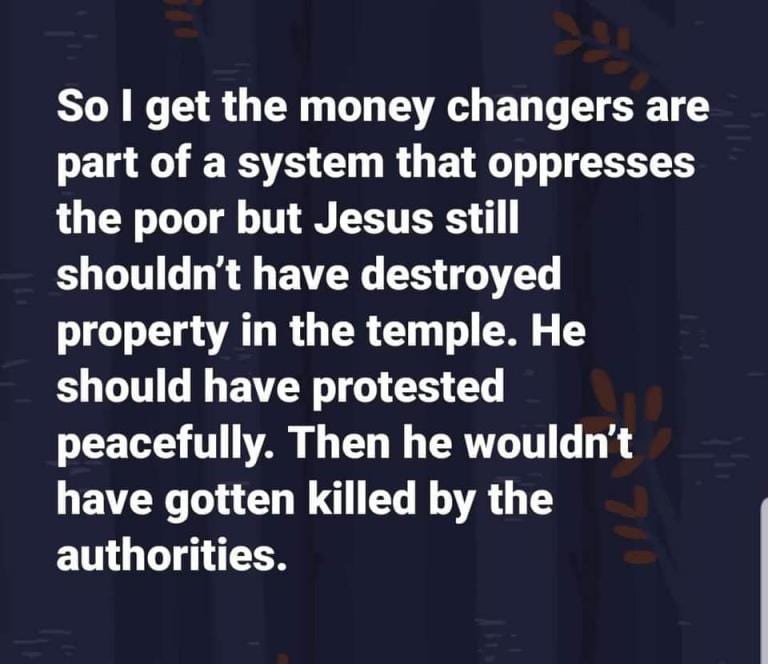 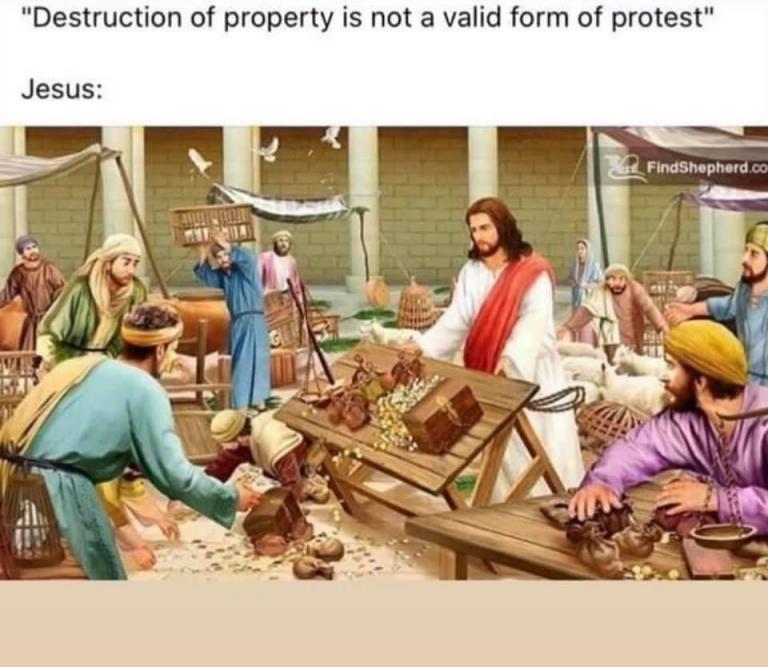 I don’t disagree that it is counterproductive to destroy property in one’s own community when expressing anger about yet another murder by a police officer, someone who is supposed to be preventing murder. But when human beings feel they have no other way to express our anger and frustration, we are prone to lash out even if it hurts ourselves and those closest to us rather than those whom we are angry at.

More importantly, the truth is that the vast majority of protesters are not instigating or carrying out violence, nor looting, nor setting fires. Some protest organizers have actively tried to stop looters. Those who are doing these things in most if not all instances may be criminals taking advantage of the protests for their own purposes. There is also the disturbing evidence of white people engaging in acts of vandalism in conjunction with the protests. Whether these are predominantly out of state white supremicists seeking to discredit BLM by hijacking peaceful protests, misguided supporters, or a mixture of both is hard to say.

But clearly some people are genuinely so angry that they are taking it out on property around them. The appropriate response from white Americans, in my opinion, is to repent of not having addressed the underlying issues of racism and abusive policing before things reached this point. 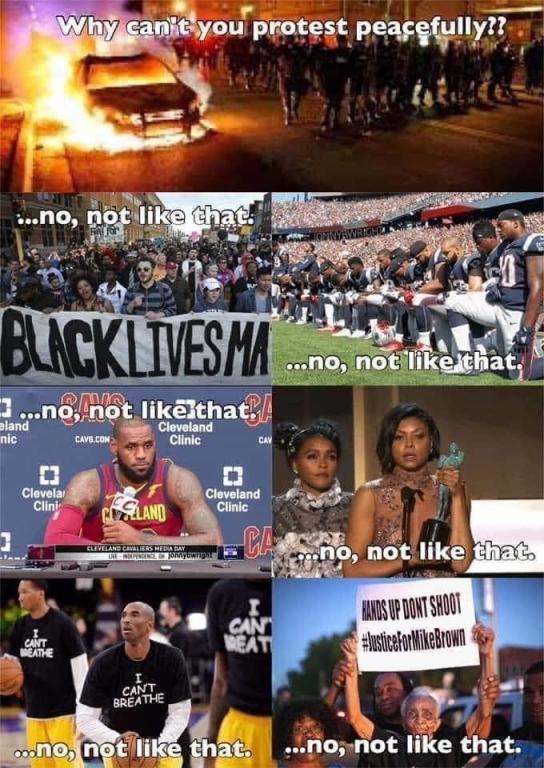 I had the idea for a cartoon which, if I had the artistic ability, I would have drawn. The idea was to depict Lady Justice, face down on the ground, with a police officer kneeling on her kneck as she gasps, “I can’t breathe…” I mentioned it to a cartoonist I know and learned there had already been a couple of cartoons along those lines. I share them here: 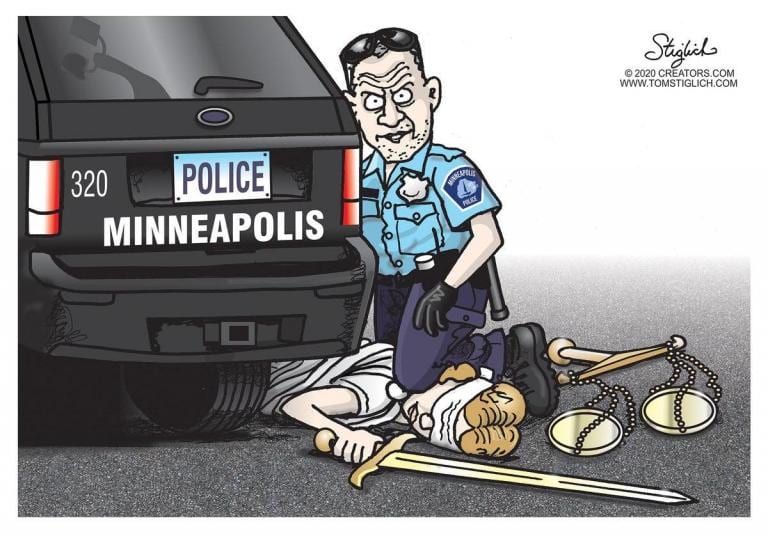 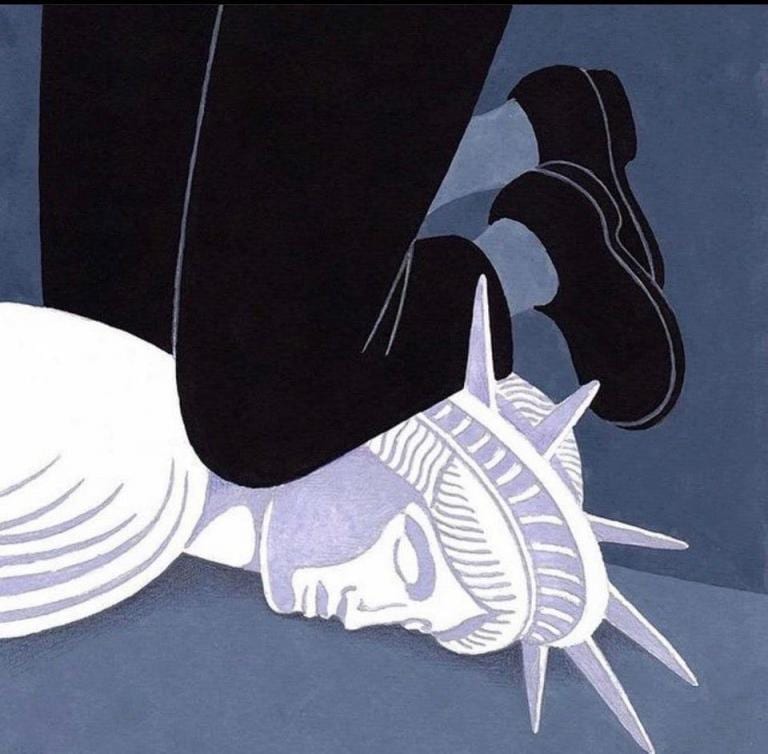 I am glad someone made what I could not. I share the above within something in my own natural medium, that of the wholly inadequate blog post.

I conclude by expressing my hope that if enough people were to take 8 minutes and 46 seconds to really appreciate the way the life was squeezed out of George Floyd, to imagine that being done to them or to someone they love, to place themselves in his shoes, perhaps at long last there will be sufficient outrage that we might at long last see collective action result that produces lasting change.

If you cannot empathize enough to put yourself or a loved one in his place for that length of time, then let me suggest an alternative activity, albeit one no less time consuming. Put yourself in the place of the police officer who did this, Derek Chauvin. Imagine yourself putting your knee on someone else’s neck. Imaging yourself keeping it there while he pleads for mercy, saying he cannot breathe, for this length of time. Imagine yourself keeping it there for minutes even after your victim has ceased to be responsive. Don’t just imagine how long this must be. Time yourself imagining it. Experience what 8 minutes and 46 seconds of acting in this way means. Then see if you can still claim that this was something other than murder, cold callous disregard for the value of the life of another human being. See if you can still be more shocked by the expressions of outrange and anger than by the act that has sparked those reactions.

One way or another, I dare to hope that experiencing what 8 minutes and 46 seconds means, just how long it is, will move you to act for justice from now on in ways you may not have thus far.

It’s not about George Floyd…

When the Social Order Has Legitimacy – Or Not

In some cities police have joined protesters against police brutality

May 31, 2020
The Latest on the Historical Jesus and the Gospels
Next Post 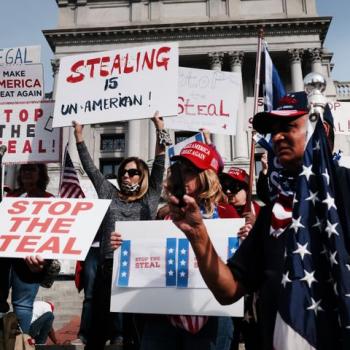