I did not plan it to reach its finale in precisely this manner, when I began blogging the entire classic series. I started two parallel sets of postings mainly because I was listening to many very early episodes in the car as audiobooks, since they do not exist any longer in their original aired form in their entirety but the audio track does and has been turned into audiobooks with added narration to describe on-screen events that cannot be heard. Thus I began watching and blogging about Peter Davison episodes at the same time since he was my very first Doctor, whose second episode “Four to Doomsday” provided my first glimpse of the series ever. Who would have guessed then where it would lead, that watching TV while on a family vacation would connect me to a show I would still enjoy, engage with, and benefit from watching decades later?

As a result, this blogging endeavor concludes at the end of the Tom Baker era with what I think may be the episode that I have seen most often of any, “Logopolis,” his last. This episode has so many cool elements to it. The cloister bell in the TARDIS warning of danger. The mysterious Watcher glimpsed at a distance. The introduction of Australian companion Tegan.

In the episode, the Master adopts the form of a police box for his TARDIS and materializes his around an actual police box. The Doctor wants to go to Logopolis to fix the chameleon circuit and materializes around the Master’s TARDIS. One TARDIS being inside another TARDIS results in a regression as the Doctor finds his own TARDIS within itself!

The name of the place “Logopolis” is striking. It is the name of the planet, and yet the ending of the name means “city.” Of course, in science fiction, an entire planet may be one city (as in the case of Coruscant in the Star Wars galaxy). It is a world of mathematicians, who are capable of creating solid objects through mathematics. They do so not with computers but by word of mouth: they mutter, intone, in a manner that resembles religious chanting. There is a fascinating intersection of the religious and scientific in this. The Monitor (the leader of the Logopolitans) says about it, “Block transfer computation is a complex discipline, way beyond the capabilities of simple machines. It requires all the subtleties of the living mind.”

When the Doctor realizes what the Master is up to, he confesses that he was vain enough to think it was him he was after. The Master is after the power the Logopolitans have. He wants to take over, and so silences them, interfering with their work. That is when the true nature of what the Logopolitans do most of the time is revealed. The universe had already passed the point of total collapse if left to follow the natural course of things. The Logopolitans delayed it with their calculations. They opened the universe and delayed its collapse. Now that work has been interrupted and entropy will take over quickly unless something can be done. The Doctor will take a program the MOnitor provides him with and broadcast it from elsewhere in an effort to save the universe. Adric asks the Doctor why he thinks the program will work. His response is striking: “It’s a sort of vague faith in the nature of things.” He talks about life as a balance between entropy and structure. When Adric says the Doctor is engaging in “woolly thinking,” the Doctor replies that woolly thinking is “very comforting when worn next to the skin.”

When the Doctor tells the Master he envies his TARDIS, the Master says envy is the beginning of all greatness.

The regeneration scene reveals that the Watcher “was the Doctor all along,” as the Doctor says, “It’s the end, but the moment has been prepared for.” That scene is one of the most powerful regeneration sequences both for how it is done but also the drama leading up to the Doctor’s death. There are (for fans) fascinating connections between the Watcher and an idea introduced in the Jon Pertwee era in Planet of the Spiders (and thus bookending the Tom Baker era). I blogged about that episode way back in 2014…

Doctor Who: Planet of the Spiders

This post brings to a conclusion a project I began almost nine years ago. We’ll see where things go from here. I will definitely compile links to the posts about the classic series in a convenient format, akin to a hyperlinked table of contents. I may also turn the whole thing, with some editing, into an ebook for those who might like to have it in that format as a handy reference guide to religion over the long history of the series.

Doctor Who: Starting Again From The Beginning 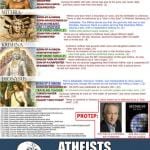 September 17, 2020 #CFP Video Games and Religion
Recent Comments
0 | Leave a Comment
"People have wondered for centuries what made Jesus such a trusting figure, what made people ..."
Greater Dog Jesus according to AI
"I still remember a sermon when the preacher sympathised with Thomas because he is forever ..."
Scurra QAnonsense
"I have, and thanks to your comment and a group discussion on Facebook I am ..."
James F. McGrath ChristianBooks Q&A: What Jesus Learned from ..."
""Wokeness" is a vague label like "liberal" that doesn't really say or mean anything. Putting ..."
James F. McGrath The Immorality of “Pro Life”
Browse Our Archives
get the latest from
Religion Prof: The Blog of James F. McGrath
Sign up for our newsletter
POPULAR AT PATHEOS Progressive Christian
1