Duel of the Antichrists

It never fails. Anyone can find a way to identify any candidate or political leader as the antichrist. The worrying thing is when it is done during an election season and done in a partisan way, as though only one candidate can be subjected to that treatment but the other not.

I have blogged about Trump as antichrist before, but then I focused on the problems with envisaging a single antichrist, and the irony that those with oversensitive antichrist-detection antennas fail to hear any alarm bells related to him. The use of 666 in the Book of Revelation is a wink and a nod about the Roman emperor whom readers could recognize without that to assist them. Indeed, they wouldn’t figure out the name based on the number without already understanding who was being referred to. There was never an expectation that the number would become the focus as the primary or sole means of identifying the antichrist. So much of the American end times mania puts the cart before the horse.

But for those who insist on the numerological fixation, typically they are Trump supporters who previously identified Obama as the antichrist, and now are sure it is the Biden-Harris ticket. But even on numerological grounds there is a case for identifying Trump as the one. 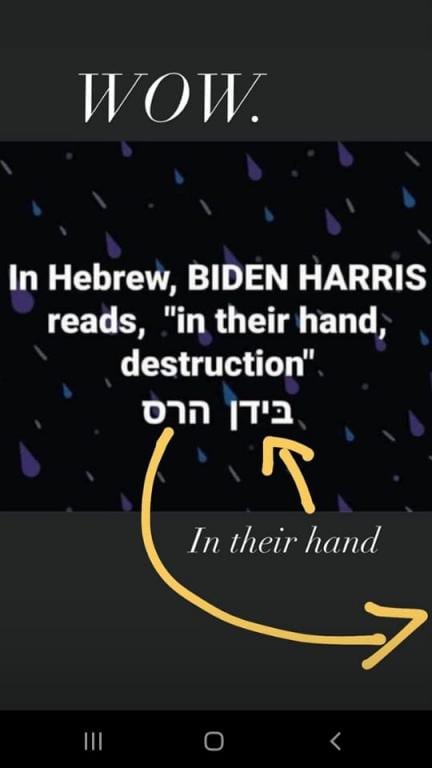 Israelis spell the two names ביידן האריס, but these theories never let such facts get in their way. If you search for these Hebrew words online you find this bogus claim and then a range of other completely unrelated things, because they have nothing to do with Biden-Harris or anything related to antichrist.

My point is not to make the case for one of the above identifications over the other, just to be unambiguously clear. My point is to show that the use of this method to claim someone is the antichrist is infinitely flexible, which is why you should not do it.

In short, don’t not vote for a candidate because of dubious numerological claims and purported Hebrew meanings related to their names. There is more than enough to go on that represents substantive objections to their platforms and their stances. Look at who encourages a blurring of nation and religion into one patriotic idolatry. Look at who panders to religious people for votes while denigrating them in personal conversation. Look at who promises Evangelicals and other conservative Christians what they want and yet is so lacking in character and morality that even so the standard players find themselves unable to support him. Look at whose support comes from people whose faith is shaped by Fox News rather than the life and teaching of Jesus. Look at when those who break ranks from supporting the preferred candidate are forced to resign or otherwise silenced.

You don’t need numerology to identify an antichrist, and if you think you do you have already been deceived…

Both candidates went to church this weekend. Their experiences were very different

Western Michigan pastor resigns over Trumpism in his congregation

New ads from “Not Our Faith”

PRO-life is more than ANTI-abortion

Is Donald Trump “the greatest defender of life, family, and religious liberty to take the White House in decades?

God and the Emperor

Voting for Trump is “Easy,” Says Christian Who Has No Clue What Trump Has Done

Could American Evangelicals Spot the Antichrist? Here Are the Biblical Predictions:

Is Donald Trump the Antichrist?

October 22, 2020
Announcing the Imminent Arrival of Metatron
Next Post

October 24, 2020 More Bible and Music
Recent Comments
0 | Leave a Comment
Browse Our Archives
get the latest from
Religion Prof: The Blog of James F. McGrath
Sign up for our newsletter
POPULAR AT PATHEOS Progressive Christian
1