An Uncomfortable and Awkward Question for Conservative Christian Gingrich Supporters

Are you prepared for America to have a First Lady who was a home wrecker and was once the President’s mistress (if Gingrich were to become President)?  Many Christian conservatives–smitten by Newt’s 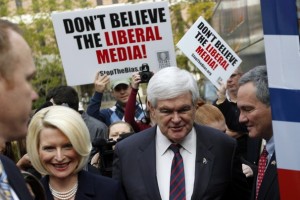 rhetorical flourishes, as they are of any “good preaching”–seem not to have the imagination to entertain this question. It crossed my mind weeks ago, but I thought it churlish to raise it online, until I witnessed Gingrich’s retort to John King when the CNN correspondent brought up the ABC interview with Gingrich’s ex-wife. Here’s the  portion of the exchange I’d like to isolate:

“Every person in here knows personal pain. Every person in here has had someone close to them go through painful things. To take an ex-wife and make it two days before the primary a significant question for a presidential campaign is as close to despicable as anything I can imagine.”

The Speaker is, of course, correct that “every person in here knows personal pain.” No one doubts that. But, in this case, the personal pain suffered by his ex-wife was inflicted by Gingrich. For this reason, the appropriate response for the Speaker should have been something like this, “Every person in here knows personal pain, just like the pain suffered by my ex-wife. And, I am ashamed to admit that I am the one who caused this pain. So, I don’t at all disparage her for what she has said about me. That’s the man I was: self-absorbed, uncaring, thinking myself as someone above the moral law. My conversion to Catholicism, and the absolution I received for my sins, was the first step on my way to becoming the man I ought to be.”

But what we heard from Gingrich was a complaint about his pain, as if he were the victim! But not in relation to his personal virtue and his formation as a Christian, as if King’s question was a stumbling block to his internal sanctification. Rather, Gingrich was upset that the question about his ex-wife was asked in a debate, in his words, “two days before the primary [as] a significant question for a presidential campaign.” This is what he judged “as close to despicable as anything I can imagine.” Either the Speaker lacks imagination or he is so self-absorbed that he instinctively converts his ex-wife’s pain into a question about his personal ambition to become President of the United States. Now, that’s despicable.

So, let me ask it again in a more extended fashion: Are conservative Christians, who believe in the morality of the natural law and all that it entails about marriage, family and civil society, prepared for America to have a First Lady who was a home wrecker and was once the President’s mistress, with her husband as the national standard bearer for the causes of life, conjugal love, and the common good?

January 27, 2012 Honoring my mother-in-law, Peggy Dickerson
Browse Our Archives
get the latest updates from
Return to Rome
and the Patheos
Catholic
Channel
POPULAR AT PATHEOS Catholic
1

Catholic
How Google Makes Us Stupid: The Tyranny of...
Return to Rome
TRENDING AT PATHEOS Catholic