Better to be an adulterer than a Mormon?: Evangelicals, Gingrich, and Romney

Better to be an adulterer than a Mormon?: Evangelicals, Gingrich, and Romney January 18, 2012 Francis J. Beckwith

(Update: You may be interested in the January 20, 2012 follow-up post–Gingrich, Romney, and Evangelicals Follow-Up–in which I respond to a critique of the entry below)

On October 12-15, I had an amazing visit to Utah. I conducted a faculty workshop at Brigham Young University on abortion and personhood, and then gave a talk on my return to the Catholic Church. Both events were attended by faculty members from both the School of Law and the School of Religion. I also conducted a workshop in Salt Lake City for the LDS Public Affairs Office on the topic of Catholic Social 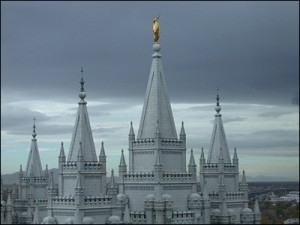 Thought.  It was the first time I had visited BYU since 1992. My hosts–at both BYU and Salt Lake–were delightful. I had a wonderful time.

During the drive from Salt Lake to Provo after I had conducted my workshop on Catholic Social Thought, my friend and host, Robert Millet (an LDS Professor at BYU), shared with me a story that I will not easily forget. He told me of a Mormon friend who in conversation with an Evangelical Protestant had asked him whether a Christian who committed adultery would lose his salvation.  The Evangelical answered, “No.” The Mormon followed up with this query, “What if the Christian had murdered someone? Would he then lose his salvation?” The answer, again, was “no.” Then the Mormon asked, “Well, what if he had become a Mormon?” The Evangelical answered, “That’s a good question. I don’t know.” I joked with Bob, “Perhaps your friend should have asked what would be the state of the person’s salvation if he had murdered, or committed adultery with, a Mormon?”

Having spent over two decades of my professional life in the Evangelical world, the answers to this Mormon gentleman’s queries do not surprise me, though they, of course, shocked Bob, as it did the friend who had told Bob of the encounter. For the implication for this Mormon gentleman was clear: Evangelicals believe it is better to be a murderer or an adulterer than to be a Mormon.  I am, of course, not suggesting that Evangelicals are thoughtless bigots, or even that most Evangelicals share this gentleman’s lack of theological nuance and judgment. Far from it. If anything, I am convinced that his answers are borne of a deep commitment to theological truth, something that one rarely finds in a culture in which theological claims are treated as no epistemically higher than matters of taste. In this sense, his willingness to stand against the spirit of the age is admirable. But in another sense–tying a believer’s eternal fate to overt cognitive assent to a set of doctrines without regard to whether in fact the believer’s life reflects Christian virtue–seems not very Christian at all. It, ironically, reflects an acquiescence to the flip side of the spirit of the age: it treats the human person as a bifurcated being consisting of an all-important mind that consents to doctrine and an unimportant body that is alien to the “true” self.

This is why I am not at all surprised–as my fellow Patheos blogger, David French, reports–that a group of Evangelical leaders who met privately to discuss which presidential candidate to endorse did not even consider Mitt Romney. Apparently it was a contest exclusively between Newt Gingrich and Rick Santorum, with the former Pennsylvania Senator receiving the nod with an 85-29 vote. Amazingly, Gingrich was in the running, despite the former Speaker’s propensity to engage in questionable conduct when in the pursuit of political power. It seems, then, that a Mormon Newt without the history of moral foibles occasioned by political ambition would have received the same lack of consideration these Evangelical leaders gave Governor Romney.  Consequently, the message that our Mormon friends will hear from this is the same one heard by Bob Millet’s friend: better to be an adulterer than a Mormon.

In light of this, Evangelicals–indeed, all Christians, including Catholics, that connect their theological paternity to the Council of Nicea–have to reassess how their public actions and official statements communicate what they believe about statecraft and the moral qualifications for political leadership to a world already skeptical of their motives and their judgment.

(Update: You may be interested in the January 20, 2012 follow-up post–Gingrich, Romney, and Evangelicals Follow-Up–in which I respond to a critique of this entry)

January 19, 2012 My critique of Roe v. Wade and its progeny
Browse Our Archives
get the latest updates from
Return to Rome
and the Patheos
Catholic
Channel
POPULAR AT PATHEOS Catholic
1