A post of mine from yesterday–Better to be an adulterer than a Mormon?: Evangelicals, Gingrich, and Romney–garnered the most hits in the history of this blog. In response to this entry, my dear friend Michael 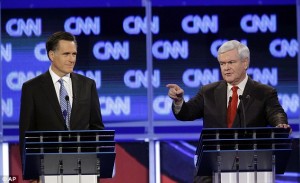 Bauman writes in the combox:

All other things being equal, it’s better to be a forgiven Catholic — Gingrich, than a forgiven Mormon — Romney, especially when the Catholic is better informed, more experienced, more articulate, and has a better record of legislative achievement (not to mention that Catholicism is truer than Mormonism and therefore yields more benefits and advantages of many sorts.)

God forgives and God regenerates repentant sinners. Unless we are prepared to say, and to substantiate, either that conversion is not real or that Gingrich is not converted, then I will continue to assert the authenticity of his change. I’ve seen nothing that makes me think it is not true. If anyone else has seen such contrary evidence, I’d be quite willing to listen and possibly to change my assessment. Gingrich seems to me a new and different man morally and spiritually from what he was. Given the truth of Christianity and the power of God in the gospel, it’s exactly what I’d expect. He has confessed, repented, and been absolved. I, therefore, will not continue to throw his errors in his face. He has acknowledged them repeatedly and publicly. Those allegations that are false he has denied.

Good on him, and God bless him.

I do not disagree with Mike that Newt Gingrich has undergone a true conversion. That was not the issue I was addressing in my entry. What I was addressing was the wisdom and political judgment of those Evangelical leaders who seemed to have not even considered Mitt Romney, even though Romney’s life story does not suggest a person whose character  lacks the fortitude to withstand the sorts of temptations that seem to have bedeviled Gingrich throughout his career. Adultery, of course, is one temptation. And I highly doubt that Gingrich would succumb to that temptation ever again. But the cluster of character traits that gave rise to these infidelities is a different story all together. As I said in a December 3, 2011 Catholic Thing essay on Gingrich:

In 2009, Gingrich was received into the Catholic Church, the faith of his third wife, Callista Bisek. Because Catholic conversion requires the sacrament of confession, Gingrich has been absolved of his sins. This, of course, suggests to many, including me, that one cannot evaluate Gingrich’s candidacy and character without taking his conversion seriously. It is a mistake for Christians to emulate the world and treat a man’s conversion as if it were the metaphysical equivalent of a change in hobby.

This is not to diminish or call into question Gingrich’s conversion. Quite the opposite. For, as the Catholic Catechism teaches, absolution of sins does not eradicate all the effects and consequences of those sins on the shaping of one’s character. This requires ongoing conversion, including detaching oneself from those things that may provide an occasion for sin.

It seems to me that a man whose sins arose as a consequence of the pursuit of political power and the unwise use of it after he became Speaker of the House should not be seeking the most powerful office in the world.

Newt Gingrich, to be sure, changed my life, and I am grateful for that. But it is far more important that Gingrich’s new life change his soul, and for this reason, I will not support him in the Republican primary.

Does anyone seriously believe–given his reckless comments about Romney and Bain Capital–that Gingrich has truly detached himself from those things that may provide an occasion for sin?  As conservative Washington Post blogger Jennifer Rubin puts it: “The `King of Bain’ ad is a microcosm of Newt Gingrich. The ad embodies the same contempt for truth and the same political maliciousness that has characterized much of Gingrich’s career and now consumes him.” And what about his grandiose sense of his own historical importance? What follows is a document released this morning by the Romney Campaign. Am I the only one who does not find this bombastic narcissism terribly unsettling? (Notice that the post- and pre-conversion comments are nearly indistinguishable)

A Selection Of Speaker Gingrich’s Thoughts Over The Years

Speaker Gingrich Has Compared Himself to a Litany of Historical Leaders:

Ronald Reagan And Margaret Thatcher: “Gingrich said he learned a lot about himself in the political wilderness. … In the same breath, he compares himself to two conservative giants. With Gingrich, humility has its limits. ‘Because I am much like Reagan and Margaret Thatcher, I’m such an unconventional political figure that you really need to design a unique campaign that fits the way I operate and what I’m trying to do.’” (Jim Acosta, “Newt Gingrich Back From The Brink,” CNN.com, 11/16/11)

Abraham Lincoln: “Gingrich began his speech with remarks in which he predicted an economic recovery ‘literally’ the night Republicans would send Barack Obama home, and then announced, ‘I begin as Lincoln did.’ He argued that, like Lincoln, all his ideas came out of the Declaration of Independence.” (Jason Horowitz, “Newt Gingrich Draws Contrast With Romney,” The Washington Post, 12/1/11)

Woodrow Wilson: “He earned a PhD in history and taught college before winning a seat in Congress. He has often spoken of himself as a historian. In 1995, he told CNN’s Bob Franken: ‘I am the most seriously professorial politician since Woodrow Wilson.’” (John Pitney, “Five Myths About Newt Gingrich,” The Washington Post, 11/22/11)

Henry Clay: “Putting his tumultuous four years in the speaker’s chair into historical perspective, the former history professor compared himself to 19th century statesman Henry Clay, ‘the great compromiser’ who lost three bids for the presidency and served as speaker and secretary of State. Gingrich said that like Clay, he did more than just preside over the House. ‘I was not a presider, I was the leader,’ Gingrich said in the interview. ‘I think Henry Clay’s probably the only other speaker to have been a national leader and a speaker of the House simultaneously.’” (William Welch, “Gingrich: I’ll Go Down As Leader, Clinton As Tragedy,” USA Today, 8/30/99)

Charles De Gaulle: “‘At one point, I asked Gingrich, now a healthful-looking 65, about his sudden exit from Congress in 1998. ‘First of all, in the Toynbeean sense, I believe in departure and return,’ he told me. ‘In the what sense?’ I asked. ‘Arnold Toynbee,’ he replied matter-of-factly, referring to the English writer Arnold J. Toynbee, who wrote ‘A Study of History.’ ‘I believe in the sense that, you know, De Gaulle had to go to Colombey-les-Deux-Églises for 11 years.’ ‘I’m sorry?’ ‘Departure and return. And someone once said to me, if you don’t leave, you can’t come back, because you’ve never left.’” (Matt Bai, “Newt. Again.” New York Times Magazine, 2/25/09)

William Wallace: “‘If you go out and see what’s happening in the Tea Party, the last thing you want is a passionless election,’ Gingrich says, then refers to the epic movie about the battle for Scottish independence in the 13th century. ‘Remember Braveheart? These people want somebody who plants a flag in the ground, gives a speech and yells “Charge!” That is, someone like him.” (Susan Page, “Rising From The Pack, Gingrich Invites Scrutiny,” USA Today, 11/21/11)

Pericles: “In a long interview on May 4, 1992, devoted almost exclusively to the topic of Gingrich, [former White House aide Richard] Darman concluded that Gingrich was ‘an unstable personality’ who talks about four or five great people in history, including Pericles and himself.” (Bob Woodward, “In His Debut In Washington’s Power Struggles, Gingrich Threw A Bomb,” The Washington Post, 12/24/11)

The Duke Of Wellington: “Obsessed recently with Arthur Wellesley, the Duke of Wellington, [Gingrich] likened the appropriations triumph to the way the British expeditionary force maneuvered against the French during the Peninsular War, a campaign in Portugal and Spain in the early 1800s that eventually led to Wellington’s ascendance and Napoleon’s abdication.” (Michael Weisskopf and David Maraniss, “In A Moment Of Crisis, The Speaker Persuades,” The Washington Post, 8/13/95)

A Viking: “With his machine-gun staccato delivery, [Gingrich] is the center of attention. He terms himself a ‘Viking.’” (“Gingrich Delivers For GOP Faithful,” South Bend Tribune, 7/28/95)

Thomas Edison: “Once he took over GOPAC in 1986, the organization became what he called the creative thinking and research group of the Republican Party. ‘We are on the way to becoming the Bell Labs of politics,’ Mr. Gingrich proclaimed. ‘That’s the closest model you can find to what we do, and nobody else is in that business. The first thing you need at Bell Labs is a Thomas Edison, and the second thing you need is a real understanding of how you go from scientific theory to a marketable product.’” (Katharine Q. Seelye, “Birth Of A Vision,” The New York Times, 12/3/95)

Vince Lombardi: “By four in the morning, [Gingrich] had moved on to football metaphors. What the Republicans had accomplished, Gingrich said, was like the old Green Bay Packers sweep during the days of Coach Vince Lombardi: The opposition knows you are going to run at them, but they cannot stop you. Lombardi, Gingrich said, believed that the team that doesn’t break in the fourth quarter wins.” (Michael Weisskopf and David Maraniss, “In A Moment Of Crisis, The Speaker Persuades,” The Washington Post, 8/13/95)

The Wright Brothers: “At that dinner, held in a convention center in Johnston, Gingrich sought to add more emotional lift into his stump speech. ‘I am asking you to embark with me on a voyage of invention and discovery,’ he said, ‘to be as bold and as brave as the Wright brothers.’” (Jason Horowitz, “Newt Gingrich Draws Contrast With Romney,” The Washington Post, 12/1/11)

Moses: “On this night, Gingrich congratulated his troops on standing united and inspired them with stories about Charles de Gaulle’s heroism and George Washington at Valley Forge … At one point, he likened himself, lightheartedly, to Moses. He’d help them cross the Red Sea once again, Gingrich vowed, but only if they promised, this time, to stay on the other side.” (Matt Bai, “Newt. Again.” New York Times Magazine, 2/25/09)

January 20, 2012
Honoring My Father and Mother on their 52nd Anniversary
Next Post

January 23, 2012 An Uncomfortable and Awkward Question for Conservative Christian Gingrich Supporters
Browse Our Archives
Related posts from Return to Rome