Church, State, and the Abuse Crisis: The Role of Assumed Ideas of “Reasonableness” in Religious Liberty

Church, State, and the Abuse Crisis: The Role of Assumed Ideas of “Reasonableness” in Religious Liberty December 7, 2020 Francis J. Beckwith

The title of this blog post is the title of an article I just published in the most recent issue of the Journal of Christian Legal Thought 10.2 (2020): 21-28.  An earlier version of the piece was delivered in New York City as a paper as part of the panel, “Church–State Relations in a Time of Scandal,” sponsored by The Morningside Institute (Sept. 26, 2019). 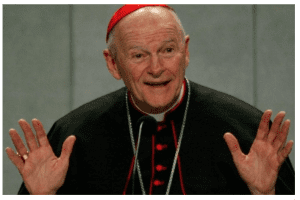 In this essay I look at the abuse crisis in the American Catholic Church through the lens of the often complex and uneasy relationship between Catholicism and American culture and politics. I will also take us on a brief excursion into Supreme Court jurisprudence and explain why appeals to religious liberty by themselves are ultimately ineffectual in providing a safe harbor for the Church. What I hope to show is that the long-time—and in some cases, continued—reluctance on the part of segments of the American church to aggressively root out and prosecute this wickedness has the potential to provide justification to some of the most deep-rooted and pernicious prejudices about the Church and its place in a liberal democracy

When I submitted the article earlier this year I had no idea that its publication would occur almost simultaneously with the release of the McCarrick Report. Here’s an excerpt from the article’s conclusion:

For those of us who are Catholic, the first two decades of the twenty-first century have felt like one long Lent. We have been made painfully aware of the seemingly endless stories of clergy sexual abuse, whose villains are sometimes protected by those at the highest levels of the Church. I confess that these relentless revelations—including the ones pried from the Boston Archdiocese, attested to by the victims of Cardinal McCarrick, recorded in the 2018 Pennsylvania grand jury report, culled from the research of the late A. W. Richard Sipe, and disclosed in the August 2018 letter authored by Archbishop Carlo Maria Vigano*—are not conducive to habituating charity toward those who claim to be the apostles’ successors. [See note below]

Nevertheless, many of us know, from both our knowledge of the great saints in the Church’s history, as well as our encounters with many dear souls in the present, that the barque of Peter has always been and continues to be a place in which true sanctity, love, and devotion flourishes overabundantly. Although we take comfort in this knowledge—occasionally summoning those pillars of grace through memory and prayer—we also know that what people outside the Church believe about her, and the extent to which her ecclesial liberty should be accommodated, is shaped significantly not only by salacious news reports but also by some of the prejudices and philosophical assumptions we covered in this essay. [All footnotes from original, except one, omitted]

The issue of JCLT in which my article appears includes articles by such notables as John Witte, Jr. (Emory School of Law), Timothy Samuel Shah (Baylor and the Religious Freedom Institute), and Daniel Philpott (University of Notre Dame). You can read the entirety of the journal including my article here.

*Note: I am not suggesting, by citing these sources, that one should not critically assess them. For example, the accuracy of Archbishop Vigano’s August 2018 letter and the subsequent ones he has penned, as well as his motivations for writing them, have come under withering critiques. See, e.g., Cindy Wooden, “Cardinal Ouellet issues response to Archbishop Vigano on McCarrick case,” Chicago Catholic (Oct. 7, 2018)

November 29, 2020
How Google Makes Us Stupid: The Tyranny of Presentism
Next Post

December 13, 2020 Judith Jarvis Thomson (1929-2020)
Browse Our Archives
get the latest from
Return to Rome
Sign up for our newsletter
POPULAR AT PATHEOS Catholic
1

Cancel And Replace The March For...
A Little Bit of Nothing
Related posts from Return to Rome