Infighting Is Destroying the Church

Infighting Is Destroying the Church May 21, 2014 Brandan Robertson

I suppose it’s a normal thing for brothers and sisters to get in arguments. When you spend so much time together, you’re bound to get on each 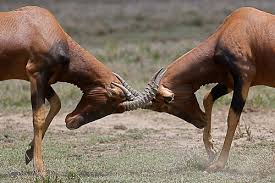 others nerves. You’re bound to see things differently. You’re bound to step on each others toes once in a while. That’s healthy. It’s normal. It’s part of being a family. And yet every time you get in an argument, you’re forced to work through it. To compromise. To move one. To forgive. Because you’re family and you aren’t going anywhere.

But when brothers and sisters never stop fighting, when they start pushing each other out of the family and refuse to talk to, but only about, one another. When they start publicly defaming each other. When we leverage the lives of others in our family to force our sibling to do what we want. Then we have some major problems. That family needs some counseling, ASAP. Because you simply cannot function as a family unit when such division and detestation exists. It’s utterly poisonous. If it’s left to grow, the family is going to digress into nothing more than an episode of the Jerry Springer Show.

We all know this is true. And yet the family of western Christians today has moved into a similar position as the severely dysfunctional family. In fact, it seems like every week the Church airs to the world a new example of our Jerry Springer Show like dysfunction. Over the last month or so, the Church has slugged it out over issues of gay marriage, starving children, Hollywood films, generational divides, abusive pastors, and about 500 other issues. Some of the issues were petty, others profoundly important. Some, matters of life and death.

Our infighting as the people of Jesus is not only inconsistent with the character of the Rabbi we claim to follow, but it is the very thing that is causing thousands of people to walk away from the faith feeling deeply wounded and angered by the hopelessness that the people of Jesus have consistently displayed to the world.

Whenever an individual, denomination, or organization takes a view or action whether theologically, politically, or socially that we may not agree with, we seem to have the tendency to jump on our warships and launch a full scale attack. We feel some innate need to dismantle and destroy the other person or organization as if it were the most destructive of enemies. We justify ourselves by saying that we are defending truth or upholding justice, when in reality, we’re just acting out of some deep hurt and fear. Fear that the other person may be right. Fear that maybe we have been wrong. Fear that God is looking down from heaven and waiting for our own foot to slip and fall into false teaching or action that will bring our swift damnation. Fear that maybe we’re not in control and everything isn’t as clear as it once seemed.

I am firmly convinced that all of our infighting is rooted in fear. The evangelical response to the World Vision controversy was rooted in fear. The responses surrounding Matthew Vines new book were rooted in fear. The forcing out of reformed pastor Tullian Tchvidjian from the Gospel Coalition Blog is rooted in fear. It is that fear that furthers the mindset that the one with whom we disagree is our mortal enemy. It is fear that pushes each of us further into our corner of the boxing ring and roots us deeper in our own narrow position. Fear closes our minds and our hearts. It creates in us hostility. And fear, if left to germinate, will eventually split the Church once again as it did in the 1500’s. It will cause our fights to become bloodier and more and more costly. And for many, it may bring an end to their journey of faith.

I cannot speak for all Christians, but I am convinced that many of us are afraid. And it is precisely that fear that continues to drive these controversies, that continues to fuel our anger and spirit of division. When we just have to “call out” the group that we disagree with, were acting in fear. No matter how legitimately wrong they may be, slander, public criticism, and defamation are never the healthy way to go. It never accomplishes the desired results. It only creates more hurt, more anger, more fear, and deepens our wounds. It creates bigger monsters. It demolishes any bridges that were being built and any hope for reconciliation.

The power of the Gospel of Jesus is that it utterly destroys fear. If death itself is defeated and the powers of evil in our world are overcome by God’s mercy, what is there left to fear? If the God who was revealed in Jesus is truly the Lord of all, then nothing should cause us to be afraid. Love is reigning. And love casts out all fear. Love stands in the face of injustice and sin and with patience and grace subverts and overcomes it. Love does not launch torpedoes at evil and destroy it. Love responds to injustice and evil with self-sacrifice and demonstration of a better way.

Instead of criticizing the other, Love simply demonstrates the better way with much patience and grace, and it is the power of that demonstration that will win over even our staunchest opposition. Love recognizes that people are not the problem. But fear. Darkness. Injustice. These are the forces with which we are in conflict. And the victory can only be won through bravery, grace, and incarnated truth. The way to change the “other” is through following the pattern of Jesus: breaking oneself, pouring oneself out for the redemption of the world. This is the only way to create lasting change. To heal the deepest wounds. To expel the most profound fear. It sounds too good to be true. I know. It sounds too ideal. It sounds contrary to everything that the world tells us. That’s why it’s called the straight and narrow way. That’s why there are few that find it. The broad way, the way of fear, criticism, and violence. That’s the way that the crowd goes on. And Jesus assures us that it leads to destruction. We will destroy ourselves if we continue down that road.

I am not sure there is a practical application I can offer. I write as much to myself as I do to anyone else. The only hope I think we have as the Church is to take time to stop and gaze deeply at the cross of Jesus once again. To see the way Jesus, Love incarnate, responds to injustice, abuse, pain, and fear. If we take time daily to contemplate that Divine mystery that defies all human wisdom and instinct and we allow it to transform our minds and hearts, especially in the way we regard those whom we most harshly disagree with, I think we may begin to discover once again the road that leads to life. To lasting change. To redemption.

“There are two basic motivating forces: fear and love. When we are afraid, we pull back from life. When we are in love, we open to all that life has to offer with passion, excitement, and acceptance…Evolution and all hopes for a better world rest in the fearlessness and open-hearted vision of people who embrace life.” – John Lennon

This article was originally posted on Red Letter Christians on April 12, 2014

May 20, 2014
The Newest "Threat" to Evangelicalism? Matthew Vines
Next Post