Banned By Evangelical Book Sellers: How My Support for Marriage Equality Cost Me A Book Contract

Yesterday a piece went live on TIME.com that reported news that I had lost my book contract of over a year due to my 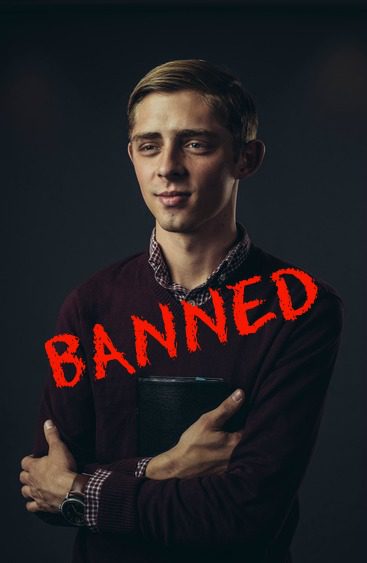 theological position on same-sex relationships and my identification with the LGBTQ community. The story at TIME is fair and accurate, I want to take a few moments to elaborate a bit more on my current situation.

When I received the news that my contract would likely be terminated last week, I was honestly shocked. My former publisher, Destiny Image, signed me in March 2014 to be one of the first in their new “progressive” line of books along with books by my friend Benjamin L. Corey (who blogs at Patheos Progressive). As a then 21 year old senior in college, I was excited at the opportunity to turn so many of the thoughts that I had been sharing through my blog Revangelical into a book, a dream that I have had since I was a child. My book was to be a collection of memoir-essays that outlined some of the most important lessons that I have learned over the course of my spiritual journey thus far. I would be raw and honest, but also seek to write from an evangelical perspective to evangelicals. In order to do that, I intentionally kept out a chapter on sexuality, hoping to not detract from the broader message I was trying to communicate.

Last March I began working on writing the manuscript, pouring my heart and soul on the pages of this book. It was perhaps the hardest thing that I have ever done and caused me to wrestle with areas of my own life and faith that I had buried deep within my soul. After spending nearly a year writing this 45,000-word manuscript, I finally completed my first draft two weeks ago. When I finally was able to turn in the completed manuscript of Nomad, I breathed a deep sigh of relief. Nearly a year of hard work had finally paid off. I was done. Or so I thought.

Within a few hours, I received an email from my publisher asking if we could have a conversation via phone later that day about some “concerns” that had arisen from book buyers. As soon as I read those words, a knot formed in my stomach. My heart began to race. I have received emails like this before from leaders at my Bible College and churches I had been a part of. I immediately knew that the problem was going to be with my support of LGBTQ equality and inclusion in the Church. I quickly responded to the email and was on the phone with my publisher within the hour.

Unfortunately, I was right.

My publisher explained that in recent weeks as they had tried to sell my book to a number of Christian distributors and had been informed that because of my advocacy of and identification with the LGBTQ Christian community, they had refused to buy my book (which, once again, has absolutely nothing to do with the topic of sexuality) Because the Christian Bookstores are the main buyer for Destiny Image, my publisher informed me that it was likely that they were going to have to drop my book. I acknowledged the difficult position my publisher was in and graciously hung up the phone. Immediately, my head fell on to my desk and tears flowed down my face. I felt a mixture of anger and sadness wash over me. Not because my book got cut, though that was disappointing enough. I was crying because this feeling of marginalization and rejection by my Evangelical community has begun to feel all too familiar. Time and time again, I have found myself sitting across the table from Evangelical mentors, leaders, and friends as they have explained that because of my perspectives on this singular issue, I was no longer a part of the Evangelical fold. That I could no longer be a part of my community, or school, or network, because I believed that God blesses same-sex relationships. And here again I sat, being told that because of my sexual identity and support for equality, Christian booksellers were banning me from publishing. Last week, I received the phone call that I knew would be coming. My publisher officially informed me that my manuscript was going to be released back to me and my contract voided because they were unable to sell my book to their major Christian buyers.

After having nearly a week to process my publisher’s decision, I find myself today feeling more heart broken than ever at the state of Evangelical Christianity. Not because I lost a book deal, but rather because of the broader reality that this situation points to. The marginalization and discrimination I taste today is only a sliver of what LGBTQ people face every day at the hands of Christians. Every day, LGBTQ individuals are told that they are no longer welcome in churches, are kicked out of homes, are fired from jobs, and are forced in to reparative therapy by those who claim to represent Jesus. Every day, more and more people are pushed away from the God who loves them by Evangelical ministers who value theological correctness more than the human beings standing right before their eyes.

Many have said it before, but it bears repeating here. There is a major problem within Evangelical Christianity. And that problem is that many leaders within Evangelicalism have decided that the Gospel is not truly good news for everyone. For LGBTQ people, the Gospel is not that you are loved, forgiven, and accepted just as you are. Instead, the message is “get straight”, be celibate, or be damned. For LGBTQ allies, the Gospel isn’t about grace; it’s about theological conformity. If you disagree on this one issue, the unforgivable sin, you are literally banned. From church, from school, from publishing, from heaven. This is the “gospel” that is being preached. And it is a false gospel.

I don’t know what the coming days hold. It is my hope that my book will find a new home at another publishing house. But more than that, I hope that God will continue to work to radically uproot and reform his Church on this issue. For me personally, this situation has stoked the flames of passion within me to continue working hard to change the hearts and minds of Evangelical Christians on the topic of LGBTQ inclusion and equality. This situation has stoked my passion for preaching again the true Gospel of Jesus Christ, the Gospel that proclaims that the Kingdom of Heaven is in our midst and invites all people to join in it’s expansion. The Gospel that calls everyone without exception to the beautiful banquet table of our God. I am more committed than ever to giving my life to preach that Gospel. Because that’s truly good news.