To The Point: The Facts About Indiana’s RFRA 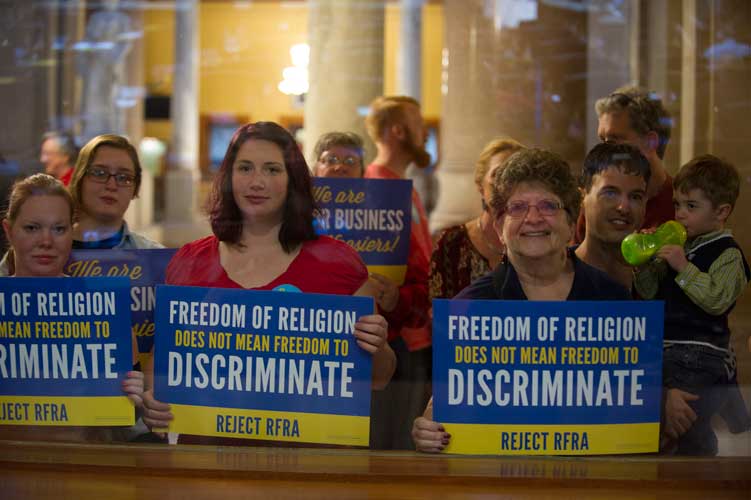 experienced political analyst. There is a constant back and forth between opponents and proponents of the bill claiming that the RFRA in Indiana will/will not open the door for anyone to discriminate against LGBTQ people on the basis of their “religious convictions”.

If you were to read the actual bill that was passed in Indiana, you’d probably walk away with even more confusion. But when it comes down to the bear basics, what’s the truth here.

What does Indiana’s RFRA actually do?

I’ll do my best to distill all of the information and opinions floating around out there into a few, clear points.

To start off, we should ask: does Indiana’s RFRA actually legislate discrimination of LGBTQ people?

No, it doesn’t. At least, not explicitly in the bill itself. Indiana’s RFRA does however provide a legal defense for individuals and businesses (which are defined as “persons” in the RFRA) to deny service (i.e. discriminate) to any LGBTQ person based on “substantial burden” on their “religious convictions.” Here’s what the RFRA actually says:

On businesses being defined as “Persons”:

“As used in this chapter, “person” includes the following: (1) An individual. (2) An organization, a religious society, a church, a body of communicants, or a group organized and operated primarily for religious purposes. (3) A partnership, a limited liability company, a corporation, a company, a firm, a society, a joint-stock company, an unincorporated association, or another entity that: (A) may sue and be sued; and (B) exercises practices that are compelled or limited by a system of religious belief held by: (i) an individual; or (ii) the individuals; who have control and substantial ownership of the entity, regardless of whether the entity is organized and operated for profit or nonprofit purposes.”

In other words, a business is able to defend itself against discrimination charges by appealing to “religious beliefs”, whether or not the business is a “religious” organization.

On being substantially burdened:

In other words, if any business owner feels that providing a for-profit service to any person that they disagree with is a “substantial burden” to their “religious beliefs”, they may appeal to and be protected by RFRA.

Now, defenders of RFRA are quick to point out that in the other 19 states, RFRA has never successfully been used in defense of discrimination of LGBTQ people.

And they would be right.

The difference here is that in Indiana, there are no statewide laws that defend LGBTQ people as a “protected class”.

Now, that language is likely to be confusing to some.

A protected class is simply an identifying characteristic of a person that is protected from being grounds for discrimination. Our Federal law protects race, color, religion, gender, national origin and many other aspects of an individual as protected classes, and many states have added sexual orientation to ensure that no one can be discriminated based on their sexuality.

But in Indiana, this is not the case.

In fact, Indiana Governor Mike Pence has explicitly stated that he will not make sexuality a protected class. In an interview with the Indianapolis Star, Gov. Pence said making sexual orientation a protected class was “not on his agenda.”

If sexual orientation and gender identity were listed as protected classes, this would ultimately mean that anyone appealing RFRA to justify not serving an LGBTQ person would face an uphill battle. It would make it increasingly difficult to appeal to religious beliefs as a credible basis for denying service to someone based on their sexual orientation.

In essence, it’d put to bed all of the accusations that the real intention behind RFRA is discrimination.

But the Governor doesn’t seem interested in doing that.

So, in light of these facts, let me again state that though the text of RFRA itself does not talk about LGBTQ people, it seems clear that the agenda of Gov. Pence is to make room for business owners to refuse service to LGBTQ people based on their religious convictions.

If that were not the case, then Gov. Pence would make sexual orientation a protected class.

But he’s made it clear that protecting LGBTQ Hoosiers from discrimination is “not on his agenda” right now.

Then what is on his agenda, we might ask?

March 26, 2015
Be Not Deceived: RFRA Is Not About Religious Liberty
Next Post