Be Not Deceived: RFRA Is Not About Religious Liberty 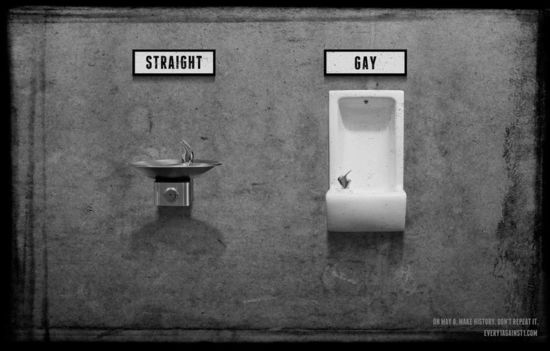 There has been a firestorm in the media over the past 24 hours as Indiana’s House of Representatives passed a bill that exempts individuals and businesses from having to comply with the discrimination rulings based on their religious convocations. At the same time in Georgia, another RFRA (Religious Freedom Restoration Act) has been approved by the House judiciary subcommittee and is rapidly moving towards becoming law. Advocates are promoting both bills as necessary legislation to bolster religious freedom and protect business owners and private citizens from being forced to provide services to anyone that they disagree with on the basis of their faith.

These bills began popping up around the country right as the Supreme Court announced that it would begin hearings on marriage equality which will likely result in the legalization of same-sex marriage at a national level. The logic that has been used by many in support of these bills is this: that when marriage equality becomes law, churches, businesses, and individuals may find themselves being forced to perform weddings, bake wedding cakes, and ultimately endorse same-sex weddings that are opposed to their religious beliefs. Therefore, these RFRA’s are necessary protective pieces of legislation that will offer protections to all those who are opposed to same-sex marriage.

At the surface level, that might sound all well and good. But embedded in this logic are a number of untruths that, when exposed, unravel the entire argument. First, almost every state in the country already has comprehensive and sufficient religious freedom protections. In no state is it viable to suggest that a Christian pastor could face legal action if they refuse to perform a gay wedding. Our first amendment rights alone offer substantial coverage from such actions. However, it is true that in many states, if a business owner refuses to extend their business to a customer on the basis of religious beliefs, they could face legal action for discrimination, as they should.

Since the founding of our country, we have strived to be a nation that upholds the fundamental dignity of every individual. Yet, when a lesbian couple walks in to a bakery to order a cake for their wedding and is turned away because of their sexual orientation, this act of discrimination clearly undermines their equality and dignity as American citizens and human beings. If a business owner believes that Islam is a “false religion”, he could refuse to provide services to any Muslim patron who walks through the door of his business. This too dehumanizes individuals and reinstitutes principles of discrimination and segregation. It is clear that these bills open Pandora’s box, allowing for discrimination to flourish and setting back our country decades in our progression towards equality.

Despite the fearful picture that is being painted by many legislators and religious leaders about the future of our country once marriage equality is passed, this reality remains true: The religious beliefs and convictions of all Americans are fully protected by both national and state law in all 50 states. No individual will ever be forced to promote or renounce a religious belief and no churches will ever be made to offer sacraments to those they deem unfit. It is true, however, that public businesses and corporations that serve the general public will be required to offer fair and equal treatment and service to all people- regardless of their race, creed, political party, religious affiliation, sexual orientation, or gender identity. And it is this that new RFRA bills are subversively trying to dismantle.

Can you imagine walking up to a store window and seeing a sign that says, “No LGBTQ People Allowed”. Would you want to support that retailer? What if it said, “No Jews Allowed”? This is essentially what RFRA’s will allow businesses across their state to do, recreating the climate that existed in our country prior to the Civil Rights Movement. As the great civil rights leader John Lewis once said, “The civil rights movement was based on faith. Many of us who were participants in this movement saw our involvement as an extension of our faith. We saw ourselves doing the work of the Almighty. Segregation and racial discrimination were not in keeping with our faith, so we had to do something.”

So it is for me today. As a person of faith and one who identifies as LGBTQ, I can think of no greater digression for our society than to reinstitute laws that allow for segregation and discrimination. And this is precisely what these so-called “Religious Freedom Restoration Acts” aim to do. So be aware that even though legislators in Indiana and Georgia are claiming to be “bolstering the protection of religious liberty”, they’re really just trying to legalize discrimination against LGBTQ and any other individuals that they disagree with. And that’s not only un-American, it’s also unfaithful.

IF YOU ARE A RELIGIOUS LEADER, YOU CAN HELP OPPOSE THE RFRA IN GEORGIA. PLEASE CLICK HERE TO HELP SEND A MESSAGE TO GOV. NATHAN DEAL THAT FAITH LEADERS OPPOSE THE RELIGIOUS FREEDOM RESTORATION ACT.

March 30, 2015 To The Point: The Facts About Indiana's RFRA
Recent Comments
0 | Leave a Comment
Browse Our Archives
Related posts from Nomad