The Scandal Of The Evangelical Academic Institution

The pressure is on at Wheaton College, a historic evangelical college outside of Chicago, after the administration placed tenured professor Larycia Hawkins on 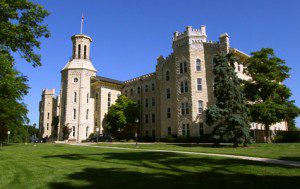 administrative leave for wearing a hijab and expressing her belief that Christians and Muslims worship the same God. Hawkins’ attire was meant to “show solidarity with her Muslim brothers and sisters.” Hawkin commented further by making the assertion, “Muslims and Christians worship the same God,” which only added fuel to the fire and provoked charges of heresy against Dr. Hawkins. These grounds are what caused Wheaton to place her on administrative leave while they investigated.

As I have watched this story unfold, I’ve been reminded of my own experience within the evangelical academic institution. In 2014 I graduated from Moody Bible Institute, another prominent evangelical college just miles away from Wheaton, in the heart of downtown Chicago. During my four years completing my undergraduate degree at Moody, I became increasingly disturbed by the lack of academic freedom that existed for both students and professors.

As a freshman, I launched a radio program on the student radio network that sought to interview various theological voices from outside of our traditional evangelical fold, in order to help our community better understand the views of those who differed from us. One would think that at an institution of higher education, such a pursuit would be permissible, if not celebrated. But after just a few months of conducting interviews with theologians and leaders that many in our community considered “heretics,” my radio show was canceled and I was called into the Dean’s office to discuss my theological “fitness” to be at Moody.

This experience was traumatic for me as a young evangelical who was earnestly seeking to understand the perspectives of those who saw the world differently than I did. I wanted to explore and to be challenged in my beliefs, trusting that if what I believed was really true, it could certainly stand up against the arguments of others. But instead of being encouraged to continue exploring, my pursuits were reprimanded and my radio show was canceled. As I sat in the Dean’s office explaining my intentions for the show as a student at an academic institution, the Dean stopped me and said, “Brandan, we are not primarily an academic institution. We’re a discipleship institution.”

As I heard those words I was stopped dead in my tracks. Every part of my situation made sense in that moment. What the Dean’s statement actually translated to was, “You’re not here to be educated, you’re here to be indoctrinated.”  That was Moody’s intention. I responded to the Dean, “Well I wish you would have told the students that during the application process,” which was unusually snarky for a timid young man like myself, but I really meant it. I had come to Moody so I could be educated, challenged, and to grow. And though no one at Moody was a more committed evangelical than I was at this stage of my life, I remember being utterly disillusioned when I realized that this so-called academic institution actually existed not to give an education to its students, but to create an army of students with one unified world view and belief system, promoting a narrow, singular kind of Christianity in the world.

Despite the fact that the Dean didn’t think that Moody was an “academic institution,” many of the professors flatly rejected that premise. Throughout the rest of my time at Moody, I encountered a small handful of professors who were truly interested in educating their students, and not merely indoctrinating them. Professors who introduced me to new ways of thinking that challenged my evangelical paradigm and opened me up to a new world of possibilities. Professors who were like Dr. Hawkins at Wheaton. People of deep Christian faith, sure, but more importantly, people who understood that if our faith was as firm and true as we say it is, can certainly withstand the challenges of other worldviews and perspectives. Professors who were more committed to being a part of the wide stream of historic Christian orthodoxy, rather than conforming to a narrow brand of American Evangelicalism.

These are the professors that made my experience at Moody worthwhile. They are the reason that I stuck around after being called into meetings with the Dean five more times over the course of my 4-year career to discuss my “theological fitness” for Moody.  They are the professors that give credibility to the evangelical academic institution because they were actually dedicated to educating their students, to challenging their belief systems, and to helping them formulate their own individual thoughts and world views, rather than seeking to force them to conform to a cookie cutter set of beliefs determined by the school’s donor base.

As I watch Dr. Hawkins’ story unfold, I am reminded that it was professors like her who redeemed my undergraduate experience. The professors who refused to conform to a set of beliefs in order to appease the donors, but who took seriously their role as a Christian educator at an institution of higher learning. And while I believe that there are a number of forces at work behind Wheaton’s decision to place Dr. Hawkins on academic leave, including Islamophobia and Gynophobia (both of which run deep in the evangelical world), I believe that what we are actually witnessing is the exposure of evangelical academic institutions as centers of indoctrination instead of education. The problem is not that private colleges and universities are allowed to promote their own belief systems or doctrines, rather, the problem is when no alternative perspectives are welcomed on campus- that is when they fail to be an academic institution.

As Dr. Hawkins’ story continues to be told around the nation, I hope that my fellow evangelicals will rise up and challenge Wheaton, as well as other colleges and universities, to function with integrity, to cease being beholden to their donors, and to allow for the unkempt, challenging process of true education to occur within their institutions. This is truly what the next generation of evangelicals needs, a robust education that engages with and understands the multiplicity of worldviews that surround us in our increasingly interconnected, pluralistic, and globalized world. If Dr. Hawkins doesn’t have a place at Wheaton because her  worldview might not line up identically with the institutions positions, then Wheaton is doing a great injustice to the students  it seeks to educate and it’s credibility as an academic institution.