Our Love Must Expel Fear (On Orlando)

Our Love Must Expel Fear (On Orlando) June 14, 2016 Brandan Robertson

I was standing at a gay bar in London when news flashed across my iPhone that there was a shooting at an LGBT+ nightclub in Orlando. I was standing in the street with hundreds of other LGBT+ people, conversing, laughing, and celebrating life. I saw the news and my initial reaction was to sigh in disbelief, but to presume that this was just another tragic shooting that I’ve become all too familiar 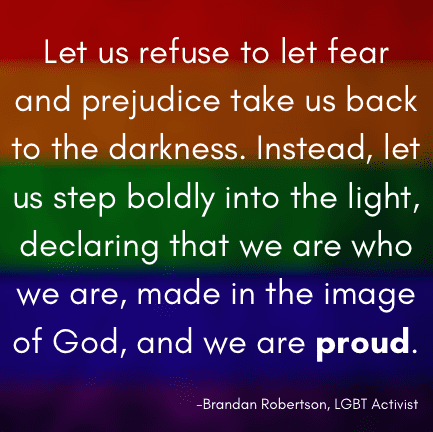 with hearing about in the U.S. I whispered a brief prayer for those involved, and I put my phone away and continued to enjoy my time with friends.

I continued on with my evening and the news continued to flash across my phone. The death toll went higher. The suspected motive: terrorism. And the club was targeted because it was an LGBT+ nightclub. That night as I laid down, I was overwhelmed with emotion. I have been on a tour across the U.K., speaking on LGBT+ liberation and the importance of embracing our full selves. I have spent nearly an entire week with LGBT+ people, sharing life with them, hearing stories of heartache and pain, and being reminded that we’re all truly in this together. I was beginning to feel a spark of hope that things in our world were truly changing for the better. That our churches and our societies were truly awakening to the beautiful gift that is queer people, and that our love was drowning out the hatred and fear.

But as I lay in my bed, a moment of doubt rose in my mind. In 2016, how could such an atrocity still happen? How could a young man, so tormented by his fear of queer love, carry out such an act of hatred? Maybe things hadn’t changed so much after all.

In the recent days, as I’ve watched the news from around the world, as I have seen the displays of support for the LGBT+ community in Orlando, and as I have heard the sacred names of those who were lost in that nightclub read over and over again, I have chosen to believe that hope is not lost.

Every one of those people who were lost in that nightclub were there because that club provided a sanctuary for them to be free, to embrace their truest and fullest selves, and to truly let their light and love shine. Their lives had tasted the liberation that was possible for LGBT+ people in that club and that night, a deeply broken, fearful individual decided to violate that liberation. To cut short their lives because he could not fathom the bigness and beauty of their love.

Their names, faces, and stories speak to us now as witnesses of the power of love, each name and face representing a soul that was on the journey of life, of liberation, of discovering and embracing all that they were created to be. Their lives speak to us, calling us to each to step forward, to come out, to confront this act of terror with the power of pride, and to let our love shine forth in the world. There are no answers, no justification, and truly no consolation for the families, friends, and communities of those who died that night.

We must continue to remember the names, the faces, and the stories of every life that was lost, and allow their lives to propel us forward. Some of them were out to their friends and family. Some were not. Some were allies, mothers, and friends. All of them bear witness to us now and call to us to embrace love, to fight fiercely against the ideologies that breed fear and hatred, and to show the world that queer love is true love, that it is the very love of God. Their lives call us to no longer tolerate the beliefs and practices that make LGBT+ people second-class citizens in our world, perpetuating the lie that we are somehow disordered.

The only way to fight such acts of terror is with the power of love. And love does not stay silent. Love speaks out. Love does not allow violence to continue, but works tirelessly to call out the roots of terror and demand that they are changed. This is a message for our churches, our governments, our schools, indeed, every aspect of our world. Nothing less than full inclusion, full acceptance, and full embrace of LGBT+ people is acceptable, for nothing less than that will kill this fear and allow our love to be magnified in your midst.

Fear breeds on misunderstanding and ignorance. It grows when not in proximity to the people that it’s against. Fear breeds on separation, allowing us to demonize from a distance. But love calls us together, to union. Love calls us to relationship, to the full embrace of those whom we fear the most. And in that embrace, something miraculous happens. The power of union, of togetherness, of proximity with the ones whom we fear the most transforms us. It expels our fear. And it magnifies love. This is the path that leads to life. This is the path that will expel hatred and fear in our world.

May this unthinkable tragedy cause all of us to pause, to think about what we believe, how we live, and what we want our lives to look like. May the lives of each one lost call us to boldness, empower us to step forward, and enable us to say what needs to be said, do what needs to be done, and be who we were created to be. May each of the 49 lives that were lost be our inspiration to do the work and to be the change, no matter what the cost. It is the only way to honor their lives,  to rid our world of fear, and to allow love to flourish.

May 26, 2016
Dear Church (A Frank Letter From A Queer Christian)
Next Post