This is the introduction to a series of blog posts outlining principles of inner-reformation taken from the life of St. Francis and Martin Luther. This series was prepared as a series of talks for the Order of Lutheran Franciscans 2017 Retreat.

We are in a moment of unprecedented change in our world. On literally every continent, there is political upheaval, social unrest, and religious turmoil that are beginning to reach its boiling point.

Over the course of the past decade, a number of prophetic voices have risen up and spoken about this moment that we are now living in, a period that was coming in which everything about how we live, think, believe, and see the world would be challenged and transformed.

These seers and prophets looked at the signs in their day that were the early tremors indicating a day that would soon come where every aspect of the way our world works would have to be radically restructured and renewed.

And these modern prophets and seers drew on the wisdom and insight of a long line of saints who have spanned the entire length of human history, who called for deconstruction, expansion, reformation, and renewal of the way humans saw and lived in the world.

Among the most influential of these prophetic voices of old were the two Saints whose legacy your order is built upon, St. Francis of Assisi and Martin Luther. Both of these men unwittingly stepped into prophetic roles in their day that fundamentally shifted the way the Church and society would function for good, and today, we would do well to lean back and listen to the wisdom and practice of these Saints as we stand on the brink of a new reformation of Spirit, one that many have said will be the most expansive and impactful reformation that has ever been experienced on earth.

Jesus taught us that all true and substantial transformation in the world must first begin with the hearts of those who will bring about that transformation. This is what he meant when he said, first, that the Kingdom of God was within us, and then prayed for us to manifest the Kingdom of God on earth, in the world, as it is in that Heavenly Realm of the Eternal Soul.

This is the fundamental rhythm of Christianity. Inward transformation begets outward renewal. We are first filled up and then we are poured out. This is what our central act of worship, the Eucharist, embodies- first receiving from God the gift of grace, and then being called to go out into the world, breaking open our own bodies, and pouring out our own lives for the good of our friends, neighbors and enemies.

If we are to be active and effective participants in this new reformation that God is bringing about in our day, we must first allow the wild, untamable Spirit of God to begin that reformation in our own lives.

But what does this look like? How do we open ourselves up to allow the Spirit to have her way in our souls? This is the question that every faithful seeker of God has wrestled with, and is a question that Francis and Luther spent much time exploring.

For St. Francis, the initial moment of soul reformation was sparked during two personal moments of conviction. First, Francis, feeling lost and dissatisfied with the life he was living as a solider, found himself praying in the forsaken chapel of St. Damian in Assisi. In the midst of his prayer, he hears that still small voice of God within himself say, “Go, Francis, and repair my house which you see has fallen into ruin.” Francis hears these words and takes them literally, and dedicated himself to repairing the run down chapel that he found himself in.

Isn’t it funny how when we receive a prompting from the Spirit, we often interpret it in the most literal terms so as to avoid its much broader, and more costly ramifications? Francis repaired the chapel of St. Damian, but the Spirit’s prompting was about far more than that. It was call to repair the Church, which had fallen far away from the true heart of the Gospel that Jesus proclaimed and embodied.

Instead of focusing on the manifestation of the Kingdom of God both within the individual and in the world, the Church had become focused on piety, on religious orders, on vain pursuits that had little to do with the inner and outer journey of redemption. The Church had indeed fallen into ruin, and God was prompting Francis to do something about it.

The second moment of transformation for Francis was just a little while later, when he heard a homily based on Jesus teaching in Matthew 10:9, where Jesus proclaims that the Kingdom of Heaven was within and upon his disciples, and that in the pursuit and proclamation of the Kingdom, his disciples needed no earthly belongings. Francis, again, taking these words literally, throws away all of his possessions and immediately embarks on a missionary journey throughout the Italian countryside, proclaiming this message of simplicity, love, and grace, which is the true heart of the Gospel of Christ.

From this moment onward, Francis began to gain followers, those who had grown disillusioned with the principles and practices of the Church and sought a more Christ-like way of seeing and being in the world. Within a short period of time, Francis developed a rule of life that would former the basis of one of the most famous, revolutionary, and important monastic orders in the history of Christianity, the Franciscans.

Similarly, for Martin Luther, his initial moment of transformation came after entering into monastic life and growing deeply disillusioned by the practices of the Church. One day, while reading Psalm 22 where the psalmist proclaims, My God, My God, why have you abandoned me? Luther recognized that such disillusionment with God and the institutions which represent God is as old a spiritual experience as salvation itself. Luther continued to study and seek God, in spite of his sense of angst and distance from the Divine, and two years later, when reading the words of the Apostle Paul when he wrote the just shall live by faith, Luther realized that salvation had little to do with believing the right doctrines or conforming to the traditions of the Church, but rather on simple faith and openness to God.

This moment of hearing the voice of Spirit through the words of Scripture ignited a flame within Luther that caused him to begin to question and ultimately call for the overturning of the unjust teachings and traditions that the Church had adopted. Within a few years of this awakening, Luther nailed his now infamous “95 Theses” to the door of a cathedral in his town, and called for the Church to repent and reform of her greedy and un Christ-like teaching and practices, which ignited the movement that become known as the Protestant Reformation.

These three particular moments represent a number of principles of inner reformation that each of us must awaken to if we are to be of any use to the Spirit in her present work of transforming the world. Throughout this week, I will outline six key principles that we can derive from the life of Luther and Francis to aid in our own inner-reformation of Spirit, so stay tuned. 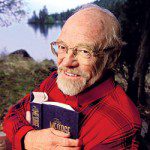 The Theology of Riot
The New Paraclete
Related posts from Nomad