Maybe “Left Behind” Was Right… 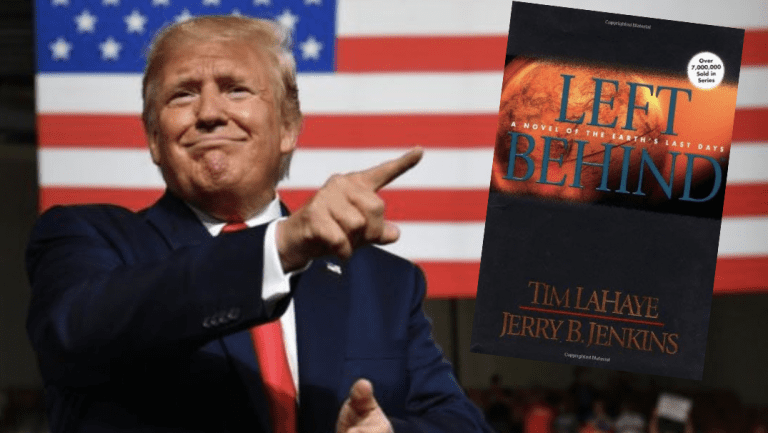 Church would be taken off the earth and spared from the judgement of God that will be poured out on the world once Christ returned. The thinking was that Jesus first came as the Lamb of God, slain for the world, but when he returned, he would the Lion of Judah, the conquering king who would defeat Satan once and for all and create a renewed world of justice and peace.

This stream of theology- known as “dispensationalism” and “pre-millennialism”- was popularized among Evangelicals by two Christian fiction authors named Tim LaHaye and Jerry Jenkins who penned a series of books called “Left Behind”, which told the story of what the end of the world would look like as the events prophecied in the Book of Revelation played out in the world. The “Left Behind” stories became the backbone of much of the preaching in American Evangelical churches, and convinced thousands of people to buy into what was previously a fairly obscure version of “eschatology” (theology of the end of the world).

As I have grown and my faith has evolved, I have come to realize that the theology that I learned from “Left Behind” is toxic and ultimately not based in a historically rooted understanding of the writings in the Book of Revelation. This theology centered on a fear that God’s judgement could come at any moment, and this belief caused me unimaginable anxiety as a young boy, who literally would panic whenever I heard the sound of a car horn because this theology believed that a great Archangel would sound a trumpet at the moment Jesus was returning to bring judgement.

This theology has also allowed Evangelicals to be lackadaisical in their approach to justice issues because it teaches that because this world was going to be burned up in judgement the only thing Christians need to focus on is converting people to Christ, not caring for their material needs or take care of our planet.

Once I left this theology behind (pun intended), I never have looked back. I’ve never considered it to have any legitimacy.

At the core of the “Left Behind” narrative is the story of the Anti-Christ, an evil world leader who is possessed by the devil himself who rises up, convinces the masses (including all the “false believers”) to follow him, who promises to bring peace to Israel, and who establishes prosperity for his nation and the world.  The goal of this world leader is to enamor people with all of the things that keep them from a right relationship with God, and to become a functional god for them. This leader is a true wolf in sheep clothing, who may also claim to be a follower of Jesus but whose heart is fundamentally opposed to him.

It’s striking to me that as I write those words, which are literally the description of the anti-Christ in “Left Behind”, that I feel like I am describing an actual world leader that exists in our day… a world leader who:

Of course, I am talking about the sitting President of the United States, Donald J. Trump.

Now, I truly am not one to support the game of any political party using religious slurs like “anti-Christ” against another candidate (President Obama received that slur frequently from the Right), but it’s hard to not see the remarkable parallels between this popular Evangelical idea of what the end of the world would look like, and the present reality that we’re experiencing in our world.

I was finally pushed over the edge earlier this morning when I woke up to find President Trump tweeting the following: 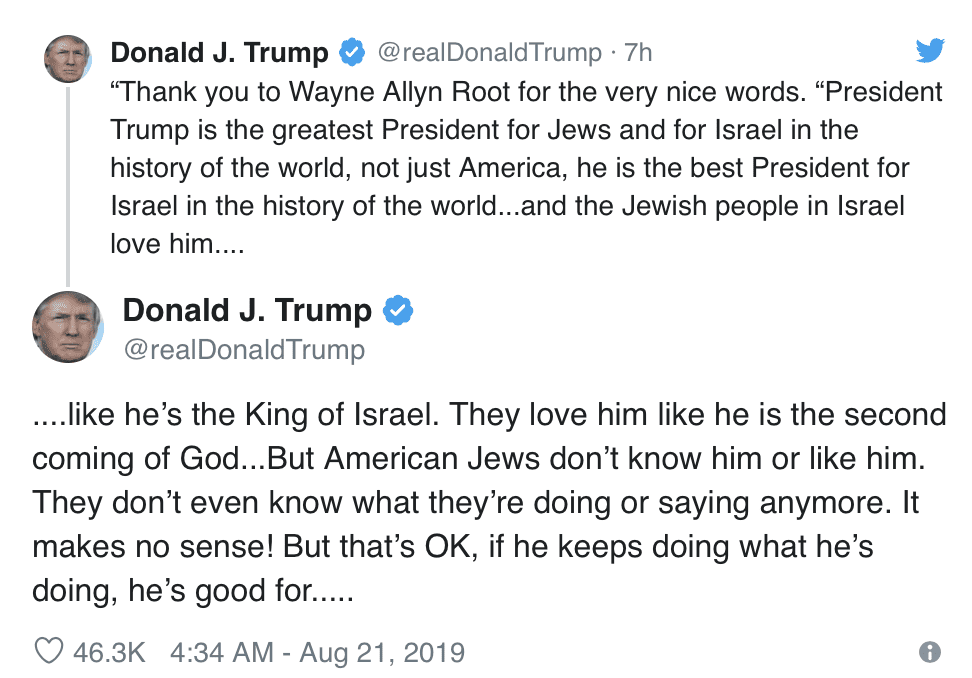 In one Tweet, the President checked at least half of the boxes required to call him the Anti-Christ based on the theology of “Left Behind”. In this tweet, he endorses the comments of Wayne Ally Root who called him:

Now, it’s one thing for some extremist public figure to say this about a President; it’s a whole different ballgame when a President affirms and repeats these words about himself to the world. The only logical conclusion when something like this occurs is to assume that the President believes these very things about himself….that he is the greatest ruler, he is a Messianic figure, that he is, in fact, God.

While I no longer identify as evangelical, I still have a deep affinity for my evangelical siblings in faith. Yet as I have watched the Trump Presidency unravel every day as if it was pulled out of “Left Behind“, I have been stunned that so many Evangelicals have failed to identify the parallels between the Anti-Christ and this President. To be clear, I still don’t believe that the “Left Behind” series has almost any theological legitimacy, but I do think the principles that they communicate of how easily the Church can be deceived by those who lure it with power, wealth, and platform have never been more relevant than they are today.

Each day, the President reveals himself to be further and further from Christ. Im not even talking about his policies or political views…I’m simply looking at his character and actions done in public. In the classic book “Mere Christianity”, C.S. Lewis wrote:

I think it is safe to say that our President is proud…audaciously proud. So proud that he is willing to repeat a praise of himself that literally equates him to God. And as long as pride plagues the heart of President Trump, he will continue to align himself not with the way of Jesus, but with the ways of evil. The “Left Behind” series champions those who reject the ways of the Anti-Christ and who advocate for the ways of Jesus. It is my sincere hope and prayer that Evangelicals will wake up, see the wayward ways of this President, and cling once again to the message of that radical Rabbi from Nazareth, Jesus.

July 3, 2019
We Need A New Kind Of Independence Day
Next Post