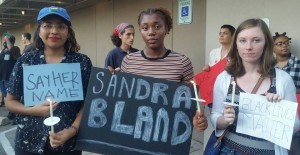 Outside of Planned Parenthood’s Greater Memphis area location, members of the Say Her Name movement as well as The Memphis Feminist Collective and The Official Memphis Chapter of Black Lives Matter held a candlelight vigil for the women who’ve lost their lives at the hands of police brutality. As soon as the event popped up in my Facebook feed, I felt compelled to attend. Not only as a longtime pro-choice advocate and Planned Parenthood supporter, but as someone who worries how police violence affects the women I consider my friends, my mentors and members of my community.

After the moderately publicized death of Sandra Bland, the Say Her Name movement began under the belief that African American women tend to be left out the dialogue surrounding the current spike in institutional violence. This was the first vigil organized in Memphis. I spoke to the event organizer Sydney Jordan who told me “it got started because I and some other core organizers realized that black women as a whole don’t necessarily get as much attention as black men when it comes police brutality. We really just wanted to focus on them [the women] because they’re usually marginalized and pushed to the side. Not only in their life, but in death, too. So, we wanted to mourn them specifically.” Indeed a list of these women’s name were read aloud to the some 50 to 75 people in attendance.

Another Say Her Name representative takes to the loud speaker and from the middle of a circle formed by demonstrators, she begins “Sandra Bland.”

“Sandra Bland” the crowd cries back in unison.

“Shantel Davis” responds the crowd once again. Over and over the names are read back and forth. A list of at least 40 names as well as an acknowledgment of the countless other African American women whose names we may never know, all killed by police violence. Next on the agenda was a reading of Audre Lorde’s “A Litany for Survival” with noted emphasis on the line “we were never meant to survive.”

The group Showing Up for Racial Justice, aka SURJ, was at the event as well. I’ve been interested in this group’s message since I found out about them at this year’s Cooper/Young festival. They outline their mission statement on their website. “SURJ is a national network of groups and individuals organizing White people for racial justice.” I think too often well-intentioned white people want to be educated about race and racial injustice, but we lay that burden on people of color. We expect them to educate us, but having this group–that is separate from the established safe spaces of people of color—lets us educate each other. SURJ facilitates a dialogue for white people on how best to support social justice issues without dominating the conversation.

I was curious as to how Planned Parenthood, an organization usually concerned with reproductive health, came to host a demonstration connected with so many other groups. I asked PP employee Aimee Lewis who told me they were more than happy to get involved. “I was contacted by a member of the Memphis Feminist Collective. They asked if they could have the event here and we were really honored that they thought of us. As an organization focused on women’s issues and women’s autonomy, we were proud to say yes.”

The night concluded when a Memphis Area Black Lives Matter member shared with all of us the heart breaking story of Bresha Meadows. She told us that at only 15-years-old is facing life imprisonment for the shooting of her abusive father, Johnathan Meadows. Bresha acted in self-defense when she feared her father’s abuse would prove fatal to her and her mother. But the verdict remains and Bresha is still incarcerated. This was a reminder to us all that not only are black women more likely to be fatalities of racialized and institutional violence, but domestic violence as well.

As someone familiar with Planned Parenthood, I expected the usual band of pro-life protestors who were dutifully outside when the vigil began. (One of whom was holding a sign that read “baby lives matter.” I wish I was making that up.) But, the chorus of honking cars driving past, up and down Poplar Avenue wasn’t for them that night. I was inspired by the display of solidarity. A community was brought together from that vigil by the necessary objective that black women need to be a part of the ever-growing conversation on the abuse of power by authorities.

Deven Lyle is a student at the University of Memphis 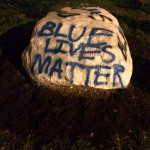 What Does It Mean to "Believe in the...
The author of the Bible's Gospel of John says of Jesus of...
view all Progressive Christian blogs
What Are Your Thoughts?leave a comment