#MLK, #BLM and the Rhetoric of Confrontation 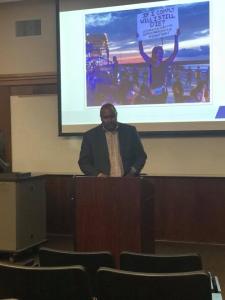 On Friday, February 16, 2018, I gave a talk titled “If We Can’t Get It, Shut It Down:” MLK, BLM and the Rhetoric of Confrontation.”  Hosted by the History Department at the University of Memphis, I argued that King, near the end of his life, no longer believed that government officials would “do the right thing,” King called for a campaign of massive civil disobedience that would lead to economic boycotts and shut down entire cities. By doing this, King asked activists to bear witness to their suffering in hopes that the action could convict the government to do the “right thing.” In closing, I argued that BLM whether knowingly or not, have adopted many of the ideas that King argued during the last year of his life thus becoming the natural extension of King’s vision in the last year of his life. Below is a part of that presentation.

On July 10, 2016, more than 1,000 frustrated and fed up American citizens took to the I-40 Bridge connecting Arkansas and Tennessee in an act of mass civil disobedience to disrupt and shut down traffic. These American citizens were protesting the latest videos; the murders of Alton Sterling and Philando Castile that had gone viral causing another round of trauma and pain in the minds and bodies of African Americans. Television stations in Memphis broke away from regularly scheduled programming to cover the protest. The local newspaper provided live updates on its website while other media outlets offered “live” coverage of the event through social media.

People overheard one protester shouting, “We’re trying to get equal rights. We want things to be fair. We want our voices to be heard. Black Lives Matter activist Shahidah Jones called the protest something similar to a family reunion. She remarked, “I saw people I hadn’t seen in years.” Activist Tami Sawyer reminded onlookers and the media that what was going on across the country where people “saying enough is enough,” She continued,

I think about this last year. People all over the city and the Commercial Appeal celebrated the 50th anniversary of the Selma march, where Dr. Martin Luther King and hundreds of African-Americans were hosed by water and attacked by dogs and beaten by police during a peaceful protest for their rights. Fifty years after that, we’re still fighting against the same injustices, and while it is true that blocking traffic could have some dire consequences, the chance of that happening here are still much more slimmer than a black person being faced with systematic racism and injustice.

Labor and wage activist Jayanni Webster, who was one of the last ones off the bridge that night remarked that taking the bridge so openly was the “only opportunity that they would ever have in their life to even talk to a police officer in a way that won’t get them killed. People in Memphis never have the opportunity to confront those in power who represent a failed state of the economy and the politics of this city that continually oppresses people.”

Pastor and University of Memphis Department of Communication graduate student Earle Fisher were one of the ones on the bridge that night. He told independent journalist Wendi Thomas that he was “happy as shit,” about taking the bridge because he “knew it would take a moment like that to change the trajectory of what the movement in Memphis would look like.” Activist Keedran Franklin noted that “A lot of people were crying together, but it was like tears of joy because a lot of people were hurt. That’s the only reason why we were up there,” “Not being heard, not being felt, not enough resources.” While the protest inconvenienced motorists, some that night showed signs of solidarity. One trucker allowed demonstrators to climb on top of his truck to hold up signs and raised fists. Community activist Nour Hantouli, told a reporter that the incident was a “very remarkable sign of solidarity from someone who is caught in the very inconvenient position of that demonstration,” but further added, “of course, that got turned into ‘thugs trashing property,’ you know, the typical racist narrative.”

City officials, on the other hand, had a different view. While claiming that he understood the protester’s frustration, and promising an open dialogue toward effecting change, Interim Police Director at the time of the incident, Mike Rallings remarked that a “bridge shutdown was not the proper way to protest.” Claiming to stand with the protesters, Rallings commented, “I don’t want us to shut down a bridge, I’m with you; I’ll march with you. But we need to do it together; we need to have a dialogue, we need not be shutting down bridges.”

Shelby County Commissioner Terry Roland said that while he was “proud we didn’t have any violence, a lot of those people weren’t even from Memphis, and they should not have blocked the roads, especially a federal highway.” Memphis Mayor Jim Strickland, while appreciating the fact that the protest “remained peaceful,” he cautioned that “citizens must protest in a legal way. Stopping traffic on the interstate is not legal.” A day before the I-40 bridge take over and protest, Atlanta mayor Kasim Reed, after citizens there shut down a major highway infamously proclaimed, “We’re the home of Dr. Martin Luther King. The only thing I ask is that they not take the freeways. Dr. King would never take a freeway.”

Despite, as the Root writer Jeanne Theoharis notes “Reed’s claim is historically absurd,” noting that King “took many a highway—most famously in the Selma-to-Montgomery march,” people continue in speaking of protests, to use the “wrong way”; “right way” dichotomy to silence any activity.  Especially when it comes to Black Lives Matter activists, some well-meaning and sympathetic supporters also have been guilty of policing the movement’s strategies. Some like Oprah Winfrey even questioned if BLM had any leaders that could affect “real change.” Others, such as Rev. Barbara Reynolds went even further in her essay published in the Washington Post.

Reynolds, herself active within the Civil Rights struggles of the 60’s, wrote that while the “baby boomers who drove the success of the civil rights movement want to get behind Black Lives Matter, the group’s confrontational and divisive tactics make it difficult.” She remembered that activists in the 1960’s “confronted white mobs and police with dignity and decorum, sometimes dressing in church clothes and kneeling in prayer during protests to make a clear distinction between who was evil and who was good.” She further wrote that activists in her generation were “trained in the tradition of Martin Luther King Jr., we were nonviolent activists who won hearts by conveying respectability and changed laws by delivering a message of love and unity. BLM seems intent on rejecting our proven methods. This movement is ignoring what our history has taught.”

However well-meaning, these historical descriptions just are not accurate. This misremembering not from opponents but supporters of King lead many to believe he was just a utopian dreamer who led a few approved and sanctioned marches. In this presentation, I would like to challenge some of these contemporary embedded narratives by examining the more radical King. Specifically, I examine King’s rhetoric as a synecdoche or as representative of the Civil Rights movement most people profess to understand. Drawing from Robert Cathcart’s notion of managerial and confrontational rhetoric when applied to social movements, King’s earlier rhetoric seeks to be non-confrontational and seeks persuasion—a changing of hearts and minds in accompanying goals and objectives. However, as time went on, I argue that King begins a rhetorical project with the aim not necessarily to persuade but to bear witness through confrontation that would hopefully at best lead to conviction.

During the last year of King’s life, his ability to persuade and to gain a national consensus around issues of war, poverty, economic injustice, and the inequality suffered by blacks and all people of color had waned. Faced with increasing hostility to him and the movement along with the rising white backlash that eventually would give birth to Nixon’s silent majority coalition, King knew that moral suasion would not give him the results that he had hoped. Thus King begins a campaign, grounded in non-violence that aimed to force the government to act on behalf of the movement. No longer believing that government officials would “do the right thing,” King called for a campaign of massive civil disobedience that would lead to economic boycotts and shut down entire cities. By doing this, King asked activists to bear witness to their suffering in hopes that the action could convict the government to do the “right thing.” I conclude by arguing that BLM whether knowingly or not, have adopted many of the ideas that King argued during the last year of his life becoming the natural extension of King’s vision in the last year of his life.

To listen to this and the rest of the lecture, click here.

Donate to the Work of R3
Like the work we do at Rhetoric Race and Religion? Please consider helping us continue to do this work. All donations are tax-deductible through Gifts of Life Ministries/G’Life Outreach, a 501 (3) tax-exempt organization, and our fiscal sponsor. Any donation helps. Just click here to support our work.
Previous Post

February 2, 2018
Silence and Sexual Assault: Toward a Better Response from the Church
Next Post