Race, Shrinking Whiteness, and Four Qualities of the Moral Imagination 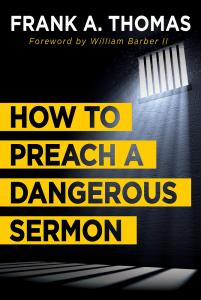 On Tuesday, February 13, 2018, Dr. Frank A. Thomas delivered a lecture titled, “Race, Shrinking Whiteness and Four Qualities of the Moral Imagination.” His basic argument in the lecture was that we need increased moral imagination to discuss and effectively deal with the perennial issue of race and whiteness, including the phenomena of “shrinking whiteness” in America. Based upon the method of close reading, Thomas examined the moral imagination of Robert F. Kennedy, evidenced in his famous speech on April 4, 1968, the night of the assassination of Martin Luther King Jr. in Indianapolis, Indiana. Kennedy’s speech exhibits four qualities of the moral imagination that are applicable and necessary if we would advocate for civic engagement and a world of peace and justice in our teaching and preaching. The lecture draws from chapter one of his latest book, How to Preach A Dangerous Sermon.

Dr. Thomas (Ph.D., University of Memphis, 2008) currently serves as the Director of the Ph.D. Program in African American Preaching and Sacred Rhetoric and the Nettie Sweeney and Hugh Th. Miller Professor of Homiletics at Christian Theological Seminary, Indianapolis, Indiana.
To listen to the audio of the lecture, click here.
To watch, see below:
Previous Post

February 18, 2018
#MLK, #BLM and the Rhetoric of Confrontation
Next Post

I loved Netflix Messiah. You might...
Brad Jersak
Related posts from Rhetoric Race and Religion

Let There Be Witnesses!
The Senate trial of President Donald Trump begins effectively tomorrow. It is...
view all Progressive Christian blogs
What Are Your Thoughts?leave a comment