Why Didn’t Jesus Just Handwrite the New Testament Himself? 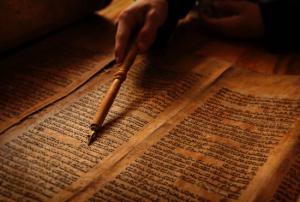 Have you ever wondered why Jesus didn’t write the New Testament in His own perfect handwriting?

If He had, then nobody could argue that Scripture wasn’t always literally accurate and historically perfect. And yet, Jesus didn’t do this for a very obvious reason.

Had Jesus written the Gospels Himself, then we could then read them WITHOUT the Holy Spirit’s further guidance, and never question their meaning as being anything other than literal.

We would, in effect, idolize literalism since it came directly from the pen of Jesus. This “idolatry of the literal” is exactly what happened to the Ten Commandments written by the “finger of God.”

“It’s like a finger pointing away to the moon. Don’t concentrate on the finger or you will miss all that heavenly glory.” ― Bruce Lee.

This is why God, in all His wisdom, used imperfect men to mediate and write Scripture, so that we would have to ALWAYS depend on the Spirit’s guidance to properly read, understand and apply God’s inspiration.

The finger of Scripture IS divinely inspired, but STILL a human finger, a little bent and twisted perhaps, but still always pointing at Jesus. Because we recognize the finger as human, we will not become fixated on it by giving it some kind of divine status the Lord never intended it to have. Instead, we will follow the finger and thrust our souls upward to achieve orbital interactions with Christ in the heavenly places.

Great Bible scholars have noted the occasional human imprecisions and inaccuracies in the Scripture, such as when Matthew 27:9 misquotes Zechariah 11:13 as having been said by Jeremiah, and also when Acts 7:16 erroneously lists Abraham, rather than Jacob, as the purchaser of the sepulcher from the sons of Emmor\Hamor per Joshua 24:32.

As C. S. Lewis said: “The human qualities of the raw material show through. Naivety, error, contradiction, even (as in the cursing Psalms) wickedness are not removed. The total result is not ‘the Word of God’ in the sense that every passage in itself, gives impeccable science or history. It carries the Word of God.” Or perhaps, better put, it is a finger pointing to the Word of God— Jesus Christ.

“God has not cared that we should anywhere have assurance of his very words – not merely because of the tendency in his children to worship false logic, and corruption of the truth, but also because he would not have his people oppressed by words.

For words, being human, therefore but partially capable, could not absolutely contain or express what the Lord meant. No matter how precise the words used, to be understood the Lord must depend on the spirit of his disciple. Seeing it could not give life, the letter should not be throned with the power to kill. It should be only the handmaid to open the door of the truth to the mind that was of the truth.”

~George Macdonald, “Truth is of the Spirit, not of the Letter”.

The inspiration is the key. Just as the shell of a nut “husks” the seed within, so does the literal shell of Scripture “husk” the inspiration of God encased within. Scriptures are divinely inspired truths husked to varying degrees by human perceptions, mis-perceptions and partial perceptions.

Let’s consider some examples. Peter’s revelation that Jesus was the Christ was a PERFECT and COMPLETE human perception of a divinely inspired truth. Flesh and blood didn’t reveal this to Peter, but the Heavenly Father. Matthew 16:17.

However, Moses’ striking of the rock in anger was a PARTIAL perception of God (Numbers 20). Moses was part right and part wrong in his perception, because while God inspired Moses to perform a miracle of provision for the parched Israelites, God did not want it delivered in Moses’ wrathful tone of striking the rock. Rather, God wanted the miracle done by Moses merely speaking to the rock. Moses failed to sanctify the name of the Lord here, and it kept him out of the Promised Land.

Finally, many Old Testament saints totally mis-perceived the inspiration of God altogether, such as when Job attributed evil to God or when David prayed for Babylonian children’s heads to be bashed against the rocks (Ps. 137:8-9).

The bottom line is that Scriptural inspiration does not mean that the men who wrote the Bible had perfect perceptions of God. In fact, Scripture tells us that prior to Jesus, no man had “seen God at any time” (Jn. 1:18; 6:46). Thus, without the Holy Spirit’s guidance through Scriptures, we are blind to God’s true nature.

Paul said we are “able ministers of the New Testament, not of the letter but of the spirit: for the letter kills but the spirit gives life.” 2 Cor. 3:6. Scriptures then warn us on their face not to merely read them “literally” and in “our own understanding.” Our mistake is in thinking these admonitions don’t apply to us. In other words, we can wrongly presume that when we read Scriptures, we automatically are already in the Spirit, or that our past understanding of them is automatically right and Spiritual.

Rather, the premise I am suggesting is that our indwelling Christ is the only “quickening agent” when it comes to scriptural interpretation. Literalists wrongly treat Scriptures as the landing pad of truth. In other words, all truth must land on its “literal” runways to be authentic. However, the proper way to view Scriptures is not as a landing pad, but as a launching pad. Scriptures, when they are Spiritually quickened to us by the Holy Spirit, propel us into Heavenly interaction with the Trinity. This quickening comes from the “rhema” word of God, from the very now mouth of God to the very now heart of man.

December 28, 2019
Is Jesus Still the Savior of the World?
Next Post