When I think of ISIS I’m more inclined to think of “Political extremism and the religious justifications for terror.” Because I really don’t think Religious Extremism is a root cause of the ISIS phenomenon.

On September 23rd I spoke on a panel about ISIS – my notes are found below.

If we look across history, ancient and modern, we find that terror as an approach to gaining and maintaining political control is not uncommon. We might think, for example, of Timor – the Mongol / Muslim conquerer known for stacking heads outside the cities he conquered. Or the Orthodox Christian known commonly as Vlad the Impaler for his way of displaying the victims (mostly Muslim) of his violent wrath.

In more modern history we have the Lord’s Resistance Army in West Africa,  The God’s Army (led by adolescent Thais), and any number of radicalized Jihadi groups in Indonesia, and sometimes their Christian opponents. Under-reported terrorists groups in Kalimantan, Mindinao, and Sulawesi remain active. And of course we have to think of the genocidal violence in Rawanda, the Congo, and West Africa.

But it isn’t a religion that unites these groups, or indeed any religion. The common denominator, amply found in the case of ISIS, is the presence of a failed state (or failure of state power) and thus a significant power vacuum, an angry and dis-enfranchised minority, and a desire to establish political control without having the actual means to immediately maintain that control by force.

I realize that there are some vicious and brutal people in the world. They do violence every day. But apart from acts of revenge or desperation terror is essentially a political short cut, a way to gain control of a population when you don’t have the power or ability to establish more subtle and pervasive bureaucratic methods of control. It is usually followed by extortion, piracy, theft, taxes, bootlegging, drug running and smuggling. Because terrorist states have never been able to develop an actual economy to support an actual government. (My definition, by the way, excludes individual acts with no intended political consequences.)

And again this is the case with ISIS. There has been much wringing of hands over its ability to fund its operations through theft and oil exports, but I think this is misplaced in the long run. Timor’s empire collapsed in a generation because it not only generated no income except through conquest, but actively destroyed the agricultural basis of its economy in Persia, Anatolia, and the Iraq.

So, first there have been many terrorist regimes in human history. And they are build on the politics of fear. But they have shown themselves inevitably to be short lived, collapsing under the failure of fear to create the kind of order necessary for human flourishing and stable states.

So where is religion in all of this? ISIS calls itself an Islamic State, and claims to administer its territories on the basis of Shari’a law, which it uses to justify its terrorist acts. The vast majority of the world’s Muslims, through their leaders both religious and political, have rejected this understanding of Islam. B’y any rational standard ISIS is not Islamic.

Yet we do need to consider how they are able to make this argument to at least part of the Muslim population, even if the vast majority of Muslims and Muslim nations condemn them. We should ask how they are able to recruit people who believe that ISIS really offer a path that is true to Islam.

To do this we need to realize that the word “extreme” doesn’t accurately characterize the religion of ISIS. It is, rather, a kind of apocalyptic fundamentalism that shows the danger of a reading of revelation unrestrained by the wisdom gained through historical experience. It isn’t religion that has gone to an extreme. It is religion that hasn’t gone far enough to fully grasp the Islam it claims to represent.

Muhammad and his companions, followed by the early Muslim jurists, understood that God had revealed God’s will for humankind in manifold ways outside the Qur’an, not only through the thousands of prophets whose existence is an essential of Muslim belief, but through the natural world. Nor is the exercise of human rationality and dialogue irrelevant as a means by which God reveals how humans should relate to one another. Thus Shari’a, God’s command, was discovered through a rational process of exploring the Qur’an, the sayings of the Prophet Muhammad, the wisdom of other religions, long standing customs and traditions, and even the natural world. Only this process of rational discovery could fully grasp God’s will.

And ISIS, and its leaders and frankly their so-called spiritual guides simply haven’t chosen to undertake this long process of discovery. They have rejected the lessons learned in the great historical caliphates of the Ummayads, Abbasids, Fatimids, and Ottomans, not to mention the many minor kingdoms and empires like the Mughals. They drank the Qutb coolaid and believed that they could simply start over from scratch as a light in the world of darkness and ignorance. But even if, and this is a big question, even if they possessed the Qur’an and the Hadith of the Prophet Muhammad as a foundation, they have not shown any inclination to build on it.

So again the leaders of ISIS are not religious extremists, because Islam, when it set off to the ends of the earth to discover the breadth of God’s revelation, the extremes of God’s reach through the whole of creation, created civilizations. ISIS creates wastelands. BUT I hasten to add, its highly simplistic version of religion does have attraction to some people, as fundamentalisms through the ages have a certain attraction.

And this is particularly true among those whose sense of their identity, and thus personhood, is under threat. Fundamentalisms arise when religious complexity, in the form of numerous expressions of faith across a variety of different social classes and cultures, makes the boundaries of an identity blurry and porous and liable to break down or be violated. And this is particularly so when these boundaries are perceived as being violated and under attack. Fundamentalism is a fall back to a more easily defensible boundary of identity.

And lets face it, Muslims have some justification in thinking that their identity, at least as traditionally understood, has been under attack by colonialism and modernity in the last couple of hundred years, and most recently by minority sects that gained political power in the post-colonial era. The boundaries of Muslim identity were proven quite porous, and have at least to some seem desperately threatened.

But in ISIS, and its related movements, this fundamentalism isn’t a fall back to just the five pillars of Islam and the 5 or 6 fundamental beliefs held by Muslims through the ages. These are not sufficient visible and visceral to secure a threatened identity. The beliefs are too internal, to easy to affirm without actually being held. And the pillars, aside perhaps from the daily prayers, have little public presence.

So Islamic fundamentalism, like Christian puritanism or some phases of Roman Catholicism and even one phase of early Judaism in the time of the Macabees insists on more constant and visible forms of conformity. Clothing becomes an essential and constant sign of identity. Non-Islamic religious rituals and buildings are destroyed and non-Muslims are killed or driven out. It is not enough to have a fixed center and a clear boundary. Muslims gripped by this fundamentalism must see only Muslims like themselves as far as the eye can see in order to be certain of their identity.

And soon this visible conformity isn’t enough either. People might be faking it. At a certain level of insecurity about one’s identity, one must constantly test both one’s self and everyone else. Insecurity feels good only in the presence of others who are insecure. And then the terror begins.

A person who is sufficiently insecure can be recruited both to commit terrorists acts as proof to themselves and others that they are truly religious. He or she will create insecurity to assuage his or her own insecurity. These new terrorists will threaten others with un-passable tests to insure that the others are truly religious. If you google Youtube Palestinian Parody of ISIS you’ll find a humorous look at this – and a sharp comment on how these Palestinians believe ISIS has lost track of the narrative of the loss of Muslim identity in the Middle East.

And here we find the religious justification for terror that was initially exercised as a political tool. What we call terror is justified as a process of purification and draws on the insecure, or simply vicious, to execute its strategy. Which is exactly the justification used during the great terror of the French Revolution, the terror of the Spanish inquisition, and the terror of both Stalin’s rise and that of Mao Tse Tung’s Cultural Revolution.

Now none of this offers ready solutions for ISIS, but it suggests at least a couple of three things. First, that we’ll never see an end of insecure and violent individuals who can be recruited for terrorist regimes. That would require a change in human nature, not religion. Secondly, that making Muslims less secure will only create more potential recruits both in the middle east and worldwide. And finally, that allowing one’s self to be overwhelmed by fear simply gives in to the strategy of terror. Those of us who are, rationally speaking, beyond the reach of terrorists must remain unafraid, and calmly rational in our relations to our neighbors.

I was asked at the forum where we could find a solution to fear. The Christian scripture says that love casts out fear. But you cannot love what you have not met in person. If we want to end fear we need to get out from in front of our television sets and computer screens and meet people face to face. Turn off the cable news and go out into the world of real human beings – whether at a church, mosque, synagogue, or temple. There we will find the end of fear.

December 2, 2014 Dialogue in Context - Israel/Palestine
Recent Comments
4 Comments | Leave a Comment
Browse Our Archives
get the latest from
Best of Patheos
Sign up for our newsletter
Related posts from Robert Hunt: Interfaith Encounters 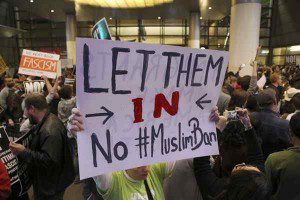 Interfaith
Its Not a Muslim Ban - Its Worse
Robert Hunt: Interfaith Encounters

Interfaith
No Freedom Outside the Box
Robert Hunt: Interfaith Encounters

The Truth and Grip of Feelings
Once awake, an essential path of learning is the art of being...
view all Interfaith blogs
What Are Your Thoughts?leave a comment
Copyright 2008-2021, Patheos. All rights reserved.