Cross-Talk in the UMC 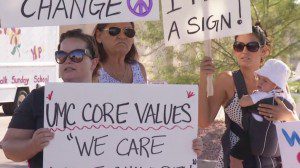 With the United Methodist Judicial Council meeting next week to consider several cases related to human sexuality the interwebs are abuzz with debate, particularly about Bishop Oliveto, who was an acting leader and was consecrated as bishop while married to another woman.

As I read the various blogs and multiple responses one thing becomes clear. United Methodist discussions about human sexuality, while polarized into pro-LGBTQ marriage and ordination and anti-LBGTQ marriage and ordination, involve so many and varied appeals to authority and types or arguments that trying to delineate them might give a little clarity.

One theme runs through these arguments and in some ways shows their relationship to similar debates in other religions. On one side are those who argue that Christianity is about certain essential principles that must be enacted in different ways in different times. For them the Bible and all successive Christian tradition is a contextual document, telling us how those principles were to be enacted in a particular places and times. The combination of general principles and specific instances of their realization over time helps us clearly understand the principles, but doesn’t force us to accept those enactments as precedents that must be followed.

On the other side are those who argue that Christianity is precisely about fidelity to the precedents set by Christ, his apostles, and the apostolic church. The principles of Christianity are not mere abstractions, but specific structures, laws, and actions commanded by Christ that must be upheld in all cultural and historical contexts.

As I look over this short list of both arguments and the ways in which they are deployed, not to mention the actual blogs, Facebook posts, news articles, and public debates between the two sides, I can only conclude that we no longer have dialogue. We have cross-talk. While both sides talk about scripture, tradition, Wesley, God’s providence, discipline, and humanity these words mean different things to them.

The Body of Christ has been through this before. What one might hope is that in the midst of inevitable separation into two different polities (because if we cannot act together we must act apart) we might at least accept one another as Christians, and indeed as Christians bound within the Wesleyan tradition.

April 20, 2017
The Fear Factor in Texas Politics
Next Post

May 4, 2017 INRI - An Insult at the Heart of Christian Symbolism
Recent Comments
0 | Leave a Comment
"Thank you for your opinion. I found it hard to believe the book. I wonder ..."
Anne-Liv Gamlem Face to Face with Jesus (A ..."
"For more on that, see Stephen LeDrew's The Evolution of Atheism.For a brief summary:https://doi.org/10.1016/j.s..."
Joseph Langston Atheism and the New Conditions of ..."
"Late to the party, as usual. Oh well.British historian Callum Brown (2017) attacked Taylor's exposition ..."
Joseph Langston Atheism and the New Conditions of ..."
"but overcoming that ignorance is why I am helping you. https://uploads.disquscdn.c..."
Bishadi The Anti-Semitism in the Heart of ..."
Browse Our Archives
Related posts from Robert Hunt: Interfaith Encounters

The Things That Hurt
In 20 years of ministry, I have never had anyone refuse to...
view all Interfaith blogs
What Are Your Thoughts?leave a comment
Copyright 2008-2021, Patheos. All rights reserved.
Close Ad