INRI – An Insult at the Heart of Christian Symbolism 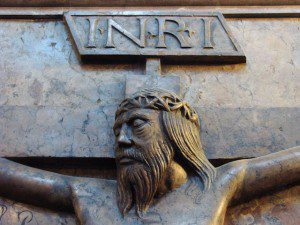 As I turned into a parking lot I saw something on the van in front of me. It was a large sticker we’ve all seen. It had an empty cross draped by a robe. Beneath it were the words “He Has Risen!” On the cross was a placard with the initials, INRI.

The story of the cross with the placard is found in the Gospel of John, Chapter 19. Pilate, the Roman Governor, put a placard on the cross of Jesus that read “Jesus of Nazareth, King of the Jews.” “INRI” are the initials of these words in Latin. There is no question in the context of John 19 that Pilate intended this placard to be an rebuke and insult to the Jewish people.

Read in the context of John’s gospel it appears clear that the gospel writer recounts this story because he intends, perhaps with a tinge of irony, to repeat Pilate’s insult and rebuke. In John’s gospel a Roman put-down becomes a Christian put-down. And in the subsequent history of Christianity, with great consistency, the insult and rebuke was repeated, even embedding itself (where it is found until today) in Christian worship.

Now I doubt the owner of the van ever considered this, although he/she might well affirm with Pilate and John that Jesus is the king of the Jews without considering it an insult.

But it is still a rebuke and an insult. It is a rebuke to tell a people that they have a king whom they do not recognize. It is an insult it says that at best they are ignorant, at worst they are obstinate: claims frequently made against the Jews by Christians.

We Christians, and indeed all religious people, need to become more conscious of the symbols we deploy in our public witness. The cross without the placard would lose none of its meaning, but would lose the intentional insult of the Jewish people. Its time for it to go.

How to Cope with the Post-Summertime Blues
As a young adult growing up in the Northeast, I used to...
view all Interfaith blogs
What Are Your Thoughts?leave a comment
Copyright 2008-2021, Patheos. All rights reserved.
Close Ad