Announcing My New Book: The Essentials of Christian Thought: Seeing Reality through the Biblical Story by Roger E. Olson (Zondervan) 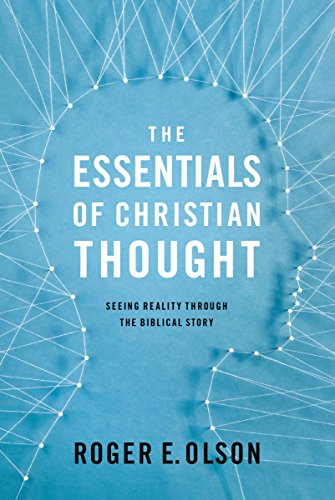 Today I received in the mail two “advance copies” of my latest book entitled The Essentials of Christian Thought: Seeing Reality through the Biblical Story (Zondervan, 2017). Here is what theologian Alister E. McGrath of Oxford University says about it: “Olson offers his readers a timely and powerful defense of a distinctively Christian metaphysics and teases out its implications for theology, apologetics, and cultural dialogue. It is a rich and rewarding read and will do much to reassure its readers of the intellectual credentials of the Christian faith.” Here is what theologian Stanley Hauerwas of Duke University says about it: “Just as war is too important to be left to generals, so philosophy is too important to be left to philosophers. At least philosophy in the hands of a theologian like Roger Olson is too important to be left to philosophers. Though my understanding of philosophy is not the same as Olson’s, I learned much from his stimulating account.”

This book was born out of this blog! Zondervan editor Madison Trammel read something I wrote here about “faith learning integration” and contacted me about writing a book based on what I wrote. I decided this was my opportunity to do several things I had long thought about. I had long wanted to write a book about the “faith” part of “faith-learning integration,” a much misunderstood project that is common to most explicitly Christian institutions of higher learning. I had also long wanted to explore, and then write about, the concept of a “biblical metaphysics.” During the 1950s and 1960s several Jewish and Christian theologians published articles and a few books about that concept but it never really “caught on.” Most people have assumed that “biblical” and “metaphysics” cannot be combined and that “biblical metaphysic” is an oxymoron.

My original title for this work was “Narrative Biblical Metaphysics.” Then, I suggested that as its subtitle. Neither idea “flew” with the publisher. (Who would buy a book with “metaphysics” in the title or subtitle?”) Fine. I’m not a marketer. They know best and I do want the book to sell! So the publisher titled the book The Essentials of Christian Thought with the hope, I suppose, that it will be adopted as a textbook by professors of courses in basic Christian thought. I hope so, too.

But I do want to say that this book is not just a “generic” exposition of traditional Christian thought. Some of the ideas I explore and promote in it are far from traditional. In my opinion, we, Christians, need a “back to the Bible” project that strips away the layered accretions of philosophical theology, much of it borrowed by the church fathers and medieval theologians from Greek thought, and uncovers the implicit metaphysical vision of the Bible itself. In my opinion, as I explain in this book, the Bible is literature; it is primarily narrative. But it contains a kind of “hidden” (in the sense of assumed) metaphysic that is not the same at every point with classical Christian theism.

This book is not written for scholars, although I hope many will appreciate and enjoy it. Some may even learn something from it (as Hauerwas says he did!). This book is written for inquiring Christian minds who are concerned that they may have missed something in their Christian formation or that their (or other Christians’) thinking about ultimate, final reality may be “infected” by non-biblical, non-Christian influences that are antithetical to the Bible’s implicit vision of ultimate reality.

Underlying this book’s surface, it’s barely stated purpose, is to correct widespread Christian syncretism of thought and belief. Many, many Christians’ thoughts about reality are simply a confused mixture of incompatible beliefs drawn from popular culture, folk religion and poor preaching. This book is intended to be a “guide for perplexed Christians”—even ones who do not know they are perplexed!

February 13, 2017
The Main Point of the Christian Doctrine of Sin: We Are All "Damaged Goods"
Next Post

February 18, 2017 Does (Can) the New Testament Church ("Ekklesia") Exist Today?
Recent Comments
0 | Leave a Comment
"I worked very closely with a philosopher who studied philosophy in Japan at a Buddhist ..."
Roger Olson Does God Have His Own Logic?
"I agree with the commenter here (yesterday I think) who argued that celibacy is no ..."
Roger Olson When May Contemporary Christians Diverge from ..."
"Yes, of course I’m not talking here about folk religion and its perceptions of “traditions” ..."
Roger Olson Having Said That…There Are Times When ..."
"That is a poor translation of arsenokotai by which Paul obviously meant more than just ..."
Roger Olson When May Contemporary Christians Diverge from ..."
Browse Our Archives
get the latest from
Roger E. Olson
Sign up for our newsletter
POPULAR AT PATHEOS Evangelical
1

Evangelical
Truth Is Truth--Whatever Its Source May Be (Thoughts...
Roger E. Olson
TRENDING AT PATHEOS Evangelical