Is Texas a Failed State?

Is Texas a Failed State? 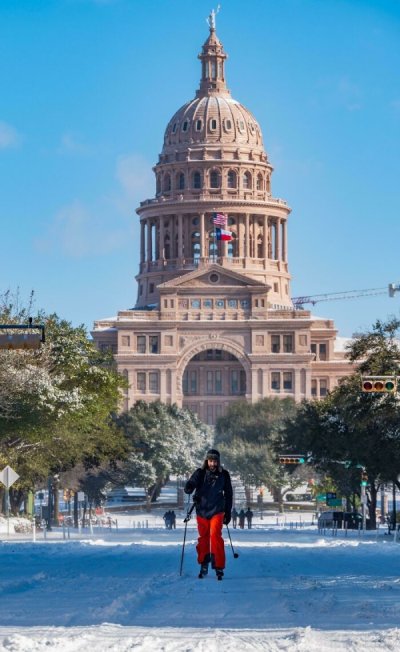 There are many definitions of “failed state” and most of them have to do with nation-states, countries, whose governments, for whatever reasons, are not able to function. According to some geo-political scholars and sources, Somalia is one example. Apparently, there is no central government that governs Somalia.

As a citizen of Texas for a total of 25 years (twice during those years with a hiatus in the middle) I sometimes wonder if Texas has become or is becoming a failed state in a similar but different sense. According to some Texans, Texas could and even should be an independent country as it once was (in the 1840s). But it’s not; it is a state of the union—of the United States of America.

I wonder, however, if it is possible for a state of the union to fail—in a way analogous to a nation-state that fails.

What brought this to my mind? Well, the recent so-called “snowpocalypse” during which a polar vortex descended far into Texas—even as far as Houston near the Gulf Coast. True, it was an extremely unusual weather catastrophe. Only someone who lived through it can really understand it—emotionally and experientially. Statistics and news reports can’t begin to tell it.

My point is that, so it seems, according to numerous news reports, the State of Texas’s government failed its citizens some of whom died—including an eleven year old boy of hypothermia in his own home.

Texas has elected over the years to de-regulate electrical power in the state so that citizens select from many competing supplying companies. But overseeing them all, and overseeing the “power grid” that covers most of the state, is an agency known as ERCOT.

Also, Texas has elected not to upgrade and enhance the power grid to standards that could continue to provide electricity to all citizens during a weather emergency such as the state experienced in February, 2021. That would have required a tax increase. If there is one thing very notable about Texas, it is low taxes. Most Texans are very allergic to taxes and insist on keeping them low. There is no state income tax.

During the snowpocalypse of February, which lasted about a week, millions of Texans were without power or water. ERCOT kept announcing “rolling blackouts” to “save the power grid,” but many neighborhoods were without power for three, four or five days. Temperatures in some places fell to minus one degree Fahrenheit—the coldest temperatures on record in those parts of Texas. Much ice and snow fell and accumulated as never before. The highways, roads, and streets became virtually impassable. It seemed that government came to a virtual standstill.

Who was to blame? Fingers pointed at the board of ERCOT, but what I have wondered is whatever happened to “the buck stops here”—the famous motto of President Harry Truman? Why did the power supply system fail? Why did many power plants shut down? Where were the emergency shelters that could have kept an eleven year old boy and others alive? Why did the “rolling blackouts” not treat all neighborhoods equally? Why did some never lose power while others lost power for five or more days?

It felt like chaos and, looking back on it now, I think it was chaotic. I believe the State of Texas, meaning in this case the state government, failed its citizens—before the catastrophe happened—by not being part of the national power grid (Texans like to be independent and in this case that backfired) and not upgrading and enhancing the power grid within the state. And some are saying that the state government and ERCOT knew what was coming in time to prepare better but failed.

Soon after the chaos of the snowpocalypse, while finger pointing was still going on, the governor of the state went on television to announce a new state initiative—to close down the state mandates about wearing masks (to prevent transmission and infection the COVID virus) and open up restaurants and other businesses to full capacity. Also, he announced a new state initiative to make it illegal for social media companies to exclude or take down “conservative opinions.”

In this writer’s personal opinion, both of these initiatives are ludicrous and evidence a failing state. The COVID pandemic is far, far from over in Texas. There has recently been a decline in hospitalizations, but this is no time to tell people they can now stop wearing masks in public and stop practicing social distancing. One former state governor is reported to have commented that senior citizen of Texas would be willing to die to save the state’s economy.

Texas is a state that prides itself on de-regulating businesses. Social media companies are privately owned businesses. Telling privately owned publishing and communication businesses that they cannot select what articles and letters and comments to publish is completely contrary to the state’s ethos about free enterprise. And how far would this new law extend? Would a privately owned newspaper break the law by not publishing every letter to the editor it receives?

The description of this new law provided by the governor made it sound simply ludicrous; if it passes the state legislature as he described it would very soon be struck down by courts. It is simply and obviously unconstitutional.

Is Texas a failed state? Well, not yet, not completely. But something is very wrong there—especially in state government. Taxes are very low, but what about quality of life? This recent extreme weather catastrophe reveals serious failures in the state’s approach to serving its citizens.

My recommendation is that Texans hold their governor, lieutenant governor (who is almost as powerful as the governor), legislators and office-holders accountable to take care of them by, for example, prosecuting gougers during a natural disaster. Some Texans received power bills in the thousands of dollars for the month of February because of the “snowpocalypse.” There can be little doubt that de-regulation can lead to such enormous problems if not regulated.

But my main question remains: where does the buck stop in Texas when the government fails its people? Apparently not at the governor’s desk. But why not?

March 11, 2021 Congratulations to Beth Moore on Leaving the Southern Baptist Convention!
Recent Comments
0 | Leave a Comment
"Not that I know of. According to legend, a Bishop of Toledo (Spain) long after ..."
Roger Olson Let’s Talk Theology: Questions Invited
"Again, I can’t think of a better one that “The Perfect Family” as expressed (and ..."
Roger Olson Answering a Question about the Trinity: ..."
"So here we have had two entirely different accounts of CRT (yesterday and today). Apparently ..."
Roger Olson Let’s Talk about Critical Race Theory–Theologically
"Suggestions about books to read always raise the question of level of difficulty. Alister McGrath ..."
Roger Olson Answering a Question about the Trinity: ..."
Browse Our Archives
get the latest updates from
Roger E. Olson
and the Patheos
Evangelical
Channel
POPULAR AT PATHEOS Evangelical
1