When Is Division among Christians Justified?

When Is Division among Christians Justified? 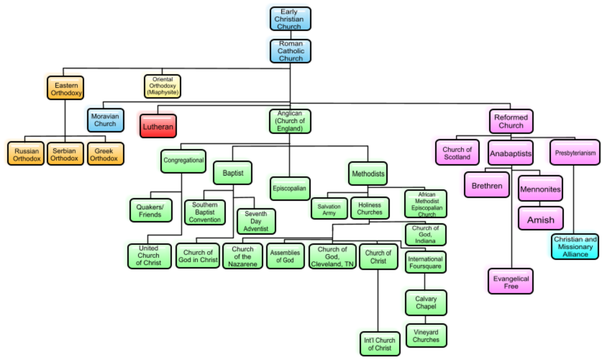 We, American Christians (and I’m sure others) have become used to divisions among Christians. Rarely do we question it. And yet Christ said that he wished for his followers to be one—even as he and the Father are one. Throughout the ages of Christianity visible and institutional unity among Christians have always been an ideal. Rarely has it been realized.

One of the first real schisms among Christians came about in the middle of the second century when followers of the self-proclaimed prophet Montanus established the New Prophecy network of churches—outside of and apart from the bishops who claimed to be successors of the apostles. Who was to blame for the schism is still being debated, but it was a schism, a “break” among Christians. Unless, of course, one wants to say that Montanus and his followers were not Christians.

After that schism or division, separation, there have been too many to count. And I’m not including here (in my own mind or in what I say to you) obviously heretical groups like the various Gnostic sects, the Albigensians, the Cathars, the Polish Brethren, Unitarians, Latter Day Saints, Christian Scientists, et al. (I consider those heretical sects but, of course, they did not and do not consider themselves that. My opinion is shared by most Christian of, for example, the World Council of Churches.)

Let’s be clear about terminology. Nobody thinks they started a “schism” within Christendom. The language of exiles from the Southern Baptist Convention and the so-called “Baptist wars” of the 1980s and 1990s always say “I did not leave the SBC; it left me.” That is what almost all “schismatics” have believed about the churches, denominations, from which they separated or were excommunicated.

There are so many questions surrounding this question (in the title of this blog essay). For example: Is it true that “visible and institutional unity of the church” is the ideal—such that separation and division is always scandalous and a sign of sin? Some groups of Christians believe that their denomination or network (or whatever they call it) is the only group of true Christians or some say they are “Christians only but not the only Christians.” And on and on it goes.

I also think we need to make distinctions here—between dividing, separating, being expelled, and just plain leaving. For example, Martin Luther never intended to divide the church; he was excommunicated. Only then did he start up a separate church that he called “Evangelical” (although most people came to call it “Lutheran”).

When I was growing up Pentecostal/Full Gospel I often heard leaders of our “movement” say that they (or their spiritual ancestors who founded the movement) did not “leave” anything but were expelled from churches and had to start their own, new denominations.

This, I think, is a cause of much misunderstanding—among people who say that divisions among Christians are the faults of those who separated themselves from some formerly existing denomination. More often than not, that is not quite the case—at least not as they see things.

But let’s focus attention on separations, divisions that are conscious, willful and unapologetic. For example, I know of one relatively new Baptist group that consists mostly of ministers and members of a larger, longer-existing Baptist denomination. They organized themselves into a network and left the denomination, taking many churches, almost a whole region, with them—out of and away from their “parent” denomination (convention, conference, whatever). Again, I’m sure they would say “We didn’t leave the denomination; it left us”—meaning the denomination had changed so much that they had to leave it in order to satisfy their consciences.

This has happened hundreds of times in American religious history. The result is at least 250 distinct Christian denominations in the United States—many of them orthodox in most ways but differing from other orthodox Christians over some particular interpretation of the Bible or doctrine or practice not directly related to orthodoxy.

(Here I am using something like the Nicene Creed as the standard of orthodoxy. Many, many denominations say they are “non-creedal” but actually do believe and teach the basic doctrines embedded in that creed. I call those “orthodox.”)

I have made the study of American Christian (orthodox and non-orthodox) denominations a big part of my life. I basically wrote the 14th edition of the Handbook of Denominations in the United States published by Abingdon Press (the United Methodist Publishing House). Receiving that commission was a dream come true. (I want to give credit to previous authors and editors of the Handbook; I built on their work while re-writing most of it.)

Among orthodox denominations in America I can distinguish between three kinds—as to their separate origins. First, there are those whose origins are somewhat shrouded in mystery or at least strongly debated. Some of these claim to be the “original” and “true” Christian church. They can make a somewhat justified claim that they never separated from anyone or anything but all others separated from them. Among these would be Eastern Orthodox (canonical) and Roman Catholic.

Second, there are those whose origins we know and they began when their founders were expelled or excommunicated by their “parent” churches/denominations over some relatively minor disagreement about doctrine or practice. By “relatively minor” I mean “in the overall scheme of orthodoxy.” Of course, these groups do not consider their reasons for being expelled “minor.” I mentioned earlier Pentecostals. Nobody that I know ever set out to establish a Pentecostal denomination; all of them grew out of perception of being excluded by their parent denominations because they did not agree with the emphasis on speaking in tongues, etc. I could name both—the parent denominations and the Pentecostal denominations that grew out of them by expulsion of the latters’ founders.

Third, there are those whose origins we know and they began when their founders consciously, willfully, broke away from their parent denominations over perceived real differences of doctrine and practice. These are the ones often labeled “schisms.” When I interview their leaders, however, they always point to their perception that the denomination they left, taking ministers and members with them, had wandered away from their true foundations and had changed so radically that a restoration of the denomination’s roots was needed. These people always say “We are the true…” even though organizationally they are newer. An example would be the Presbyterian Church of America which was, at its founding, made up of minister and members of the United Presbyterian Church. Many of these separated churches left their denominations at the point of or shortly after a merger with which they were not happy. For example, the United Methodist Church is a merger of two previously existing denominations—the Methodist Episcopal Church and the Evangelical United Brethren. Many EUB churches did not want to join the merger and stepped out and started their own separate denomination that they considered the true EUB denomination (but with a separate name).

So what is my point here? ONLY that I think people need to be cautious about assigning blame when churches divide, separate, leave. “Schismatic’ is a pejorative term and nobody likes it—of themselves. Almost always, new churches, denominations say one of two things to justify their separate existence: 1) We didn’t leave, our denomination left us; or 2) Our denomination changed so radically that we could no longer stay with it. Whether that is true or not, is always a matter of perspective.

So, to illustrate, I am a proud member of a Baptist church that was sometime in the past a chartered member of the Southern Baptist Convention. I don’t know exactly when it left the SBC or how but I’m sure a “nail in the coffin” or “straw on the camel’s back” was the 2000 SBC revision of the Baptist Faith and Message. Already in place was the 1963 BFM. Many SBC churches, like my own, felt that the revision was wrong. I won’t go into all the reasons but only say that I agree that it was wrong. The changes were a mistake. My church joined a group of former SBC churches called the Cooperative Baptist Fellowship (CBF) and has always belonged to the Baptist General Convention of Texas (BGCT) which holds firmly to the 1963 BFM. Is my church “schismatic?” I don’t think so. The SBC changed. My church is more like the SBC of the past than of the present.

All this is leading up to one major issue facing most mainline Protestant denominations now. Is the issue of ordination of practicing homosexuals and gay marriage (the two almost always go together) significant enough to justify division? As I look at this, what I think is that the real, underlying issue is not the one on the surface that everyone talks about. It’s a long-simmering issue of theology. For most who identify this issue as justified cause for division, it is simply the most recent (and crucial) evidence of their denomination’s long-time deviation from orthodoxy—usually allowing non-orthodox, truly liberal, basically unitarian ministers to pastor churches. Most of those arguing that the time has come for these denominations to divide over the issues of ordination of practicing homosexuals and gay marriage will argue that this is just the straw that breaks the proverbial camel’s back. They have long been dissatisfied with the theological pluralism within their denominations.