Memory Can Be a Burden: Remembering Past Invasions

Problems with Remembering Too Much: Reflections on Current Events in Light of Past Ones 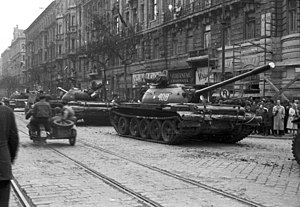 My family and friends sometimes tell me that I have an unusually clear and detailed memory of the distant past. My childhood, for example. But also many national and world events. Also old television shows from the 1950s such as “Father Knows Best” (my stepmother’s favorite) and “Rawhide” (my father’s favorite). The latter television series starred, among others, a very young Clint Eastwood.

(Sidebar: I am often amused when I hear or read feminists bashing “Father Knows Best” as an example of 1950s patriarchy because in the show the father, played by Robert Young, was often wrong and had to admit it and humbly apologize to his wife and/or daughters and/or son!)

One problem with remembering so much from so long ago is that I often think, when observing events in the world or watching a television show, “I saw something just like that a long time ago” and the “long time ago” was often in the 1950s or 1960s. Most people either were not yet alive or have forgotten those events and television shows.

(Here I am only using “television shows” as an example; I remember much else from the 1950s and 1960s that I suspect most people know little or nothing about.)

I will often be watching a television show or movie on television and say, much to my wife’s chagrin, “That’s based on an episode of…” referring back to a very old television program or movie. It seems to me, sometimes, that writers of television programs and movies rely very heavily on old memes and plots and events.

Just to give two rather strange examples that jump to mind. Some years ago I met the author of a book about modern cultural intellectual “heroes” and how they, even though secular, had good things to teach evangelical Christians. (I’m not going to name the book or the author as I don’t intend to embarrass him publicly.) Halfway through the book I realized that I was pretty much re-reading a much older book with a different title. I’m not accusing the author of plagiarism; I’m just saying he probably should have given the older book, written by one of his seminary professors many years before, some credit. He didn’t. I asked the author if he studied with that seminary professor and he enthusiastically answered yes and went on to say how much he learned from him. I said, well what about your book and his (I named the seminary professor’s book which was long out of print and probably was not read by many people because of the strange title). He looked shocked that I would know about that earlier book and sheepishly turned and walked quickly away from me.

A very well-known, highly regarded church historian, known for his books and eloquent talks at numerous Christian (and other) institutions, frequently said “The past is a foreign country; they do things differently there.” I immediately recognized that as the first line of the English novel The Go-Between published many years before. He never gave credit to the novel or its author for that witty saying, leaving the impression that he coined it. I never had the opportunity of asking him about that.

I doubt that very many people remembered that book or that first line of the other book. I remember too much.

This also means that I know too much. And that makes conversations sometimes difficult. I hear conversations about something, a world or national event or popular culture artifact, and immediately think of its earlier example.

Ever since the Russian invasion of Ukraine I have been wondering how many people remember the Soviet Union’s invasion of Hungary in 1956? I remember it. My parents went out and rented a small black and white television so that we and friends and neighbors could watch it unfold. I was a very young child, but I remember a living room crowded with people watching hours of news reports on CBS, NBC, and ABC about the Russian tanks rolling into Budapest and other Hungarian cities. I remember that one such tank even ran over a car on a city street. I saw recently on television news—the same event repeated in Ukraine! Yet I have not heard any of the news “talking heads” mentioning the parallels between Russia’s invasion of Hungary in 1956 and its invasion of Ukraine now, in 2022. I suspect the reasons for the two invasions are much the same. One difference, however, is that Russia met very little military resistance from Hungary while it is meeting stiff military (and other) resistance in Ukraine.

I remember American evangelical Christianity as it was in the 1950s and 1960s and beyond and I see now both parallels and stark differences. There were then extremely popular evangelists who cast spells over evangelical audiences around the U.S. and the world. All but Billy Graham are now forgotten. Most, not all, of them were Pentecostals, “healing evangelists.” The media call them “faith healers,” but I do not remember any of them using that label. We certainly never used that label. Some of them rented large auditoriums in cities and their “crusades” drew thousands of people. Today they are forgotten while newer examples of the same phenomenon are closely examined by the media and are virtually household names.

Evangelicals were by and large quiet about politics until John F. Kennedy ran for president and was elected. It was that event that catapulted American evangelicals out of quietism about politics and woke up a (politically) sleeping religious giant to eventually become a political force to be reckoned with. Some evangelical anti-communist preachers were nationally recognized public figures such as Billy James Hargis. Who remembers Hargis? On the other side of the political fence, but also an evangelical, was Harold Stassen who ran for president numerous times (without ever being nominated by his Republican Party). Stassen was a wunderkind in his day in the 1950s and beyond, but he has now been almost completely forgotten. He was a rare example of a liberal Republican!

I am watching the Russian invasion of Ukraine with deep emotion, some fear, and profound disgust. However, at the same time, I am remembering Russia’s earlier invasions of Hungary, Czechoslovakia, Afghanistan, Chechnya, and Georgia. The “Russian Bear” seems to believe it has the right to subdue and dominate any country on its borders, especially if that country is considered within its “sphere of influence” in modern geo-politics.

However, as I have said here before, I cannot forget that we, the U.S.A., have done exactly the same many times in the past, sometimes using our own military to conquer and subdue and sometimes using covert actions such as mercenary militias like the “Contras” in Nicaragua during Ronald Reagan’s presidency in the 1980s. I well remember the “Bay of Pigs” invasion and fiasco during Kennedy’s presidency. Cuba was an independent nation state and we, the U.S.A., funded and trained a group of Cuban mercenaries to invade it with the intention of overthrowing Fidel Castro and his gang of revolutionaries. To the rest of the world, this was nothing less than illegal American imperialism and hardly different, except in scope and success (it was quickly routed by Castro), from Russia’s invasion of Ukraine. Both were and are illegal and imperialistic. Our reason for invading Cuba (using U.S. trained mercenaries) and the Dominican Republic and Granada and Nicaragua and many other countries in our “sphere of influence” was virtually the same as Putin’s in invading Ukraine—to keep those countries from falling into the sphere of influence of a perceived enemy. In every case, the public reason given for the invasion was to keep communism from gaining a foothold in our sphere of influence, to prevent “another Cuba” from happening near our shores. But we did the same before communism, with Mexico, with Canada (the War of 1812), with Colombia (we created Panama out of Colombia in order to build the canal).

None of that means we should ignore Putin’s illegal invasion of Ukraine, but we should keep it in perspective—as not unique and as like our own military (and other, similar) adventures in countries near us and around the world (for example Vietnam, Laos, and Iraq). We think we did right in most, if not all of those invasions. Putin and most Russians think he is doing right. We don’t have to think he is doing right just because we have done wrong, but we should at least remember what we have done and face into the future with integrity—never doing wrong again.