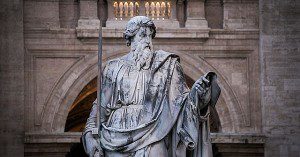 *Note to would-be commenters: This is not a discussion board where “anything goes.” I moderate it and do not read all of or post comments that are rude, argumentative, or hostile. This is a place for calm, reasonable discussion of my opinions. Do not misuse it to promote your own alternative opinions. Do not include any links or photos. If you comment, keep it brief (no more than 100 words). Be kind.*

I held a chair of Christian ethics for many years—at a major American university. I studied philosophical ethics as well as religious ethics during my Ph.D. Studies at Rice University. I have long been interested in the subject of “justice.” There seems to be little consensus among philosophers or theologians about the meaning of justice.

I recently attended a theological conference at which the main speaker argued that there are two main approaches to justice—“retributive” and “consequentialist.” He argued against consequentialism and for retributivism. One of his reasons was that when consequentialism dominated theories of justice, women received longer jail and prison terms than men because it was generally believed that women could be reformed more easily than men. I did not understand that claim or believe it, but I did not have opportunity to ask him about it.

This distinction seems to me only applicable to the criminal justice system. What, I asked myself, about distributive justice which is justice within the economic system?

It seems to me a distinction in defining justice must be made between these two spheres—criminal justice and economic justice. Many ethicists would argue, and I agree, that restorative justice is applicable to both.

I believe that God’s justice is always restorative; God (who we know character-wise through Jesus Christ) seeks to restore sinners as much as possible. What is possible depends on their desire to be forgiven and reformed.

Simply to talk about “justice” in two modes—as either retributive or consequentialist—is too simplistic. And I believe that in the criminal justice system BOTH can be applied. A person who is reformable should be reformed—if possible. A person who is not likely to be reformed should be kept out of society as much as possible (for as long as possible). This is consequentialism (restorative justice) with a component of retributive justice. Even a person who is fully reformed may need to be punished for the good of society—to demonstrate that crimes of passion, for example, are not acceptable.

Most people hear “justice” and immediately think of Aristotle’s definition (although they probably don’t know it was Aristotle’s) which is (paraphrasing) giving to each person what he or she deserves. But that is extremely overly simplistic. It raises more questions than it answers. (And yes, I know that Aristotle attempted to answer many of those questions! My point is that most people don’t know about that and think “to each what he or she deserves” suffices as a definition of justice.)

What I said above about God and justice is why I agree with C. S. Lewis in The Great Divorce that hell is God’s “painful refuge” provided for those who refuse his forgiveness and restorative grace. I cannot answer all questions such as “Might it be possible for a person in hell to leave and go to heaven?” Lewis apparently thought it was possible.

Now, I ask readers to think. What about the cross, the atoning death of Jesus Christ on the cross? Doesn’t substitutionary atonement (which I have defended here) necessarily mean it was an act of retributive justice? Well, yes and no. Retribution is deserved by us, but the substitutionary death of Jesus Christ (who was and is God) turned aside retribution by (God) meting it out on himself so that restorative justice could be applied. All people are potentially restored to fellowship with God by the death of Jesus Christ on the cross. That is what motivated God to go to the cross for us. However, restorative justice is not applied if someone refuses it and insists on suffering retributive justice instead. That is apparently, very ironically and sadly, what many do — according to scripture, Christian tradition, and experience.

Now, what about economic restorative justice? I believe the ideal Christian economic system would be one without differentiating wealth. That is what the kingdom of heaven in the future will be. However, here on earth, here and now, that is not feasible. So I rely on the middle axiom provided by John Rawls of justice (in the economic system) as “fairness.” I have explained that here several times. It is the economic system that all people would choose under the “veil of ignorance” and its basic principle is maximizing the minimum without abolishing incentives to gain wealth. When the rich become richer, the poor also gain in economic status insofar as they want to participate in the economic system.

March 11, 2022
Got Miracles? Some Theological Thoughts about Miracles
Next Post