Why I Wrote “Against Liberal Theology”

Why I Wrote “Against Liberal Theology” 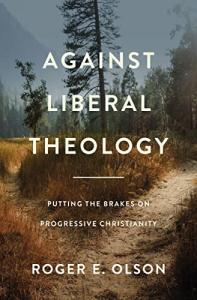 *Note to would-be commenters: This is not a discussion board; it is a moderated blog the main purpose of which is for me to share my opinions. The secondary purpose is to engage in constructive dialogue with readers about the subjects of my blog posts. If you hope your comment will appear here, make sure it is relatively brief, on topic, addressed to me, civil and respectful, not hostile or argumentative, and contains no links or photos.*

Just as when I published “Against Calvinism” (Zondervan) people are criticizing “Against Liberal Theology” (Zondervan, June 7, 2022). Apparently it is considered gauche to be against anything. I respectfully disagree. We are all against something.

One of my main reasons for writing the book is that most conservative Christians don’t know what real, true liberal Christian theology really is. They often throw the label “liberal” around without any knowledge of real, true liberal Christian theology. I taught in a Baptist college and seminary (now a university) and in a Baptist university and seminary for many years and encountered many people who called both “liberal” theologically. They were using the adjective wrongly. To them it just meant there were new (to them) ideas appearing with which they did not agree. For example, in both institutions women in ministry was encouraged. That is not liberal theology or a sign of it. In both institutions open theism was being taught. That is not liberal theology. Most of the critics who threw the “liberal” canard at both institutions were fundamentalists for whom anything other than fundamentalism is liberal. In “Against Liberal Theology” I show what liberal Christian theology really is.

I also wrote the book to show self-styled “progressive Christians” where the path they are on might lead if they are not careful. Most of them are young and disenchanted with fundamentalism and are moving quickly toward liberal theology as if it is the only alternative to fundamentalism. It isn’t.

Finally, I wrote the book because true liberal theology has ruined the mainline Protestant denominations in the United States. There is no real life in it and it is not real Christianity at all. As I demonstrate in the book, real, true liberal theologians have cut the cord of continuity between their beliefs (or unbeliefs) and biblical, historical, classical Christianity so thoroughly that what they teach is unrecognizable as that.

Some have argued that I should have written “Against Fundamentalism” and I may yet do that. But there are some problems. The literature is thin. My direct experience of real, true fundamentalism is thinner than my direct experience of real, true liberal theology. And, to be perfectly blunt but honest, in my opinion, fundamentalist literature is not respectable in the way real, true liberal theological literature is. There exists a great tradition of liberal Christianity that includes profound, even if profoundly wrong, great literature. One example is liberal theologian Douglas Ottati’s books especially “Theology for the Twenty-first Century” (Eerdmans) which I reviewed here. I know of no volume of fundamentalist theology that even compares with that.

Fuller Seminary president E. J. Carnell famously described fundamentalism as “orthodoxy gone cultic.” That’s it; that’s fundamentalism. What else is there to say about it? Real, true Christian fundamentalism is simply not a worthy opponent as strong as it is in America today (and for the past century). Liberal theology is a worthy opponent, something to take seriously even if I have to reject it as wrong.

What you will find in “Against Liberal Theology” is numerous quotes from real, true, self-identified liberal Protestant theologians. I avoid quoting from theologians who never identified as liberal unless Gary Dorrien (THE expert and scholar of the tradition of liberal theology in America) identifies the person as liberal and I am convinced he or she would agree with that identification.

During my many years of teaching Christian theology in four universities I saw many mostly young postfundamentalist Christians calling themselves “progressive Christians” heading straight toward and eventually landing in liberal Christianity. I sadly had to conclude they had actually given up on Christianity except in name because they no longer believed in the ontological deity of Jesus Christ and/or no longer believed in the bodily resurrection of Jesus Christ and/or no longer believed God has acted supernaturally in the world at all. Many of them came to embrace process theology, perhaps the main “flavor” of liberal theology in America today. Very often they ended up (by the time I lost touch with them) throwing out doctrine entirely and reducing their Christianity to social ethics and spiritual formation. A strong clue to their wrong journey was and is the common saying among them that “I don’t care what Paul said; I follow Jesus.”

One whole denomination that I belonged to for twenty-two years began as a reaction to fundamentalism but was orthodox and evangelical when it began. By the time I left (moved away) I believed it was rushing headlong through “progressive Christianity” into liberal theology—not officially but unofficially by harboring leading pastors and executives who seemed to me unconcerned with keeping alive the original vision of the evangelical founders.

I wrote “Against Liberal Theology” because, with liberal theologian Gary Dorrien, I became convinced that liberal theology is alive and well even if the mainline Protestant denominations dominated by it continue to dwindle in membership and vitality. And I became convinced that the huge debates over gay marriage and LGBTQ inclusion were simply distractions from the real issue in those denominations which is and has long been toleration of liberal theology in the top ranks if not among the laity in the pews.