The American Myth That “It Can’t Happen Here”

The American Myth That “It Can’t Happen Here” 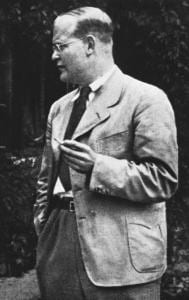 (This is a picture of anti-fascist Christian theologian Dietrich Bonhoeffer who recognized the danger of Hitler and the Nazi Party and bravely spoke out against them. He helped organize the “Confessing Church” in Germany but became disillusioned when many of its pastors would not join him in condemning fascism and Naziism.)

*Note: If you choose to comment, make sure your comment is relatively brief (no more than 100 words), on topic, addressed to me, civil and respectful (not hostile or argumentative), and devoid of photos or links. Also know that I do not allow comments that are really just commenters’ attempts to misuse my blog to promote their own alternative views. This is not a discussion board; it is a safe place for evangelical Christians (broadly defined) to discuss issues and ideas that I raise in my blog posts. Others are welcome to ask to learn.*

In 1935 acclaimed American writer Sinclair Lewis’s novel “It Can’t Happen Here” was published. The novel described a fascist takeover of America, not from outside but from within. 1935 was a time when many Americans inclined toward communism or fascism. Lewis believed that the greater danger to American democracy was fascism. Many Americans then and now believe that “it can’t happen here.” What is the “it?” The “it” refers to an American dictatorship including all that is implied by that term—totalitarianism, persecution of dissidents, the canceling of freedoms of speech, etc., etc. Lewis wanted Americans to see through his eyes, by reading the book, how easily it could happen “here” and what it would be like.

Throughout my lifetime, since the 1950s, I have heard many of my fellow Americans say something LIKE “It can’t happen here.” They believe that America is somehow immune to a fascist dictatorship. Most of them that I have known believed that a communist takeover of America could happen and many of them lived in fear of such. I believe that most Americans from the 1930s to today are blind to the possibility of an American fascist dictatorship.

”Fascism,” of course, is an essentially contested concept. For its definition I rely on scholars who have studied fascist regimes and societies beginning with Mussolini’s takeover of Italy (“the march on Rome”) in 1922. The term “fascism” originates from Mussolini’s political movement that promised to make the Italian trains run on time. The term “fascism,” then has generally been used by political science scholars to label any political movement or government that is somewhat LIKE Mussolini’s—including Hitler’s. Hitler admired Mussolini and was influenced by him. However, not all fascist movements or governments have been as extreme as the Nazi one. All, however, have been totalitarian in the sense of the government using its power to suppress dissent together with very close ties between the government and corporations. “Fascism” cannot be applied to communist movements or regimes; it does not include public OWNERSHIP of the means of production, but it usually does include government control of the economy and everything else.

Like almost everything of the kind, fascism comes with different faces, but all of them share certain commonalities described by political scientists. But, rather than describe those commonalities in detail here, I will name fascist societies of the 20th century into the 21st century. “Fascism” is hard to define, but, like pornography, as described by an American Supreme Court judge, can be known when seen — meaning through “eyes” that are educated, in this sense, by political science (broadly defined).

There are two things that all fascists hate: communism (and anything resembling it) and social anarchy (failed governments due to pluralism run rampant). Of course, many fascists hate other things as well, including ethnic groups, dissidents, other countries, etc.)

Fascism usually arises in a social situation of crisis, chaos, fear, division. Usually, perhaps always, a “strongman” (could be a strong woman) arises with a promise to bring order out of impending or actual chaos and possible anarchy. The promise includes, although this is not always announced, a plan to impose one party rule, silence trouble-makers, control the press, and restore order by force (e.g., martial law). A signal sign of rising fascism in a society is violence against the perceived enemies of the fascist movement and its leader. Often, the fascist leader-to-be claims not to support the violence, but usually it is done in his (or her) name or the “name” of the movement.

Because many fascist regimes have been aligned closely with religious organizations (e.g., Franco), many Christians have wrongly assumed that fascist governments allow more freedom of religion than, say, communist governments. In most, if not all, cases, however, true fascist regimes have sought with heavy-handed tactics to control churches and other religious institutions. Often, leaders of one religious organization have rushed to be “cozy” with the fascist movement and its leader, to the detriment of perceived competing religious movements and organizations. For example, in the 1930s in Germany the Catholic Church signed a concordat with Hitler that made it less likely that the Nazi government would control the Catholic Church. Protestants did not do the same, so Hitler took over the state-supported Protestant churches (mostly Lutheran but some Reformed as well).

Yes, I know, many Catholic priests were put in concentration camps by Hitler and his cronies, but that was not because they were Catholic but because they chose to speak out against the Nazi party and government.

Almost all, if not all, fascist movements and regimes have been fed by the fuel of “populism”—the idea that the country is being controlled by an elite group of people who manipulate everything to the detriment of “ordinary people.” Fascists usually promise, in one way or another, to satisfy the populists by cleansing the country of the supposed elitists who are ignoring or abusing “ordinary working people.” However, as it turns out, usually, fascists who come to power link up with corporate leaders against workers (abolishing unions) and point the populists to “intellectuals” as the true enemies.

Well, enough description of fascism. My point is that I believe “It can’t happen here” is a popular American myth about fascism, even though many people who say that don’t specifically identify the “it” as fascism. Upon close examination of what they really mean by “it” it turns out that they mean something like fascism. Many of them turn out not really to be all that opposed to fascism—if our society falls into a “failed democracy” and/or if our society continues on the path toward total pluralism where there is no ideology that holds our society together.

I believe that “January 6” was a turning point in American political and social life that raises the fear of fascism among us to a very realistic one. In most cases where fascism came to power, it was not believed to be possible by the majority of people. For example, Italy was a monarchy before that throughout the Mussolini era. Monarchists believe the king could and would reign in Mussolini. He did not—until it was absolutely clear that Italy had lost the war.

Unfortunately, today, in 2022, many conservative Christians, especially evangelical/fundamentalist Protestants, lean into fascism without knowing it. They need strong evangelical voices to speak out to them that fascism is a form of idolatry and that they need to be just as wary of fascism as of communism.