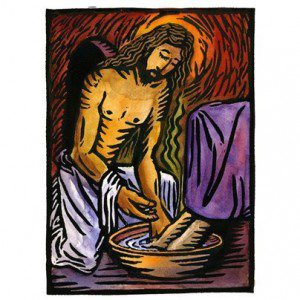 The title may’ve grabbed your attention.

Unless you’ve got a foot fetish, it’s probably because of the third thing mentioned in it.

Let’s face it, Maundy Thursday is the least known about, most intimate, and least attended, of the Christian holy days.

The season of Lent begins with Ash Wednesday and then wraps up with “holy week” – which is comprised of Maundy Thursday, Good Friday, the great culmination of the celebration of Jesus’ resurrection known as Easter.

Most people have heard of Good Friday and Easter – the later two days of the Paschal Triduum. A lot of folks haven’t heard about their unwanted kid brother. “Maundy Thursday” comes from “mandatum novum” meaning “new commandment” referring to the 13th chapter in the Gospel called John, which describes Jesus hosting a meal for his disciples (the “last supper”) after his “triumphal entry” into Jerusalem. It describes how in the middle of that meal, Jesus got up from the table, wrapped a towel around his waist, and then started washing the feet of his disciples and commences with his ordering the “new mandate” to “love one another.” 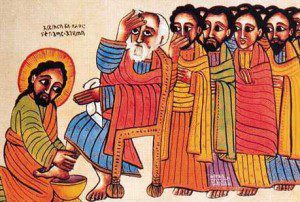 (the disciple in this depiction seems to be holding up his hand in protest saying, “No, really! I’d rather you didn’t do this! Oh? You’re actually doing it?” Face to palm. “Oy vey.”)

While many of us may be a bit wary of having others touch our feet (and while I’ve heard of churches where they offer to wash people’s hands instead of their feet – seems more civilized and less off-putting), it seems to me that washing the feet of modern people who live in developed countries isn’t anywhere near as profound or impactful as what those early followers of Jesus experienced. I’d like to propose that a powerful way for churches to convey the true potency of Maundy Thursday – and the radical truth it seeks to convey– would be to have people bring in their laptop computers and other e-vices and then have some trained computer geeks remove all of the pornography (or gossip, hate-full rants, etc) that’s on too many people’s computers – even down to scrubbing all the cookies and traces of past visits to various websites. 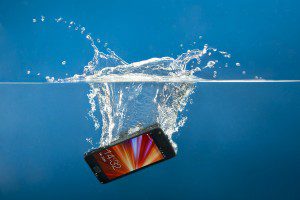 I’m not prudish or anti-erotica all together, but working in campus ministry as I do, I’m aware of the massive amount of addiction and shame that many people find themselves caught up in (men and women).

Does the idea of such a “ritual” repel you? Is that the last thing you’d want people in the Church to do for you?

…. now you’re getting the idea.

Jesus loves us unconditionally, just as we are. We’re called to love ourselves and others that way too. Indeed, we’re commanded to. Those are our marching orders.

I close with a poem.

a retreaded tire that’s got dryrot on the side walls — and i’m underinflated.
you can see the wear-bars and most of the belts.

my hair is thinning , my metabolism is slow, i’ve got warts on a toe,
i fart too much, and i spend too much time on facebook.

my eyebrows are disappearing and the ones that aren’t are growing wild like a mutant russian grampa’s.

i have no tact, i’m a reckless bull in a china shop, and i run rough shod over others

i also defer to others too much and don’t stand up for myself when i should.

i walked across the street when i saw those black guys approaching and thought that other black man who wanted to talk to me about music was a beggar just because he was sitting on that curb in chicago … and because he was black.

i father a kid… but he’s really raising himself.

i’m just another divorced dude that’s had a long string of girlfriends… and none of them have been able to love me fully – so how can God?

i’m the kid who was laying in the stench of my own vomit on the floor of the bathroom in the dorm this morning.

i’m the guy that laced that girl’s drink last night… cuz it might help me get lucky.

i’m the woman that just got dumped and is holed up in my apartment for days eating ben & jerry’s.

i’m the boss who’s harassing the secretaries because they’re so darned cute… and because i can.

i stick my fingers down my throat because … well you wouldn’t understand.

i cut my wrists because at least that pain is real and it lets me know i’m alive.

i had an abortion — and it made sense — but i’m afraid to tell anyone.

i shot someone in iraq – and i knew they weren’t a combatant.

i smoke and drive my motorcycle too fast – because i’m not sure i want to live.

i drink when no one is around… because it helps me forget.

i judge people when they talk too fast ….  or too slow.

i can’t stand bullies. they suck and i hate them.

and i criticize in others what i struggle with most myself

sure my dog loves me… yet how can God?

what if he can?

what if God is love?

what if he can love me like the father i never had?

what if she can love me like the mother who wasn’t perfect?

what if God sees the shit on my feet and actually wants to touch them, 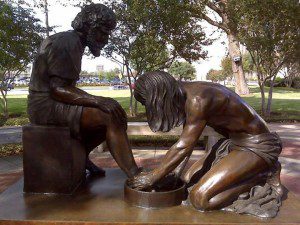 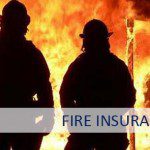 April 15, 2015 Jesus is/isn't the only way. - "They can't all be true" - except when they are.
Recent Comments
0 | Leave a Comment
"And it should also be mentioned that his grandmother‘s name was Elizabeth Christ Trump. She ..."
Roger Wolsey Donald Trump is The Highlander?
"See also this powerful six minute video clip. Testimony of a military veteran about the ..."
Roger Wolsey Why America isn’t a Christian Nation.
""Instead of presenting God as a dictator or monarch who calls the shots, panentheism understands ..."
BrotherRog Groovin’ With God – beatnik process ..."
"The Church is not in any danger of dying. Matthew 16:18And I tell you, you ..."
Bob Shiloh 10 Ways Churches Could Bring Us ..."
Browse Our Archives
Related posts from The Holy Kiss