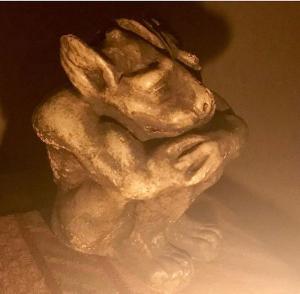 I recently participated in a two hour experiential gathering that was advertised in the town I live in aimed at helping people deal with some important parts of life. The title of the event, “Expressing Grief, Honoring Truth, Reigniting the Heart,” and the description of it – “Join us for this gathering that is open to the whole community and continues our exploration of a transformational response to the harm revealed by the MeToo movement” – were both specific and vague enough to pique the curiosity of about 15 of my fellow citizens. Curiously, it was mostly men who showed up for what was being offered.

The event page on Facebook stated that it would be “Facilitated by grief counselor Robyn Hubbard and body-centered coach and dance facilitator Hannah Kinderleher, this grief ritual will include movement, art, and community building and move us through a complete cycle of resourcing, releasing, and renew.” Only 4 of the 15 attendees were women. That so many men would show up to something that is overtly centered around “the body,” and that would involve “movement, art, and ritual” – was perhaps a bit surprising. I would’ve guessed the numbers would have been reversed.

Here’s a link to the even fuller description that I doubt if many of us bothered to open or read.  My hunch is that many men are like me and we tend to read the headlines, but not frequently bother with the small print. We tend to read the directions enclosed in packages – only as a last resort, if we really have to ; ). If true, that most of us pretty much just read and responded to the title of the event, then what was speaking to us was an opportunity to express grief, honor truth, and/or reignite our hearts. There’s a lot of men yearning for outlets to feel our feelings and to get out of our heads and shift into our hearts. We know we’d do well to feel and express our feelings more, but we need help to do those things.

A few years ago, I attended an all-day workshop for men to help process and deal with grief. I was moved by that experience – and even wrote a poem about it – but to be honest, I employed some poetic license and overstated things. Most of the men who showed up to that event held back our feelings and we didn’t really do much obvious grieving – at least not in front of each other on the carpet “when we were supposed to.” My guess is that most of us did our grieving, and crying, in private during the portion of that workshop where we were free to roam the rugged land away from the building we were gathering in. I did most of my crying, in fact all of it, near a waterfall at a stream. I sensed that the sounds of that waterfall would cover my weeping and wailing.

When we gathered back to the yurt where the facilitators had us sitting around a large carpet on the floor, we found ourselves bathed in drumming and didgeriodoo music… which was supposed to help us find safe space to cry. Thing is, very few of us cried on that carpet. The two leaders made some moaning sounds to try to prime the pump, and a few of us threw in a few obligatory yelps here and there – but they were forced and done mostly to make the facilitators feel good (my take on it).

And yet, at this recent gathering that I attended, things were notably different. While only a 2 hour experience (as opposed to 6), the event was done in a more holistic way. Instead of focusing on helping men cry, as if that were what grief was all about, we began with opportunities for each of us begin with thinking about how we are Resourced in life, what strengths we draw upon. We wandered around the room, freely moving and making sounds as we felt moved to accompanied by music in the background, and occasionally visited a table where we could artistically express a bit with pens on large sheets of paper. From there, we had a chance to Release – yes to make sounds and body movements that ultimately led most all of us actually weeping and wailing and moaning and groaning freely and loudly. And then, from there we were invited to ponder how we see signs of Renewal – and new life in our lives – in any way whatsoever. And, then we finished by considering where we feel that we are Returning to our power, to our best selves, in life, and what it might mean to embrace that even more – what really being at our finest most glorious might look like for each of us.

To break it down, at the start of each of these 4 pieces, we were invited to listen to some music, walk and move about the space with the respective theme/piece in mind, begin to move as we felt like it, feel that theme/piece in ourselves, really move to it, and embrace it, and let it move through us. And we were also invited to go to draw with some colored pens on some large sheets of paper keyed to each of those four themes/pieces – to draw out symbols or images that speak to those respective parts of ourselves. We could move for a while, perhaps dance, stomp, make sounds, make art, and flow in and out of all of it.

While only 15 minutes was focused on “Release” – we did a LOT of crying, a lot of moaning, a lot of groaning, a lot of shaking, and beating our chests, pounding fists on the floor, and mostly – crying. I heard men sobbing like I’d never heard it before. 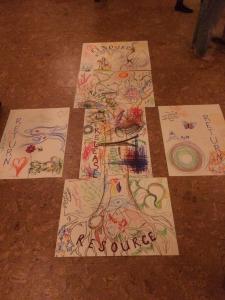 I’ve been pondering how it is that more men, including myself, felt so free to let out our feelings and tears in this shorter event compared to the longer one I took part in a few years ago. And here’s what I think it comes down to. If you get a few typical men to try to help other men have better sex, the focus may well end up being all about helping men have better erections or orgasms, or helping them to ensure that the lovers in their lives have better orgasms. Yet, if we focus on that one thing, it can make that one thing not show up at all – because of the pressure we put on ourselves to attain “the big O.” Similarly, if you get typical few typical men to try to help other men to grieve, feel, and cry – ..if there is a sense that there is pressure and expectation to cry.. that *that’s what it’s about*. – it may end up inhibiting that all together.

In contrast, this shorter event was facilitated by a team of two women and a man and it provided a container that was more holistic that made it clear that crying wasn’t the climax or point of this experience. It was simply treated just one phase – the second of four. So, in a way, going back to the sex workshop analogy, we experienced flirtation, courting, wining/dining, along with an opportunity to make love physically – but without any sort of felt sense of expectation or pressure; and also after sex cuddling and enjoying, etc.. We trusted the process and allowed ourselves to shift from phase to phase and receive the goodness that each phase/piece might bring us. In fact, having the Release phase be the 2nd of the 4 phases (as opposed to being last) really helped convey that crying wasn’t the focus or point of the event. I truly think that our feeling it this way is what allowed that Release portion to be so very powerful for us. 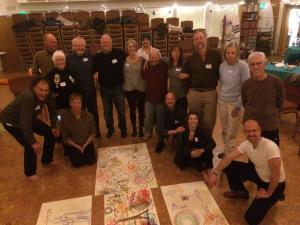 I offer these observations, thoughts, and reflections to help those who seek to help men in Western culture tap into their emotions and feel more comfortable sharing, conveying, and releasing them.

** What do you all make of this? Particularly men, what kinds of containers or circumstances have helped you to feel your feelings? – Particularly feelings of sadness, and grief? What do you make of the possible insights that I think I have around comparing these two experiences that I had? Does it resonate with you?

Blessings to us all as we feel our way through the very real struggles, demands, and challenges of life. 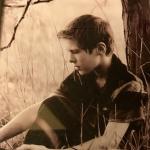 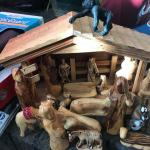 Progressive Christian
Authentically Christian. Getting real to help our Culture.
The Holy Kiss 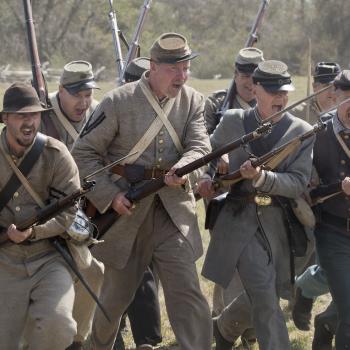