The Bathwater AND the Baby?

The Bathwater AND the Baby? December 23, 2018 Roger Wolsey 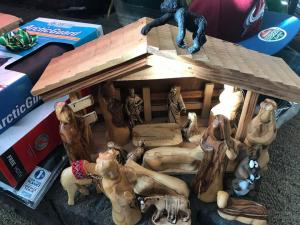 Christmas is upon us. What is Christmas? How are progressive Christians to understand it? Can we even celebrate it at all?

Most progressive Christians embrace the scholarship that points to how the stories of Jesus’ birth were tacked onto the faith well after the original gospel of Mark was written down – without any mention of his birth. Most progressive Christians consider those birth stories to be myths – myths that drew from certain portions of the Hebraic tradition, as well as pulling in certain features of several pagan birth narratives, that were woven-in in order to help both some of the Jewish and gentile communities to come ‘round to accepting Jesus, the Gospel, and Christianity. Most progressive Christians know that since several pre-existent religious traditions had long histories of demi-gods of “royal decent”, involving stars, being born “to virgins,” in caves/cow sheds, etc. (though the alleged associations with the Egyptian god Horus are bunk) – and since there were certain prophecies within Hebrew scriptures concerning a coming messiah – the authors of Matthew and Luke presented stories about the birth of Jesus to help him “more properly fit the part” of an important spiritual figure. Most progressive Christians accept that the mid-winter timing of Christmas was strategically chosen to co-opt and supplant the rivaling pagan celebrations of Saturnalia, Solstice, and Yule. We know that the season of Advent was created to provide a “winter Lent.” And most progressive Christians know that for the first few centuries of the faith the early Christians didn’t celebrate Jesus’ birth at all – celebrating the Resurrection (aka “Easter” – a whole ‘nother matter) was the main event and chief holy day in the Christian world.

“Knowing” all of this … how on earth can we, with any integrity whatsoever, celebrate Christmas at all?

To be sure, Christmas is a muddied amalgam of Judeo-Christian myths wedded to certain pagan holiday traditions from ancient Rome, proto-European countries. Western Christians tend to focus on Christmas as a celebration of the birth of the Christ – “the anointed one, the chosen one, the messiah.” Christians often conflate these terms with, Lord, Immanuel (“God with us”), Son of God, and savior as well. Many progressive Christians have come to be a bit allergic to several of those terms and titles for Jesus – instead favoring more modest and less exclusive titles such as “teacher, master, rabbi, prophet, holy man, holy one,” etc. I suppose we do this in part to shed the patriarchal and medieval aspects of the faith that seem archaic, antiquated, obsolete, and even offensive. Some of us do so because we reject the literalist interpretations of those terms that many fundamentalists and conservative Christians have in mind when they wield those terms. Indeed, many progressive Christians reject the notions that Jesus was God literally incarnate in Jesus; or that Jesus was literally “God with us”; or that he is literally “God.”

There are sound scriptural reasons for this perspective. Jesus never overtly states that he is God in any of the Gospels – not even in John. In the synoptic Gospels (Matthew, Mark, Luke) Jesus makes a point to distance himself from being associated or confused with God (“No one is good but God alone” Mark 10:18, Luke 18:19). When teaching about the end of the earth/worldly empires, Jesus said, “No one knows about that day or hour, not even the angels.. nor the Son, but only the Father” (Matthew 24:36). Jesus told Mary Magdalene, “I am ascending to my Father and your Father, to my God and your God” (John 20:17). Jesus prayed to God – not to himself, e.g. Mark 14:35-36). Whoever wrote Timothy didn’t think Jesus was God as he wrote, “For there is one God, and there is one mediator between God and men, the man Christ Jesus” (1 Timothy 2:5). And Jesus, at least in Mark, primarily refers to himself as the Anthropos – “the human one” (often translated as “son of man”).

Okay so Jesus isn’t literally God, he wasn’t God in the flesh – at least not any more than you or I are (which isn’t a small thing). I, however, would like to invite us to not be quite so quick to jettison all of these terms, titles, and references for Jesus – Joshua/Yeshua bin Joseph of Nazareth. It is possible to embrace those titles and mean them metaphorically, to embrace them as the poetic language of devotion that they actually are – and, I’d say were originally intended to be (along with the late Marcus Borg before me). We can embrace a metaphorical “Jesus is all of God that can fit into human form” perspective. And we can even pray to Jesus knowing that’s a small idolatry and that neither Jesus nor God frankly care that much about such trivialities. God no doubt, metaphorically, smiles when people pray to Jesus instead of to Her. What matters is that we’re connecting.

Similarly, certain progressive Christians have difficulty and even some allergy to referring to themselves as “Christians” – “..some progressive Christians prefer to call themselves ‘followers of the Way of Jesus’ instead of ‘Christians.’ It helps keep the focus on what they think Jesus intended — off of Him and more on the Way and the God he was seeking to invite people to experience and follow.” – p. 55, Kissing Fish. I can appreciate that, yet I actually prefer to call myself a “Christian” as I’m seeking to reclaim that word, and Christianity, from the fundamentalists and conservative evangelicals who’ve effectively hijacked those words for the past 40 years. And many progressive Christians are with me. Thank God for the adjective.

I think this same insight is help helpful for approaching Christmas. Instead of rejecting the celebration or minimizing it – we can reinterpret it and still celebrate it fully and with gusto. Look, we don’t have to believe that God “sent Jesus to the world as God’s-self to experience a human life, in order to be killed by us in order to save us” to appreciate Christmas. We don’t have to believe that Jesus was somehow literally Immanuel – God with us – in a way that we aren’t, in order to be joyous about how Jesus showed us how to value that of God, the divinity within each of us. We don’t have to believe he was literally born of a virgin, or that his parents took some sort of rather preposterous journey to Bethlehem to engage in some sort of unhistorical census in order to appreciate that he was born to a peasant family in the far eastern sticks of the Roman empire in a lowly state – to joyously celebrate how God works in surprising ways from the margins to defy the oppressive powers the world. We can know that December 25 was a capriciously (though intentionally) assigned date for Jesus’ birth intentionally chosen to rival and supplant pagan mid-winter holidays and still wish Jesus a happy Birthday and sing hymns and carols with vigor –without taking the lyrics literally.

We can still claim Jesus as Lord in a meaningful way – in the subversive spirit of speaking truth to power which poetically asserts that a crucified peasant from the sticks is Lord – and that the Roman Emperor, or any other worldly leader – isn’t. It’s more a defiant social protest than a declaration of ontological fact. God isn’t really here to “Lord it over us”, but rather to Love us. That is part of the Christian Gospel.

“In 6-4 BCE, Yeshua of Nazareth was born into a humble, peasant family, in a tiny town, in the backwater hinterlands of the Palestine territory on the eastern edge of the Roman Empire. It doesn’t really matter if Jesus was born to an actual virgin or not – or even if he was born in Bethlehem for that matter. The point is moot. Either way, he grew up to be our savior. In fact, if Jesus wasn’t born to a virgin, being born as a bastard to an unmarried teen-aged peasant girl from the sticks on the far fringes of the roman Empire would have only further highlighted God’s amazing and empowering ways.” – p. 109, Kissing Fish

So let’s deck the halls, trim the trees, set out the nativity set/crèche, sing the songs, drink the nog, and give the gifts in honor of the one who inspires us to grow in God.

This is an edited version of an essay was written on Nov. 29, and first appeared on Progressing Spirit on Dec. 6, 2018. 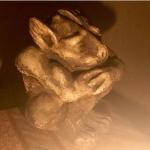 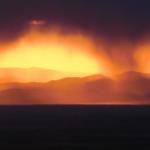 The Inherent Relationship of Love and Justice (Part...
Love that only leaves the privileged in a conscience-appeased state so they...
view all Progressive Christian blogs
What Are Your Thoughts?leave a comment
Copyright 2008-2021, Patheos. All rights reserved.
error: Content is protected !!