The Scandalous Abortion of Savita Halappanavar

(WARNING: I’m pissed and I’m not mincing words or emotions here. I’m not reporting, I’m venting. I’ll post links to other stories and all that jazz later, once I cool down.)

These idiots — who denied Savita Halappanavar an early induction that would have saved her life — deserve court and confession, prison and penance.

These idiots also happen to be my religious kin. They used the word ‘Catholic’ and their Irish national identity carries a long, storied relationship to my Church. In this case I might as well be an Irishman. We cannot throw out the uncomfortable and inconvenient; we must face it and speak to it directly. When your brother or sister commits a heinous crime, you cannot disown them. You are responsible. There is nothing easy or tidy about it.

Guilty by association. That’s me. Guilty. It is not fair and it doesn’t follow rationally, but it does resonate because it should. I am my brother’s keeper. I will not try and be calm about this. I’m certainly not a fucking journalist. I write this as a Catholic, a furious, outraged Catholic. Nothing more and nothing less.

The failures in this case are widespread and devastating. Let me clarify why this case makes me particularly angry. Why my own relation to, and complicity with, this disaster tears at my being. Why I could hit somebody — as terrible as that sounds, but true as it is — right now.

First, the physicians in question did not deny Savita an abortion. They effectively aborted her, the mother. In doing so, they violated the statutes of the Irish Medical Council and, therefore, the law. They were not following the law of the land and deserve to be tried in court (for at least involuntary manslaughter) and quarantined from the Irish medical community. Two people died — Savita and her child — but the mother died from a formal, intentional neglect that was clearly accounted for within the present legal scope of the matter.

Secondly, the absurd claim that they supposedly made to justify it — “this is a Catholic country” — not only puts them at odds with their country, it also violates Catholic teaching, regardless of what our monstrous politicians say about it. Savita was NOT asking for an abortion. She was asking for her life to be saved. The unintended effect, most likely, would have been the death of her child (a tragedy in its own right), but it would not have been the intended outcome of the procedure. A classic and easy case for any informed Catholic to respond to. Induction. No questions.

Catholic teaching and doctrine on this point derives from the principle of Double-Effect. It is well-established and very old doctrine, grounded in philosophy more than theology. It can be found in Augustine and Aquinas, and more. It can be rationally understood and practiced. These medical professionals failed to understand or practice it. Their failure, their total ignorance on what the Church actually teaches, puts them in grave offense against the Church. They need to confess and begin penance — hopefully while doing time in prison.

They’re failure, however, is not only personal and local. It is also a scandal to the Church. I am implicated in this scandal too. Even though the Church teaches otherwise, the fact that these people were so poorly catechized is an evangelical, mystogogical failure that all the faithful must embrace and share.

We should not reject the fact that this spectacular failure to understand the holistic reality of pregnancy is a particularly Catholic mistake. Let the easy blame game rage and lather, let the winners win and the loser lose, let the media and the activists on both sides have their fill on the reality they sacrifice to their gods and idols.

We, the Church, must begin with prophetic outrage and penitential humility. Then we must try to heal and understand. Testify to love.

LIFE IS NOT AN ISSUE. It is not a political trophy to be used to get votes or preserve things you like or get rid of things you don’t like. The simplistic binaries that pit women against their children and infants against their mothers has gone on long enough. ENOUGH!

Savita surely loved her child and would have mourned the loss of it’s precious, premature life. Her life is precious too. Her family, her husband — they have lost everything. A total loss. (Notice the absence of ‘buts’ in those sentences.)

I am sick over the fact that I suspect that one reason these perfect idiots thought they were following Church and State mandates had something to do with this: life has been violently re-cast and perverted into a talking point, a  sanctimonious — and expensive — lobby effort that is rooted in oversimplification and vulgar imbalance. Even those on right side of the matter are on the wrong side.

The point is that there are no sides at all! All or nothing. No sides. No factions. No sterile cheerleading and breast beating.

My silence on the beautiful question of life has been because I don’t find an easy entry into the matter. There is no room to talk about this in a way that respects the reality in question. So I’ve mostly held my tongue.

Today my silence reveals a slothful and selfish cowardice. This is not the time for silence. I fled the conversation because of election politics and the bitter, infantile rivalries within the American Catholic Church. I said to myself “I am a man. I should let the women and the infants speak for themselves.” Excuses. “Through my fault, through my fault, through my most grievous fault.”

The empty-headed, calloused opportunists — despite their truest and very best intentions — have had their say. We know what the pro-choicers and the pro-lifers think. They have NOTHING new to say or add and haven’t for years. What we don’t know, and surely do not begin to understand, is the event itself. Life. The bare reality.

Savita was not aborted through malice. She was aborted because of ignorance and silence. For this reason, her death is worst than malicious. It could have been prevented by the very national and ecclesial traditions it misinterpreted. What a failure.

We can be silent no more. Amidst the petty back-and-forth, Catholics must find their voice not as pro-this or anti-that, but as Catholics. We have earned a rather nasty reputation on the matter, on both sides, but the ill repute is partly because we suck at communicating. We’re terrible right now at speaking in a voice that is beautiful and whole. We scream and shout and preach and write the truth, but our hollow truths lack the beauty to sustain them.

Let the beauty of Savita’s life and the ugliness of her death and the tragic loss of her unborn child be our compass today. May they rest in peace. May God be ever merciful. 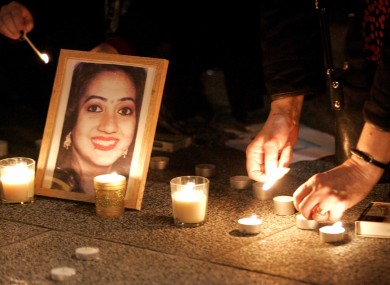 November 13, 2012
Bilingual Mass Never Quite Jives For Me: A Note on Translation
Next Post

November 16, 2012 A Proper Blog Post: Writing, Biology, Political Theory
Recent Comments
0 | Leave a Comment
"As another Professor and Doctor of Philosophy wrote, albeit somewhat hyperbolically, in First Things a ..."
F.A.Kname By Their Fruits: A Reply to ..."
""...ready to save it by penning a bestseller." Bwahaha!"
Diane Kamer By Their Fruits: A Reply to ..."
"I didn't read Rod's book, but the so called Benedict Option, whether the one he ..."
Augustine Notes In Defense of Rod Dreher
"You're more gracious to Rod than he deserves in this case. What a snit fit. ..."
Justin Conder Notes In Defense of Rod Dreher
Browse Our Archives
get the latest from
Catholic
Sign up for our newsletter
POPULAR AT PATHEOS Catholic
1