The Creation Museum on Race

Content Note for discussion of racism, and images depicting slavery and genocide

As you may know, I recently took a trip with my spouse to the Creation Museum in Kentucky. I’ve already documented my experience in blog form, and have written about some of the “subtle” sexist and hetero and cisnormative agendas behind the place.

I’d also like to talk briefly about the…interesting…way the Creation Museum handles the topic of race.

As a white person, I want to trend carefully on this topic. I don’t claim to be an expert on racial issues, since I do not experience racism in my everyday life. But since I was able to take this trip to the Creation Museum, I would like to share what they have to say. Others who are more experienced in the topic can feel free to delve into deeper analysis.

Weirdly, I do think the Creation Museum brings up some valid points on this topic. It often brings up the ways in which evolutionary ideology has historically been used to perpetuate White Supremacy–something that I feel many white liberals often fail to address.

White Supremacists have, throughout history, used many sources–including evolution–to justify their mistreatment and marginalization of others. The Creation Museum addresses this: 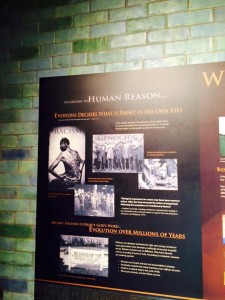 Even evolutionary biologist Stephen Jay Gould has pointed out the ways that people (historically and today) use philosophies based in evolutionary science to oppress others (Rocks of Ages pg 166):

One of the saddest chapters in the entire history of science records the extensive misuse of data to support the supposed moral and social consequences of biological determinism, the claim that inequalities based on race, sex, or class cannot be altered because they reflect the innate and inferior genetic endowments of the disadvantaged.

In this sense, the Creation Museum is right–evolutionary science has been used to justify genocide, racism, eugenics, and more. This is where you get the racist lies that people of color are more “animal-like” than white people, not as intelligent as white people, not as social developed, etc.

Many calls to wipe out entire groups of people (for the “good” of the overall human race), and calls to prevent certain groups of people from reproducing draw on “evidence” from misapplied evolutionary science. I think white liberals need to stop ignoring this.

And yet, the Creation Museum merely brushes off the many religious justifications of White Supremacy: 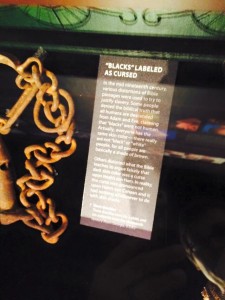 Both applications, however, have and continue to lead to horrific injustices.

Both white-centered science and white-centered religion need to own up to the ways their ideologies have been used to support White Supremacy. While the Creation Museum is quick to call-out evolution, it brushes aside the problems with white-centered Christianity, leading me to wonder whether they are actually concerned with racial injustice or just trying to use racial struggles to promote their own agendas.

This reminded me of something that @JoansPants said recently on Twitter: 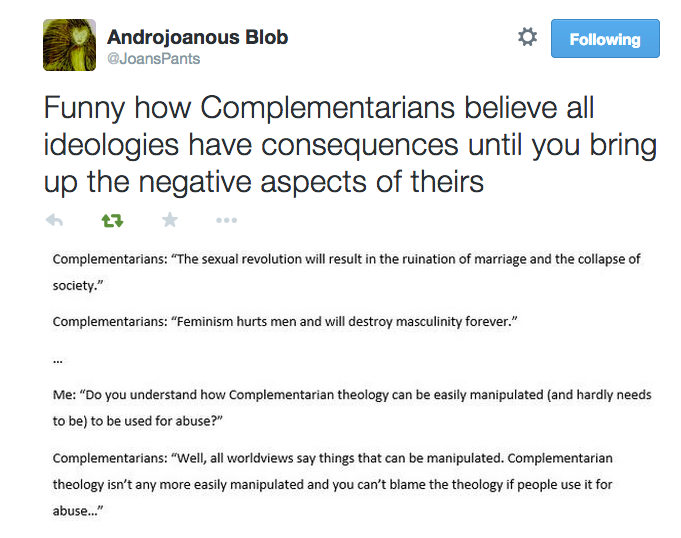 I think these same arguments are often used to talk about race. To the folks at the Creation Museum, “all ideologies have consequences, until you bring up the negative aspects of theirs.”

There’s also a few even more subtle aspects of race that come into play when talking about the Creation Museum.

One section of the museum walks visitors through the “state of the modern world” that has supposedly rejected the teachings of God. This section–meant to be the embodiment of evil in the world and the rejection of God–looks like this…. 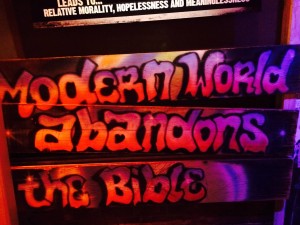 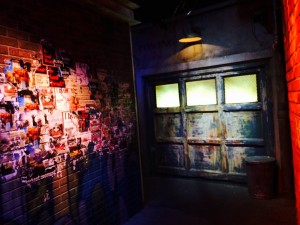 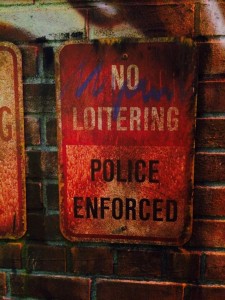 This section of the museum is set up to resemble the inner city. This seems to me to perpetuate the deadly, racist stereotypes of “scary,” “dangerous,” inner-city (aka, black) people. There are even magazine and newspaper clippings plastered to the walls featuring men of color holding guns, and articles about Islamic terrorism. 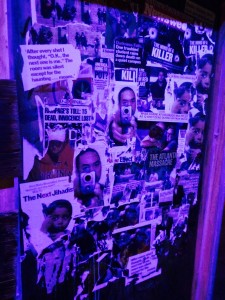 Besides the subtle connection between inner-city life and people of color with the “rejection of God,” the Creation Museum also fails to address the root problems behind the “scary” scene they have tried to set up.

Rather than talking about White Supremacy, racism, poverty, police violence, colonialism, etc. the Creation Museum chalks up all of this as the result only of the “rejection of God.” Though many of these forms of oppression have and continue to use the Christian religion to justify their evils, the Creation Museum indicts only atheism, science, and non-Christian religious beliefs.

The Creation Museum’s “solutions” to racism are also sketchy, as they invoke color-blindness. One display (shown above) claims:

…there really are not ‘black’ or ‘white’ people, for all people are basically a shade of brown.

The museum argues that the solution to racism is to simply give up evolutionary thought, and believe that all people descended from a literal Adam and Eve. I won’t claim that there can’t be positive anti-racist arguments drawn from the Adam and Eve narrative. However, I wonder if this thinking could be used by white people to perpetuate color-blind racism:

Why isn’t there a WHITE history month?

Isn’t it REVERSE RACISM to talk about people of color so much?

That sort of thing.

In short, the Creation Museum is problematic in all sorts of ways. In addition to the phony science, it perpetuates sexism, hetero and cis-normativity, and may even perpetuate color-blind racism and racist stereotypes.

February 25, 2015
"Damaged Goods" Has Something For Everyone
Next Post 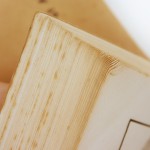 March 16, 2015 Reconciling God and Evolution, Part 1: The World Between The Covers Of A Book
Recent Comments
0 | Leave a Comment
"This, this right here. 👍👍👍"
Lir Talan 12 Reasons Why You Can Totally ..."
"I agree with you totally..I walked away from main stream Christianity and my calling due ..."
Bill Luginbill Telling My Own Story: A Perspective ..."
"Right there with you. The 'stop crying or I'll give you something to cry about ..."
Stacey Swanson Privilege, oppression, and being “nice”
"Sarah Moon writes as if she believes that complementarians have pulled this view out of ..."
Eli Taft Complementarians are trying to scam us.
Browse Our Archives
Related posts from Sarah Over the Moon