rise up: taking a crippled world to its feet

rise up: taking a crippled world to its feet December 5, 2017 Sarah Thebarge

When I’m really, really, really tired, sometimes upbeat music wakes me up more than caffeine.  So yesterday in my hotel room, when I had to wake up early to run all the errands I needed to before traveling on to South Sudan, I cranked my favorite music and danced in my hotel room as I prepared for a long day.

One of the songs on my playlist is Rise Up, by Andra Day.

One of the lines caught my ear:

We’ll take it to its feet…and rise up.

Usually when I hear about people talking about bringing a crowd of people to its feet, it means people are so excited or enamored by a performer, they give the artist or musician or politician or athlete or celebrity a standing ovation.

That’s one goal, right?  Bring the world to its feet in a deafening applause for you.

But yesterday, as I was preparing to run errands to get all the medicine I need to take to kids who are dying in the developing world, the line took on a whole new meaning.

Take the world to its feet…and rise up.

…the way that Jesus healed the crippled man lowered through the roof by his friends, to whom Jesus said, “Get up!”

…the way Jesus said to Lazarus, “Come forth!”  And brought a dead man to his feet.  Back to health, back to life.

And while obtaining those things isn’t intrinsically bad, we fall short if we make them the endgame.

Because our ultimate purpose on this earth is to bring a crippled, dying, aching, suffering world to its feet, one person at a time  — whether those people are next door, across state lines, over the border or across the world.

So let’s leverage all we are and have so our beautiful but desperately broken world can rise up.

That’s what resurrection means, after all.

To “resurrect”, which was what Jesus was all about, means “to rise again.”

Over and over, refusing to stop until a crippled world is brought to its healed, solid, dancing feet.

Will The Church Survive The Covid-19...
The Thoughtful Pastor
Books by This Author Books by Sarah Thebarge 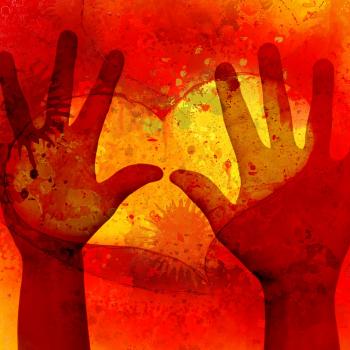