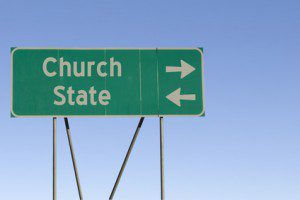 Typically, when people think of “religion and politics,” they think of social issues such as abortion, contraceptives, and gay marriage. While that’s not a bad place to start, it does in fact start at the group level rather than focusing on individuals. Wanting instead to see how religion can affect political beliefs at the individual level, Ryan LaMothe (St. Meinrad School of Theology) found five ways in which this can happen.

More specifically, LaMothe investigates how religion can lead to political conversion and vice-versa on the individual level. As much as secular governments strive for a clean break between religion and politics, LaMothe argues that the two do in reality mix, and they mix in complex ways. On the political end, religion can strongly influence which party a person votes for, and even campaigns for, and on the religious end, political views can play a major role in religious conversion – in other words, people not uncommonly change religions or denominations in order to find a fit for their political beliefs.

These five types make clear that religion has no clear or necessary connection with political beliefs or activism. Sometimes religion leads to more political involvement, sometimes none at all, and still other times the political involvement affects religion. If anything, the mix of religion and politics should be loathed not because one corrupts the other, but because the result is so unpredictable.

For more, see “Varieties of Political-religious Experience” in Pastoral Psychology.

June 25, 2013 Ritual bypasses conscious cognition
Recent Comments
0 | Leave a Comment
"The annually assessed and published Global Peace Index reveals that the most peaceful nations are ..."
rationalobservations? The End of the Conflict Between ..."
"The other related topic I’m curious about is the evolution of modality and how we ..."
Positivist Music and Dance in Human Evolution
"This is so interesting! I’ve often wondered about the role of music and dance in ..."
Positivist Music and Dance in Human Evolution
"Sorry, this comment got stuck in the spam filter for several days!Yes, things have gotten ..."
connorwood The Myth of the Egalitarian Noble ..."
Browse Our Archives
get the latest from
Science On Religion
Sign up for our newsletter
POPULAR AT PATHEOS Public Square
1