Religion and creativity: A follow-up 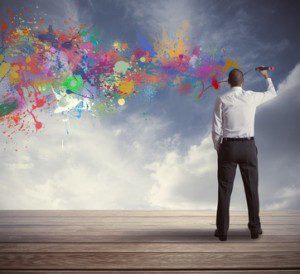 Last week, I posted a piece on this blog that quickly became…quite controversial. In it, I claimed that religious commitment was positively correlated with personal stability, but negatively correlated with creativity. My aim was to point out what had long seemed to me a personally frustrating dynamic, and to raise questions about how to reconcile or overcome it. Many readers appreciated my perspective, but plenty more thought I was off in left field. Some rejected my claim that religion is associated with stability and tight relationships. Others questioned my working definitions of creativity, religion, and science. But the most common rejoinder was, “What about all the creative religious people, and spectacular religious art, throughout history?”

I’ll try to tackle each of these challenges in turn. First, religiousness is absolutely cross-culturally correlated with personal and relationship stability. The amount of literature on this topic is enormous. One group of researchers collected 147 different studies and found that, across studies and cultures, religious affiliation reliably protected against clinical depression (for the statistics-savvy reader, the relationship’s p-value was an astonishing 0.000001). Another meta-analysis found that religiousness negatively predicted crime, delinquency, gambling, and drug use, while numerous studies have found that couples who attend religious services are less likely to divorce.*

Many of these benefits may stem from enhanced self-control and self-discipline. Across different cultures, religiously committed people score highly on two important personality traits, conscientiousness and agreeableness, which researchers think reflect task-related and social discipline, respectively. If you’re worried about self-report bias, this same finding has been replicated among children who were rated by their teachers: kids who teachers reported as being more conscientious and agreeable were more likely to be religious later in life. Other studies have shown that the depth of parents’ religious involvement positively predicts children’s levels of self-control, as rated by teachers.

Self-discipline helps people contribute to the collective project of maintaining the institutions and support structures of their culture. These structures, in turn, give people a template for living that buffers them against challenges and disappointments. They still have challenges, of course, but the intact culture and the web of tight relationships it provides means that disappointments don’t have to be crushing.

Its negative aspects notwithstanding, then, religiosity does have real benefits. These benefits seem to accrue cross-culturally and across different religions. Importantly, religious practice is what seems most important here, not personal religious belief. For example, one study parsed out religious practice – going to church, reading scriptures, and praying  – from transcendent or spiritual beliefs, and found that the transcendent beliefs alone negatively predicted self-control and conscientiousness, but were positively associated with openness to new experiences!

This finding serves as a nice segue into critiques of my definitions. Several commenters on different threads protested that they were personal believers, and although they didn’t go to church much, they were artists or otherwise quite creative. I freely admit that, in light of these responses, I should have been more careful with my definition of religion – a cardinal sin in  religious studies. For the purposes of my argument about religion and creativity, then, let me clarify my terms. Religiosity in this context isn’t just saying that you believe in God or the afterlife. It’s doing religious things, like praying regularly, going to church, attending a mosque, or reading scripture with others. A person who believes in God but doesn’t do religious things would probably be less conscientious and self-disciplined than average, and would (according to the research I just referred to) likely be more open to new experiences – a key ingredient in creativity.

Creativity is even tougher to neatly define. But it’s telling that in some ways, creativity is tautologically opposed to my definition of religion. Dictionary.com, for instance, defines “creativity” as:

“the ability to transcend traditional ideas, rules, patterns, relationships, or the like, and to create meaningful new ideas, forms, methods, interpretations, etc.; originality, progressiveness, or imagination.”

The definition of creativity, then, centrally includes the rejection of established norms. For you visual art nerds, this is why Picasso, for instance, is revered as a creative genius, while Thomas Kinkade is laughed off as kitsch. Kinkade explicitly crafted his paintings to meet established consumer preferences, including Americans’ love of representationalism, bucolic landscape scenes, and religious themes.† His art quite intentionally (and profitably) followed the culture and its norms. Picasso, on the other hand, advanced beyond the norms and expectations of his culture and time period – popularizing Cubism, transitioning styles every few years, and basically assaulting the boundaries of artistic license like Henry V storming a defenseless French town.

So if creativity has to do with transgressing social norms and limits, while religion has to do with following – even upholding and perpetuating – them, what’s with all the incredible religious art throughout history? Johann Sebastian Bach, for example, is widely regarded as one of history’s greatest composers, but he was by all accounts a religious man who spent much of his life working for churches. And don’t forget the centuries-long traditions of Islamic calligraphy, Hindu iconography, or Buddhist philosophy – each of which is richer in creative genius than entire generations of Manhattan art experts.

My first response is the easiest: exceptions don’t obviate statistical rules. On average, religion seems to encourage a personal outlook that suppresses creativity and innovation in favor of social and emotional stability. As one group of researchers put it:

The appearance of an occasional exception, such as J.S. Bach or T.S. Eliot, is no more a challenge to that rule than the occasional appearance of a Yankees hat in Fenway Park. Do people wear Yankees hats to Red Sox games? Yes, sometimes they do. But the overwhelming majority of fans at regular-season sports events in Boston are fans of Boston sports teams, and wearing a Yankees hat to a Sox game doesn’t disprove this rule. (It’s also not a good idea.)

But I want to take my response one step further than this. Despite my appeal to statistics, I think my readers have a point: clearly, there is a great deal of creativity embedded within religious traditions. There’s no way to gaze at the Sistine Chapel ceiling, look up at the Cologne Cathedral’s architecture, or listen to this arrangement of Biebel’s Ave Maria and still reasonably claim that religion is somehow categorically opposed to creative expression.

However, what does seem to be true is that many of the great religious artists and thinkers in history have been ascetics – people who have eschewed everyday family and community life in order to focus exclusively on higher, religious concerns. The Hindu philosopher Shankara, the Christian theologians St. Augustine and St. Thomas, and the Renaissance artist Michelangelo are all examples of this tendency. Generally, it seems that the more obligated one is to fulfill the roles of day-in, day-out social existence, the less easily one is able to rise above the mundane and conventional – to be truly creative, in the sense of going beyond tradition and forging new paths. People who are religious but who transcend everyday roles can get around this limitation. (Thanks to Elizabeth Scalia for pointing this out.)

Bach, of course, was actually a family man, and so I’m forced to admit that he seems to be an irksome counterexample to my model. But most of the other big-time artistic geniuses in history seem to support my case more than they challenge it. Leonardo da Vinci and Beethoven were both lifelong bachelors, for instance. So despite Bach’s curious departure from the norm, I think there is something about being embedded in the day-in, day-out ritual life of a religion or community that limits creativity.

The sociologist Max Weber observed that religion comes in both conventional, (“routinized”) and radical (“charismatic”) forms. In its radical manifestations, religion is a raging geyser of creativity, breaking down cultural barriers and tearing away at established lifeways. In its routinized form, religion is the stable, plodding foundation for everyday family and economic life. It organizes people’s relationships, stimulates in-group cooperation, and streamlines the countless social processes that undergird life. We individualistic Westerners may sneer at these stabilizing functions, but the fact is that every culture needs some version of them.

But while I respect the organizing function of religion and tradition, it’s not enough for me. I’d love to be both emotionally stable and wildly creative. This was why I wrote the original post. The ancient tension between rigid Apollonian order and wild Dionysian ecstasy hums beneath the surface of every culture; we have to make sacrifices in one realm to advance in the other. But I’m optimistic that we can learn a way around, or at least through, this conundrum. We humans do amazing things. We fly in airplanes and send astronauts to the Moon. Through studying our history, our evolution, and our spiritual traditions, I think that we can learn to harness our creative energies even as our outer lives are calm, stable, and nestled in webs of relationships. After all, we’ve already got an exemplar: the artist who contradicts my model, J.S. Bach.

* For those who have advisedly chosen wiser and more lucrative career paths than social science, a meta-analysis is a combined review of many different studies. Researchers find these studies using keyword searches in research databases, by reading literature reviews, and by following bibliography trails. They’ll often adhere to rigid criteria for deciding which studies to include; for example, a meta-analysis of medical studies on a cancer treatment might only accept industry-standard double-blind clinical trials, and reject less-rigorous case studies.

† If you would like to make the aesthetic part of your brain feel like your stomach would if you overdosed on Easter Peeps and pastel-colored cotton candy, Google-Image search “Thomas Kinkade.” There, at least now you know where I stand.
Previous Post

July 3, 2013
Why aren't religious people as creative as unbelievers?
Next Post

July 16, 2013 Religion: is it always tribal?
Recent Comments
0 | Leave a Comment
Browse Our Archives
Related posts from Science On Religion