Social Capital (and Religion?) Helped the Spread of Nazism 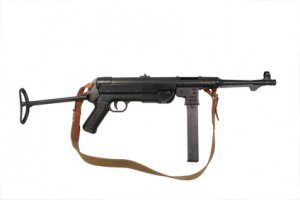 In his 2000 book Bowling Alone, the Harvard sociologist Robert Putnam popularized the concept of “social capital” – the community bonds that underlie civic life. Putnam famously claimed that organizations such as bowling leagues not only provide a pleasant social outlet, but also form the basic substructure for society itself. Community and social groups, from bowling leagues to churches, are therefore vital for the future of American civil life. But social capital has a dark side, too – one that progressives and cosmopolitans have long recognized. Tight social bonds can isolate groups from one another, solidify class and gender inequalities, and exclude “undesirables” from valuable social networks. And now, research in Germany has found perhaps the most chilling side effect of social capital yet: it helped the spread of Nazism.

Mostly, social capital is seen by sociologists and pundits as a good thing. By socializing with our neighbors and community members, we forge all-important bonds that may net us a job, a babysitter, or a lifelong friend. These informal social ties, in turn, form the underlying webbing that supports the entire superstructure of society – governments, institutions, cities, economies. Because social capital is so fundamental to a successful culture, areas with low social capital tend to be poorer, to have worse life outcomes for inhabitants, and to generally be in lousier shape by objective measures than places with lots of social capital.

But tight social bonds can have a dark side, too. In a late chapter in Bowling Alone, Putnam asked the provocative question “Is social capital at war with liberty and tolerance?” He quoted a 19th-century writer, Walter Bagehot, to illustrate the problem:

You may talk of the tyranny of Nero and Tiberius; but the real tyranny is the tyranny of your next-door neighbor. What law is so cruel as the law of doing what he does? What yoke is so galling as the necessity of being like him? …Public opinion is a permeating influence, and it exacts obedience to itself; it requires us to think other men’s thoughts, to speak other men’s words, to follow other men’s habits.

If you watch movies, listen to music, or read poetry – all of which are produced by, um, artists, who usually aren’t exactly crazy about conformity and its trappings – you may get the impression that social belonging is practically the most evil thing ever. From the anti-1950s film Pleasantville to E.E. Cummings’s disdain for “mostpeople,” artists and freethinkers often portray social belonging and allegiance as a death knell for creativity, for beauty, for freedom and tolerance. Better to be alone and free than to be a joiner who suffocates under arbitrary social conventions, rules, and standards.

However, behind many sophomoric, black-and-white glosses on the facts are uncomfortable facts themselves. Informal community groups such as singing clubs, hiking groups, and hunting organizations were widespread during Germany’s pre-World War II Weimar Republic. By many measures, social capital in pre-Nazi Germany was at an all-time high. A good thing, right? Not necessarily. This high level of informal social integration may have been exactly what the Nazi party needed to spread its message and grow its membership. Writing for the National Bureau of Economic Research in Cambridge, Massachusetts, researchers Shanker Satyanath, Nico Voigtlaender, and Hans-Joachim Voth recently found that towns and cities in interwar Germany with high social capital were much more susceptible to the spread of Nazism than their less-social counterparts. In cities where people enthusiastically participated in singing clubs and similar organizations, Nazism spread much faster than in areas where most people were dull homebodies.

The researchers’ findings were robust, holding up to statistical controls for religious affiliation, economic status, and general pre-Nazi political profile. No matter whether Catholic or Protestant, rich or poor, Germans who spent much of their free time socializing with others, hiking, engaging in civic debates, or even just singing together – singing! – were much more likely to eventually come into personal contact with a member of the Nazi party, and to be persuaded by that friend’s message. Since the party initially grew almost entirely by grassroots efforts, this kind of informal social interaction was probably vital to Nazism’s eventual rise to power. Shankar and colleagues describe it succinctly:

(T)he Nazi Party spread more rapidly in the fabric of German society where citizens had more points of social contact outside the workplace…well-connected individuals acted as political entrepreneurs. Using their social connections and professional standing, they attracted new members for the party, leading to the founding of new local chapters.

Since this is a blog on science and religion, of course, it’s worth keeping in mind that many of the organizations the authors mention, both political and non-political, military and nonmilitary, were “explicitly Catholic or Protestant.” This means that, although church membership per se wasn’t analyzed in this research, the results in part support a role for religious social integration in the spread of Nazism – and, thus, in the ignition of World War II, a conflict that by some estimates killed as many as 80 million people.

Let me be absolutely clear: I am not blaming religion for World War II. Instead, I’m pointing out that religion, and the social capital it produces, are powerful tools that can be used for good and  ill. Religion creates social bonds – that much is clear. However, what people do with those social bonds isn’t necessarily determined by religious values.

Let’s pan out for a moment. If you get together late at night with educated, creative people and start talking about religion, someone is certain to bring up the objection that religion divides people from one another. Religion – tribal, insular, parochial – often seems essentially opposed to the Enlightenment principle of universal humanity. To many people, anything that favors small groups over common world community is anathema. In fact, your cosmopolitan friends’ distrust of insular social groups may even be so strong that they get creeped out by group organizations like the Elks Club, community bowling leagues, and church choirs. Shankar and colleagues show that they’re not entirely mistaken.

Does this mean that we should all stop going to church, drop out of neighborhood groups, and throw our chips in with a global, cosmopolitan culture that is wholly abstract, and promises to transcend all petty social divisions? Hardly. Putnam showed that, in America, civic involvement – participation in small, local groups – is actually positively correlated with tolerance and endorsement of racial and gender equality. For the most part, tight, interpersonal social networks are still a good thing. They may even help the spread of universalistic Enlightenment values. But they can also be a tool for the production of hermetic social boundaries, and for the transmission of vile opinions. In other words, religion and other forms of social capital are like power tools: sometimes they cut people’s arms off, but this doesn’t mean we should throw them all in the Dumpster. That would be the black-and-white answer, and we know how I feel about that. Instead, we just need to read these tools’ instruction manuals, and be careful when operating.

My colleague Nick DiDonato has covered this same research from a different angle at our sister blog, ScienceOnReligion.org. Check out his article here.

July 26, 2013
Why IS liberal Protestantism dying, anyway?
Next Post

August 13, 2013 The "Religion vs. Creativity" Debate Rages On
Recent Comments
0 | Leave a Comment
Browse Our Archives
get the latest from
Science On Religion
Sign up for our newsletter
POPULAR AT PATHEOS Public Square
1