How do we make meaning of evolution? By admitting its uncomfortable truths.

How do we make meaning of evolution? By admitting its uncomfortable truths. June 28, 2014 Connor Wood 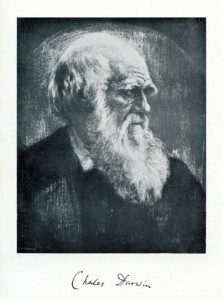 Here on planet Earth, around 3.5 billion years ago, a profound miracle happened. Somehow, organic molecules began contorting themselves into self-replicating shapes. Over the ensuing eons, further miracles occurred: simple cells became complex, melding different lineages of DNA to forge the eukaryotes, of which you and I are both members. Water-dwelling animals morphed slowly into creatures with lungs, and the capacity to breathe air. Different species developed entwined, symbiotic relationships with each other – insects pollinating flowers, flowers feeding insects. But none of these miracles were miracles in the classic sense. Aside from that first eruption of living cells out of lifeless carbon, each of these developments proceeded out of Darwinian processes, under evolutionary law. The two-million-dollar question is: what does this mean for who we are?

It’s a very tricky question, because the most vital trait of evolution is also its most difficult: there’s no purpose in it, no trajectory whatsoever. In evolution, things survive because they don’t get killed, not because they’re more noble or closer to God’s vision for how the world should be. The biological world doesn’t set out to produce anything in particular, but destroys most of what it makes – and whatever happens to be left over is what “evolution” produces. To put it bluntly, the biological world is a vast, blind sorting mechanism, an organic machine for sifting winners from losers.

For this reason, I think the conservatively religious – including those who reject evolution – are paradoxically often more honest about what evolution means for the question of who we are than most secular boosters of science. After all, when queried, secular supporters of “evolution” often can’t describe Darwin’s theory any better than a fourth-grader. Most of them tend to fall back on a kind of vaguely Spencerian, embarrassingly teleological understanding of things, one that imputes goals and purposes in evolutionary development, that assumes “evolution” means “glorious forward march of advancement!” In other words, they utterly fail to understand the goalless, meandering nature of Darwinian theory.

The deeply religious, on the other hand, astutely perceive a foreboding syllogism lurking in the evolutionary view: If evolution 1:) always operates by processes that are objectively pointless and random, and 2:) then explains people, then 3:) logically, people are also pointless. When such believers are confronted with Darwinian evolution, they therefore immediately get the heebie-jeebies. Conversely, most secular supporters of evolution simply fail to recognize the pointlessness – despite it standing right before their eyes, like a mugger – and wind up loudly “accepting” a theory which bears no resemblance to what Darwin actually taught. So which of these two types of fools is more foolish?

The educated, secular set commits other habitual blunders against the evolutionary worldview, like a wine-addled uncle at a wedding who keeps saying precisely the wrong things during a toast. These errors make it very difficult to grapple coherently with what it really means to be an evolved species.

For example, it is fashionably de rigeur in most academic circles, particularly the humanities and social sciences, to poo-poo evolutionary psychology. Our minds are cultural blank slates, these intelligentsia proclaim. We bear no deep evolutionary imprints on our psyches, which are instead entirely formed by our cultures. But rejecting evolutionary psychology implies an odd Cartesianism – a mystical mind-body dualism – that has no place in modern conceptions of who we are. Either our entire beings are the products of evolution, or they aren’t. This includes our brains, which evolved – along with the rest of our bodies – over hundreds of thousands of years. It’s ironic that it’s exactly the segment of society most eager to display Darwin-fish bumper stickers that most hastily rejects the idea that evolution has shaped the human mind, has built our evolved tendencies and instincts, and has produced cross-cultural similarities in our habits and dispositions.

At the same time, many of the same folks who reject evolutionary psychology – claiming instead that only culture shapes our minds – refuse to believe that cultures themselves, and their traditions, are anything but arbitrary, superstitious nonsense. Of course, I disagree. I’ll argue until Kingdom Come that much of what we call “culture” is a living vestige of practices and habits that have worked in the past, just as our bodies are living records of the mutations and adaptations that worked in ensuring our survival. This is the quasi-Darwinian evolution of culture. Much of it is ad-hoc and flawed (just like the human knee or lower back are flawed). But in contrary to fashionable assumptions, cultures and traditions are not completely arbitrary, not random. If culture were random and arbitrary, we could discard it at will and replace it with something better. But if culture is a living if flawed record of things that have worked in the past, or at least that have not spectacularly failed, then we ought to be careful about which parts of it we toss away.

Some traditions, of course, deserve to be tossed – slavery, for instance, or male political dominance. But we’ll never comprehend why slavery and male domination arose in the first place if we don’t explore how mindless, often brutal evolution – both biological and cultural* – crafted our minds and bodies.

By the same token, we’ll always misunderstand culture unless we accept that the traditions that have survived are the ones that somehow encoded survival-enhancing behaviors. For instance, it’s well-known that religious believers have more children than their secular counterparts. This is not coincidence. It’s because religions – which produce or inspire the lion’s share of our world’s cultural heritage, from music to stories to basic assumptions about reality – have an obligation to produce continuance. It’s simply a raw fact: religions that don’t encourage people to reproduce themselves, both biologically and culturally, will not be the ones that last.

So look around you. See the world’s various religions? They’re the ones that made it. They’re the ones that somehow got people to behave in ways that could sustain social life for longer than a generation. All the other ones – the micro-cults, the flash-in-the-pan revivals, the short-lived movements – died out, because for one reason or another the behaviors and thoughts and practices they inspired didn’t lead to cultural survival.†

But of course, “survival” isn’t the same as “happiness.” This is one of the most difficult truths about evolution. It’s just a blind process, and the only outcome it selects for is continuance, not well-being. Similarly, cultural evolution doesn’t care about such things as gender equality, or individual liberty, or other Western liberal values. It only measures whether culture reproduces itself successfully.

What I’m saying is that despite massive cultural, educational, and even emotional barriers, we must learn to understand ourselves – all of us – as living in an evolutionary world. This requires courage. It demands real fortitude to look our animal nature squarely in the eye. It requires resiliency to admit that what has worked in our animal or cultural past is not necessarily what is good, but that evolution – and therefore Time – will always, always choose what works over what is good.

And we must learn to make meaning of all this. One way is to draw on our spiritual traditions. As the writer Madeleine L’Engle urged, we must live in a cosmos, not a chaos. Our handed-down cultures can help. In the Bible, the book of Ecclesiastes expresses the gloomy sense that life is “meaningless,” that things have no purpose. Reading this can help us realize that other people in times long past also recognized the seeming purposeless of life, and wrestled with it. In the Quran, Muhammad seems to have evolution’s number, warning not to measure one’s worth by the number of one’s children. In the New Testament, Jesus admonishes his apostles not to follow the ways of “the World.” What is “the World?” It’s the struggle for wealth, for status – for all the things that lead to evolutionary success. Both Muhammad and Jesus can help us understand that our biological success and our ultimate worth are not actually the same things.

When I argue that we should draw on the world’s religious resources to deal with the troubling implications of evolution, I usually offend just about everyone. Conservative religious believers get outraged by the claim that all religions and traditions are living records of habits and traditions that have worked, in their unique settings and contexts. It seems like cultural relativism, which no good traditionalist can brook. They also get upset by having to accept the reality of biological evolution. Secular progressives, meanwhile, roll their eyes at the idea that traditional cultures – with their illiberal patriarchy, mysticism, and parochialism – might have some valuable, even indispensable, benefits to offer. And they’re supremely irked by the insistence that our brains and minds have been shaped by evolution, which implies, for example, that not everything about gender and sex is a cultural construct,** and that biology places genuine limits on how we can construct our cultures. The fact that I’m offending everyone makes me hopeful that the direction I’m pointing is a good one, because it’s not partisan. Somehow, we can wrest meaning out of the amoral mess of our evolutionary world.

* Some thinkers are proponents of “universal Darwinism,” or the idea that any process governed by competition and differential survival rates can be usually described using analogs of Darwinian theory. I’m one of them.

† One example? The Shakers (God bless them), who enforced strict celibacy and relied exclusively on new recruits to sustain their numbers. Unsurprisingly, today they are as extinct as the dodo.

** I am not advocating homophobia or the poor treatment of anyone on the basis of their sexuality here. Not for a second. But I am pointing out that sex is, despite gender theorists’ protestations to the contrary, not any more a cultural construct than is the Mariana Trench. As biological beings hoping for progeny, women and men face slightly different strategic situations in that children are a much greater biological burden for women (who must carry them in utero for nine months and breastfeed for perhaps years afterward). This has led to different sorts of sexual strategies. (Read Jared Diamond’s magisterial little book Why Is Sex Fun? for more.) Yes, gender roles are massively shaped by cultures, but it’s not coincidence – for example – that polygamy is extremely common around the world, but polyandry isn’t. Male and female sexual strategies have been uniquely shaped by the very different contributions that each sex makes to reproduction. Remember: evolution doesn’t care about whether we’re happy, or whether we’re free to express our truest selves. It just cares about the scorecard of survival and continuance. Period.

June 19, 2014
Theories of religion: The early years
Next Post

Controversy over Communion in the Catholic Church goes...
Biden is not the first public figure to whom the Catholic Church...
view all Public Square blogs
What Are Your Thoughts?leave a comment
Copyright 2008-2021, Patheos. All rights reserved.