Do we have free will when it comes to mental illness?

Do we have free will when it comes to mental illness? August 25, 2014 Connor Wood 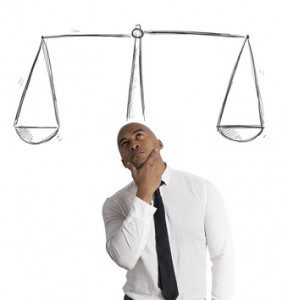 I got a tremendous outpouring of positive feedback for my essay last week on my own family’s struggles with depression. Thank you to everyone who read it and commented. Of course, no essay is perfect – many readers criticized the emphasis I put on choice, or free will, in that article. Depression isn’t a matter of choice, these critics argued. Nobody chooses to be depressed. Telling people to pull themselves up by their bootstraps doesn’t help anything. These commenters’ challenges give voice to some of today’s most important questions: what is mental illness? What’s mental well-being? Do we have any agency in it? The answer to that last question is yes – we have agency if we exercise it.

There are several very good reasons why people might reject the idea that free will plays a role in mental illness. The first reason is the most obvious: nobody wants to be depressed. Or bipolar. Or schizophrenic.

The second reason is a corollary of the first: no one wants to feel as if they are at fault for the terrible feelings crippling their emotional lives. A depressed person already feels bad enough; she doesn’t need some self-righteous Internet pundit telling her that she’s to blame for her bad life choices, or for the chemical firestorm that’s erupting in her head.

In light of these critiques, let me describe three possible models of a condition like depression.

In the Bootstrap Model, mental illness is your fault. Depression is a choice. You need to pull yourself up by those bootstraps, put on a happy face, and exercise (or pray, or work, or smile) those blues away. But while it’s true that forcing yourself out of your apartment and going for a run can be a great cure for the blahs, the Bootstrap Model does exactly the wrong thing by implying that depressed people (who often already feel tremendous self-loathing and guilt) ought to feel even guiltier about what’s happening to them.

The Chemical Model is different. In the Chemical Model, depression is not a choice. It’s chemical. You’re not at fault for your suffering, because sometimes people’s brains just don’t work right – the serotonin balance goes out of whack, and depression is just the natural consequence of this chemical imbalance. (Although this story is probably too simple.) This chemical model relieves the guilt and moral pressure on the depressed person. But it also burdens that person with the understanding that his condition is essentially random, that his emotional self – the most important part of his subjective being, mind you – is just flotsam buffeted around on endless waves of chemicals and molecules.

The Social Model agrees that mental illness is not the sufferer’s fault. But it argues that many conditions our society calls “mental illness” are actually complex emotional responses to social circumstances, relationships, or life contexts.

For example, many researchers describe depression as a physiological response to losing social status, or rank, in a group. This is why workers who have just been fired or laid off – especially, but not limited to, men – are especially prone to depression. For the emotional brain, losing a job isn’t so different from being expelled from the tribe. Your social rank goes from high to zero.

Being socially demoted sparks a depression response, researchers argue, because our bodies – and those of other social animals – are designed to make us take a breather when we encounter uncertain or precarious social circumstances. Temporary depression makes you withdraw from the frantic arena of social competition and protect yourself from further defeat. Lying around feeling blue doesn’t feel very good, but it gives you time to reassess your new position, lick your wounds, and recover your strength.

Social hierarchy plays a role in mental illness in other ways, too. Take social class and race. African-Americans are much more likely to be diagnosed with schizophrenia than white people are. This is even true when psychiatrists are presented with the same case reports, but with either white-sounding or African-American names added to the files. Why? The answer may be historical – medical scholar Jonathan Metzl has demonstrated that, in the 1960s, schizophrenia was used to diagnose black men who took part in the Civil Rights and black power movements. The adjectives “hostile” and “aggressive” were added to the DSM manual list of symptoms of schizophrenia, and suddenly, it became a lot easier to “diagnose” black Americans who were justifiably angry at being treated like second-class citizens. Problem solved!

So, between American culture’s absurd social pressures and the medicalization of perfectly normal emotional responses, do we actually have any say at all in whether we stay mentally healthy? Can we have any free will whatsoever?

Yes, we can. Mental illness arises from complex interactions between the self, the social environment, and our own behaviors and habits. We can’t control others, nor (for good or ill) do we have much control over our broader social world. But to an extent, we can control our habits. And habits matter.

Psychologist Roy Baumeister (whom I mentioned in my recent piece on warlike fundamentalism) has shown that willpower, or the ability to choose difficult rather than easy things, is like a muscle – it gets tired easily, but it can also be exercised. The more you draw on your willpower in one day, the weaker it’ll be come evening. (This is why we often break down on diets at the end of a long day.) But the more you use your willpower over time, the more willpower you’ll have overall. And interestingly, Baumeister has also found that people who are told that they have no free will are more likely to cheat on tests, and to commit other ethical infractions. Believing we have free will actually helps us to behave well.

So to have free will, we have to exercise it. William James once admonished, “do one thing every day or two for no other reason than that you would rather not do it.” If we train our willpower by exercising it every day, we develop our ability to counter bad habits – smoking, drinking, watching too much TV. I know these things are all clichéd, but our seemingly minor vices can play an outsized role in whether we stay mentally healthy or descend into pathology. The more we acquiesce to little comforts and distractions from life’s problems, the less personal power we give ourselves, and the unhappier we tend to feel overall. Research has shown that people with more willpower are actually happier and have better life outcomes. In part, this is because they tend to accomplish their goals more often, and to have better relationships. Relationships, in turn, are powerful protectors against depression. We’re talking about feedback loops here.

I know I’m not articulating a popular position. It’s sometimes easier to blame our mental and emotional problems on the unseen chemistry of our limbic systems than to acknowledge we all have some role, no matter how small, in how we feel. But this doesn’t mean it’s your fault if you’re depressed or bipolar or schizophrenic. The truth is, all three of the models – bootstrap, chemical, and social – have something useful to say. Chemical imbalances really can sometimes thwart our every attempt to feel better. At the same time, our relationships and social worlds can be the deciding factor between health and illness. And our own choices can create an underlying scaffolding for either emotional thriving or difficulty.

So you can’t just decide your way out of feeling lousy. But you can decide some of the concrete actions you take each day. Even very small choices and actions can build up over time. Are you feeling depressed? Then don’t drink. At all. Period. Not a drop. Alcohol is a depressant. It makes people depressed. If you’re struggling with depression, avoid it until you feel better. Are you prone to feeling lonely (like I am)? Then make it a brute habit to reach out to friends or family members, every day – text or call or email for no reason other than to say hi.

These tricks, these life hacks, won’t help everyone. I’m not arguing that mental illness is the sufferer’s fault or that medication is useless. Sometimes, chance and life circumstances just don’t lend themselves to feeling good. If you’re trapped in a tiny town caring for your elderly parents and all your friends have moved away, it might sound pretty insulting to hear some Internet blather about the power of habit. And countless people around the world find themselves in equally difficult – or worse – circumstances every day. You cannot just will your way out of feeling such pain.

But you can have power. You do have power. We are never – ever – merely the victims of circumstance, even if circumstances dictate nearly everything else. It is dangerous and irresponsible to constantly claim, as our popular culture does, that our mental well-being depends purely on chance levels of hormones and neurotransmitters, or that mental illness can strike anyone, anywhere, anytime. Mental illness is not completely random. Context matters. We actually have to take seriously that we are complex, unimaginably social animals, and that our social lives, our habits, and our brains all play a role in how we feel. Most of all, we need to reject any narrative that casts us – any of us – as hapless victims. Bad stuff really does happen, yes. And life is extremely hard. But this doesn’t mean we have no choices, no agency, no free will. In fact, sometimes free will – humble, incremental, habitual – is the only thing we have in the world.

September 9, 2014 Entheogens may expand possible brain interconnections
Recent Comments
0 | Leave a Comment
"menangqq adalah situs permainan poker Online dengan server kualitas terbaik dan bonus ratusan juta rupiah"
berbonusqq When the Social Order Has Legitimacy ..."
"This post is spot on. The problem is accentuated by a disparagement of cultural traditions ..."
Positivist Is Academia a Failed Initiation Rite?
"Another example of WIERD being, well, the weird exception to the rule.The "missing second half" ..."
Kevin Kostlan Is Academia a Failed Initiation Rite?
"Good points, Elritus.I think often times folks are right to resent a system (or System) ..."
connorwood The Symbolism of Old Gods and ..."
Browse Our Archives
get the latest from
Science On Religion
Sign up for our newsletter
POPULAR AT PATHEOS Public Square
1