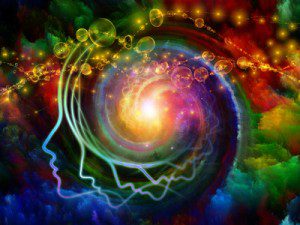 In the Book of Ezekiel, the eponymous prophet witnesses fantastic, even psychedelic visions: chariots in the sky, angels, the works. (Ezekiel 37 luridly recounts, for example, that the prophet sees a valley of bones that begin to reassemble themselves as he speaks.) But Ezekiel’s visions aren’t just odd. They’re profoundly meaningful, at least for the prophet. This combination of dreamlike oddness and paradoxical meaningfulness is one of the most pervasive qualities of religious – and entheogenic – experiences across traditions. Now, new neuroimaging research may help us understand one part of this picture: how psychedelic substances relax the normal patterns of connectivity in the brain, allowing for powerfully associative mental experiences.

An international group of brain scientists and neuroimaging experts led by Enzo Tagliazucchi of Goethe University in Frankfurt, Germany, were inspired by the fact that psychedelic and dream states are both subjectively hyperassociative. That is, people under the influence of hallucinogens or deep in REM sleep often perceive sensations and ideas that would otherwise seem mutually unrelated to be meaningfully connected to each other. Calling such experiences “unconstrained cognition,” the researchers postulated that their neural underpinnings might be  shifts in functional connectivity between different brain regions, as well as changes in the variability – and thus in the level of coherence – of brain activity.

Relying on functional Magnetic Resonance Imaging (fMRI) equipment, Tagliazucchi and the other researchers used Blood Oxygen Level Dependent (BOLD) scanning techniques to study how subjects reacted to hallucinogens. In two separate sessions, fifteen volunteer subjects received either a placebo or intravenous psilocybin – the active ingredient in “magic mushrooms.” Every subject received the placebo and the psilocybin once each, but whether the psilocybin was administered in session 1 or 2 was decided randomly. Thus, every subject was his or her own control.

BOLD fMRI uses the magnetic difference between oxygenated and deoxygenated blood cells to show brain researchers where the brain is hungrily sucking up the most blood. BOLD imaging techniques pick up the changes between levels of oxygen-rich and oxygen-depleted blood, which means that researchers can see where the brain responds to an intervention or stimulus – say a pinprick or a drug – regardless of whether that response takes the form of increasing or decreasing activity. The brain’s responses are extremely complex, but usually internally coherent: in response to any given stimulus, some parts of the brain will likely get excited all together, while others might simultaneously calm down in tandem. These intercorrelated regions are called networks.

In light of the extensive functional connectivity throughout the brain, Tagliazucchi and co-authors describe the brain as being a complex, self-organizing system that’s constantly teetering on the balance between chaos and order. Order comes when various regions of the brain are stably correlated with each other – that is, when the same brain networks light up or cool down at the same time. Chaos awaits when those stable patterns of order and correlation break down, allowing new, less stable or permanent patterns of coherence to arise.

So what happens when you introduce psilocybin into the mix? The researchers’ findings suggest that, on one hand, psilocybin may push many higher brain networks towards greater disorder or entropy, weakening their usually dominant patterns of coherence. However, more basic, fundamental structures may experience a reordering of coherent patterns, in some cases becoming densely interconnected. In the researchers’ words, then, while the total activity of the brain becomes less ordered during psychedelic experience, “the repertoire of possible states is enhanced.”

Specifically, Tagliazucchi and fellow researchers found that a number of “resting state networks” – brain networks that are active when the brain is not focused on a particular task or goal – showed greater decoherence during a psilocybin trip. One network in particular, the “default mode network” (made up of the medial prefrontal cortex, medial temporal lobe, posterior cingulate cortex, precuneus, and parts of the parietal cortex) showed marked decrease in low frequency signals and an increase in random signal spikes. Low frequency signals are signs of strong coherence throughout the network, so the scans indicated that the default mode network was becoming less internally coordinated with itself as the psilocybin took hold.

Deeper in the brain, however, parts of the limbic system were becoming more internally coherent, although in highly unusual patterns. Specifically, the left and right hippocampus and the left and right anterior cingulate cortex – which are normally correlated with each other in relatively simple ways – showed remarkable new patterns of intercorrelation. The researchers referred to some of these patterns as “among the most interconnected states possible.” See the visual below for an example.

Under the influence of psilocybin, the normally simple patterns of coherence between these limbic brain structures gave way to some seriously complicated, almost dizzying interconnections. Interestingly, these parts of the brain are implicated in emotion processing and memory. What’s more, many other studies have found changes to the hippocampus during psychedelic and psychotic experiences. It’s possible, then, that increasing variability of connections within this region allows the brain to pump out novel associations between different memories and experiences – and to tag these associations as emotionally powerful and meaningful.

This effect may be magnified by the hallucinogen-induced suppression of the default mode network, which is a major contributor to the sense of “self” that we all experience. (The default mode network also plays a major role in social cognition – which is unsurprising, considering how much of our sense of self arises from our social contexts.) As the everyday, coherent sense of “self” fades into the background, a person under the influence of psilocybin may be able to take the novel, dizzying associations produced by her limbic brain more seriously.

This research by Tagliazucchi and fellow scientists suggests a possible mechanism by which hallucinogens allow the brain to produce rich, hyper-associative imagery that seems meaningful and profound. By releasing the everyday patterns of stable, internal coherence between different regions of the brain, psilocybin increases entropy in the brain – in the sense that normal patterns of order begin to break down. But as these stable patterns weaken, new patterns are allowed to emerge. In short, the brain trades a few highly stable states for a wild smorgasbord of novel, less stable possible ones.

Let’s go back to Ezekiel, and the millions of other individuals throughout history who have had profound religious experiences. It’s extremely unlikely that any one explanation will encompass everything we call “religious experience.” Such experiences almost certainly aren’t all identical, either subjectively or neurologically. However, Ezekiel’s prophetic visions, or Muhammad’s encounter with the angel Gabriel in the Cave of Hira, or the reveries of St. John of the Cross, have some important similarities to the unconstrained, hyper-associative reverie induced by drugs like psilocybin. Such hallucinogens are often called “entheogens’ for a reason – for their users, they appear to facilitate experiences of the divine.

It may be, then, that the dreamlike hyperreality of psychedelics is a model for the wildly associative, emotionally compelling experiences of mystics. Something similar to a psychedelic trip may have been happening in Ezekiel’s brain, allowing it to call forth powerful, emotionally evocative imagery and making it possible for him to take it completely seriously. Does this mean that mystics are all just hallucinating? Possibly. But not necessarily. They might just be looking at reality from a different perspective. Or seeing connections that other people – with their stable, everyday brains – tend to miss.

August 25, 2014
Do we have free will when it comes to mental illness?
Next Post

Public Square
The Future of Religion: What Follows the Decline...
Science On Religion
TRENDING AT PATHEOS Public Square