Want a meaningful life? Stay away from rich countries 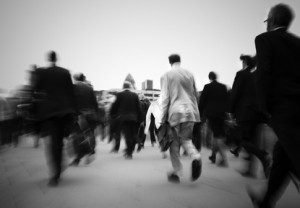 Money. Moolah. Cash. The almighty dollar. The world economy is set up to produce it, and our working lives are spent making it. It seems obvious that the more of it we have – whether individuals, families, or countries – the better. But a recent research study published in Psychological Science cautions that there might be reason to be wary of material plenty. Countries with higher gross domestic products have higher suicide rates and less self-reported meaning in life than their poorer counterparts. The study’s authors argue that religion plays a key role in explaining these unsettling connections.

Psychologists Shigehiro Oishi (University of Virginia) and Ed Diener (University of Illinois) were intrigued by the distinction between life satisfaction and meaning. While life satisfaction refers to material circumstances such as having good housing, enough to eat, and free time, meaning in life refers to a sense that one’s life has a purpose and is part of a greater whole. Inspired by the philosopher Charles Taylor’s claim that modern, wealthy societies offer less meaning to their inhabitants, Oishi and Diener wondered whether these two facets of emotional well-being (satisfaction versus meaning) might be emphasized differently in different sorts of societies. Could it be true that wealthy societies suffer from a paucity of meaning?

To test this hypothesis, the researchers drew on data from Gallup polls and information gathered by other international organizations. For meaning in life and religiosity, they used two items from a massive 2007 Gallup poll spanning 132 nations and more than 141,000 respondents. The question “Do you feel your life has an important purpose or meaning?” measured meaning in life. Meanwhile, religiosity was measured using the simple question “Is religion an important part of your daily life?” A third item asked respondents to rate their life satisfaction from zero to 10, with zero being the worst life possible and 10 being the best.

Oishi and Diener were also interested in the role that higher education, individualism, children, and social support played in meaning. Other researchers had suggested that more education and an individualistic outlook might suppress meaning in life. On the other hand, they predicted that having children and enjoying strong social supports would enhance meaning. The researchers measured education using UN data for the average years of education across nations, while individualism was measured in a poll conducted by the Hofstede Centre and fertility data was drawn from a CIA database. An item in the Gallup poll measured social support. Finally, Oishi and Diener took suicide rates from a 2011 report by the World Health Organization.

This seems like a paradox: inhabitants of wealthy countries have better material circumstances and reported higher life satisfaction than their impoverished counterparts, but reported finding significantly less meaning in life and were more likely to commit suicide. To explain these counterintuitive findings, Oishi and Diener ran statistical analyses on the role of religion, finding that religiosity was positively correlated with meaning in life and negatively correlated with country-level GDP. What’s more, when religiosity was included in the equations, the relationship between wealth and meaning receded into insignificance. In short, wealthier countries were less religious, which led to less meaning in life.

However, some interesting exceptions popped out (as they always do). But these exceptions actually strengthened the author’s claims. For example, Haiti, Senegal, and Yemen all suffered from similar levels of poverty, but Senegal and Yemen are significantly more religious than Haiti – and reported much more meaning in life. Likewise, the U.S., Kuwait, Ireland, and Japan, Hong Kong, and France were all in a similar GDP bracket, but respondents from the more religious countries (U.S., Kuwait, and Ireland) reported significantly more meaning in life than respondents from less-religious France or staunchly secular Hong Kong. In general, it was religiosity – not strict GDP – that predicted meaning in life and lower suicide rates.

But of course, the connection between religion and meaning might be just an artifact of other, more fundamental correlations. To investigate this possibility, the researchers tested four other possible pathways between national wealth and lack of meaning. In the first model, wealthy countries offered better education, which led to more critical thinking and a subsequent decline in meaning. Another model predicted that wealthy countries had fewer children per capita, which dampened meaning in life. A third model claimed that residents of high-GDP countries would enjoy less social support, which would make life feel less meaningful. And finally, a fourth model predicted that wealthy countries would be more individualistic, and more individualistic societies, in turn, would be less meaningful.

Three of these proposed models were initially supported by the data. As expected, poorer countries were less educated, were less individualistic, and had more children. Each of these variables, in turn, predicted more self-reported meaning in life. Strangely, though, social support was higher in wealthy countries, and was negatively associated with both religiosity and with personal meaning. This result contradicted many other studies that have found that religious believers have higher levels of social support – a point we’ll come back to in a moment.

To test whether the remaining three alternative models were more useful than the original hypothesis, Oishi and Diener ran regression analyses on each of the variables (fertility, individualism, and education) and religion. As expected, national levels of religiosity correlated negatively with education and individualism, and positively with fertility. However, the regression analyses showed that none of the other three variables explained the connection between wealth and meaning in life better than religion. In other words, all four variables were connected with each other, but religion was the one doing the real work.

The results of this study support a venerable theory of suicide propounded by sociologist Émile Durkheim: suicide, Durkheim claimed, increases in societies as religiosity declines, in large part because religion enables people to feel that their lives have a coherent purpose. It’s an open question – and the topic for another article – why increasing wealth leads to plummeting religiosity, but meaning in life appears to be an important player in people’s (and nations’) mental health.

We need to drag some caveats into the light. First, the ecological fallacy may be lurking in this study. The ecological fallacy is when we use of population-level statistics to draw individual-level conclusions. For example, let’s say a quarter of the people in Arkansas eat a lot of pies every year, but nearly everybody in Mississippi eats one pie annually. Statistically, people in Arkansas eat more pies. But on the ground, individuals in Mississippi are more likely to eat pie. Conundrums like this are why we need to be careful about interpreting studies that use sweeping demographic data to get at inherently individual phenomena.

However, the authors partly accounted for this potential stumbling block. The Gallup data offers both country-level and individual responses to questions of meaning and religion, and Oishi and Diener were careful to run analyses on both individual responses and population averages. They found that, indeed, national GDP predicted less religiosity and less personal meaning in both models. The only difference was that, at the level of the individual, GDP remained a significant predictor of meaning even after accounting for religiousness. That is, a person in a poor country would be more likely to find lots of meaning in life than a respondent from a rich nation, even if both respondents were equally faithful.

Second, suicide statistics may less reliable for lower-GDP countries, because poorer nations have flimsier infrastructures for reporting and cataloging such data. This argument is often used to question whether wealthier countries actually have higher suicide rates. However, in this study, self-reported meaning mediated the connection between GDP and suicide rate. That is, it wasn’t national wealth (with its better medical infrastructure and epidemiological records) that predicted suicide rates; it was meaning in life. There might still be biases and stigmas that suppress suicide reporting in religious societies, but considering how well the rest of Oishi and Diener’s model hangs together, it seems likely that meaning in life actually does protect against suicide.

Finally, it’s odd that religion and meaning in life were negatively correlated with social support. This finding flies in the face of nearly all other research on this topic, which suggests that the way social support was measured in this study might have been flawed. The single item the researchers used to measure social support (“If you were in trouble, do you have relatives or friends you can count on to help you whenever you need them?”) may not have translated well to other languages. Alternatively, its mention of “trouble” may have led to connotations of legal or moral difficulties that might have confounded religious responses. Who knows? In nearly every other study on this subject, religiosity has positively correlated with social support. This odd-duck finding may remain puzzling until future studies shed more light on it.

Many very smart people have claimed that life meaning is a major contributor to well-being. Holocaust survivor Viktor Frankl argued that meaning was the basic ingredient in a healthy response to life. And recent research shows that playing an important role in a community, or contributing to the well-being of others, is what gives life meaning. If this claim holds up, then maybe it’s not so surprising that residents of high-GDP countries experience less meaning. The materialistic modus operandi of rich societies usually doesn’t emphasize contributing to others’ well-being, but instead encourages us to focus on ourselves. Few traditional religions would see this as a good thing.

September 23, 2014 The Sam Harris backlash: is sex real?
Recent Comments
0 | Leave a Comment
"Ya, you're lucky if you can escape the golden gold-plated handcuff of academia. I'm going ..."
Positivist The Joys and Challenges of Interdisciplinary ..."
"This blog is still active, yes. I saw that one of your comments got trapped ..."
connorwood The Joys and Challenges of Interdisciplinary ..."
"I’m not sure if these comments are moderated or if this blog is still active ..."
Positivist The Joys and Challenges of Interdisciplinary ..."
"Very intriguing. Would it be more accurate to compare them as different mental constructions, not ..."
Paula Ruddy How Religion Is Like Play
Browse Our Archives
get the latest from
Science On Religion
Sign up for our newsletter
POPULAR AT PATHEOS Public Square
1